P.2 ~ Emerging markets to drive FPU construction over near term

Through the end of the decade, the largest markets for floating production systems are expected to remain Brazil, West Africa, and Southeast Asia. However, there are new areas of growth, particularly in East Africa and the Mexican portion of the Gulf of Mexico. The fastest growing segment is forecast to be gas processing units, namely FLNGs and FSRUs, which are expected to account for 25% of all floating production systems capital expenditures over the next five years. 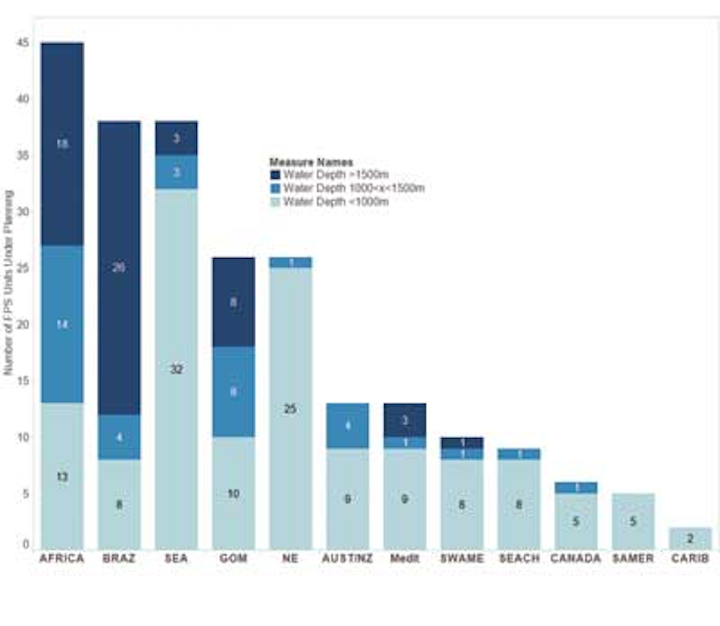 Large FLNG units are expected to account for 75% of the capital cost for projects in Australia over the next five years. This includes Woodside's Browse development, which calls for three units. FEED is now planned to start by mid-2015 with final investment decision targeted for 2016. No new floating production systems are expected in New Zealand in the near future, although there has been some recent exploration activity.

Despite the drop in oil prices, a number of projects are moving ahead in Southeast Asia. Hess recently awarded an FSO contract for its North Malay Basin project, which will process gas on a fixed platform and send condensate to the FSO. Kris Energy is progressing plans for its block A development offshore Cambodia, after taking over operatorship from Chevron in 2014. Projects are expected to be tendered later this year include a TLP and FPSO for Talisman's Red Emperor field off Vietnam and three projects off Indonesia – Premier Oil's Ande Ande Lumut FPSO, Husky's Madura MDA/MBH Production Barge, and possibly the third tender for Chevron's Gendalo/Genham production barges.

Over the next five years, more than $5 billion in capex is expected for various FLNG projects in Southeast Asia, particularly the Abadi field development in Indonesia. A 2.5 mtpa FLNG facility is planned for Phase 1, which is completing FEED. Another facility would be required for Phase 2, which is scheduled to enter FEED this year.

A mix of FPSOs, production semisubmersibles, spars, and FLNG units will account for $10 billion of investment. At least eight FLNG projects have been proposed, but most are not likely to move forward in the near future. SBM Offshore is scheduled to deliver an FPSO for Shell's Stones development in 2016. This will be the second FPSO on the US side of the Gulf of Mexico and the deepest floating production unit – moored in 2,900 m (9,514 ft) of water. Another FPSO could be required by the end of the decade for BP's Kaskida field, located in 1,800 m (5,905 ft) of water in block KC 292.

However, there has been a recent trend toward tiebacks to existing facilities in the US Gulf, including Noble's Big Bend and Dantzler fields, ExxonMobil's Hadrian gas field, and Chevron's deepwater Buckskin/Moccasin de-velopment. Tieback to an existing asset can provide a faster and less expensive alternative to a stand-alone facility, depending on the distance, capacity, and charges of the host facility.

Following the reforms in Mexico, there will certainly be an increase in the number of floating production units from the one FSO and one FPSO currently in operation, in addition to a few small well testing units. However, this will take time. After the new leases are granted, it will take at least two to three years before contracts are placed for these new facilities. PEMEX began discussions for two FPSOs in 2013, but has yet to place the contract. These would be leased units – a very large unit for the Ayatsil/Tekel field and a dynamically positioned unit to perform extended well tests in various locations.

Twenty-six projects are in the planning phase in Northern Europe, predominantly the UK and Norway. FPSOs are the likely solution for 80% of developments, with 20% using FSOs and production semisubmersibles. Only two new floating production projects were sanctioned in 2014, down from three in 2013 and four in 2011 and 2012. This is largely due to increasing costs, which have forced review for new developments including Rosebank in the UK and Johan Castberg in Norway.

There has been much discussion of production from the Arctic. While there are interesting prospects in areas farther north of current facilities, we do not expect to see any arctic floating production units before the end of the decade.

Energy Maritime Associates (EMA) has identified 235 projects that potentially could require a floating production system. These projects are declared discoveries or planned developments where a floating production or storage system could be a development option. Since last year, there have been declines in the number of viable projects off Africa, Brazil, and Southwest Asia. These are predominantly deepwater fields with insufficient recoverable resources. However, these declines have been offset by new potential projects in the North Sea, Gulf of Mexico, and Southeast Asia.

By level of development

Of these 235 potential projects, 29% are in the bidding/final design stage, with Africa and Southeast Asia the most active regions. Final investment decisions and contract awards for these projects are possible in the next 12-24 months. 46% of projects are in the planning stage. A number of these projects from northern Europe, Gulf of Mexico, and Brazil have yet to move to the bidding/final design stage due to technical complexity and regulatory environment. The final 25% are in the appraisal stage, predominantly deepwater discoveries in Brazil and Africa.

Many of the smaller deepwater developments will struggle to be economically viable in the current environment. However, the larger deepwater fields, such as Brazil's presalt fields should remain attractive. BG and Petrobras reported that their presalt developments had a break-even of $45/bbl.

The results of EMA's 2015 Floating Production Industry Survey largely fulfilled the firm's expectations, with a few exceptions. In terms of regions with the largest growth opportunities, most respondents agreed that Brazil, West Africa, and Southeast Asia would be the dominant areas. Very few were excited about the prospects for Australia, while EMA believes that there will be a few, extremely large FLNG projects there in the next five years. Perhaps the lack of enthusiasm is explained by the limited number of projects, despite the very large capex.