Crude oil production in the federal Gulf of Mexico is expected to continue to rise over the next two years, according to a recent report issued by the US Energy Information Administration (EIA). 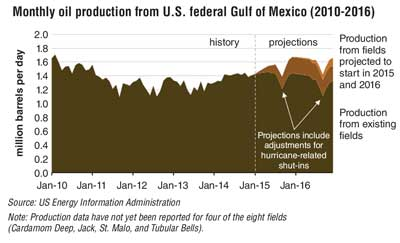 Crude oil production in the federal Gulf of Mexico is expected to continue to rise over the next two years, according to a recent report issued by the US Energy Information Administration (EIA).

Because of the long timelines associated with Gulf of Mexico (GoM) projects, the recent downturn in oil prices is expected to have minimal direct impact on GoM crude oil production through 2016, the report states.

The forecasted production growth will be driven both by new projects and the redevelopment and expansion of older producing fields, says EIA. Five deepwater projects began in the last three months of 2014: the Stone Energy-operated Cardamom Deep and Cardona projects; the Chevron-operated Jack/St. Malo fields; the Murphy Oil-operated Dalmatian project; and the Hess-operated Tubular Bells project.

Also occurring at the end of 2014 was the redevelopment of Mars (Mars B) and Na Kika (Na Kika Phase 3), both of which are mature fields. Cardamom Deep, Jack/St. Malo, and Tubular Bells were slated for a late 2014 start-up as well. The EIA did note that while industry press releases have indicated these fields have started producing, their production data have not yet been reported to the Bureau of Safety and Environmental Enforcement (BSEE) under the US Department of the Interior.

The relatively high number of fields that came online in 2014, and are scheduled for first oil in 2015 and 2016, reflects the revival of interest and activity in the GoM following the Macondo incident and subsequent deepwater drilling moratorium. While the moratorium officially lasted from April 30 to October 12, 2010, there were relatively few field start-ups in 2011 through 2013, the report notes.

Thirteen fields are expected to start up in the next two years, eight in 2015 and five in 2016. The report also noted that the high cost of surface structures limits their application to large fields. Those fields with reserves not large enough to justify the necessary capex are expected to use subsea tieback systems to connect to nearby existing platforms. More than half of the projects starting up in 2015 and 2016 will be subsea tiebacks to existing production platforms. These new projects, combined with continuing production from the developments brought online in late 2014, are forecast to add 265,000 b/d by the end of 2015. The production estimates for 2015 and 2016 include adjustments to account for seasonal shut-ins from hurricanes.

The current low oil price adds uncertainty to the timelines of deepwater GoM projects, says EIA, with projects in early development stages exposed to the greatest risk of delay. In an effort to reduce this risk, producers are collaborating to develop projects more cost-effectively, to shorten the time to final investment decision and first production, and by sharing development costs. For instance, Chevron, BP, and ConocoPhillips recently announced a collaborative effort to explore and appraise 24 jointly held offshore leases in the northwest portion of the Gulf of Mexico's Keathley Canyon.

Big Foot heads out to the deepwater Gulf

Chevron Corp. says that itsBig Foot platform safely sailed away from Corpus Christi, Texas, and is now en route to its offshore location in the Walker Ridge Area of the deepwater GoM.

The platform was successfully floated through the La Quinta Ship Channel and is being towed to site at approximately 225 mi (360 km) south of New Orleans, Louisiana, in water depths of 5,200 ft (1,600 m).

Once safely anchored to the ocean floor, the offshore hook-up and commissioning work will commence, followed by the development well drilling and completion campaign.

TheBig Foot platform is a dry-tree extended tension-leg platform (ETLP) with an onboard drilling rig and production capacity of 75,000 b/d of oil and 25 MMcf/d of natural gas. The hull was fabricated in South Korea, with the topsides fabricated in Ingleside, Texas. Up to 200 people can be accommodated on the platform.

TheBig Foot field was first discovered in 2006, and Chevron sanctioned the project in 2010. The field is estimated to contain total recoverable resources in excess of 200 MMboe and will have an estimated 35-year production life. First oil and gas is expected in 2015.

BP has issued a new detailed report on its efforts to clean up and restore the Gulf in the wake of the 2010 Macondo incident.

The company has been working with state and federal trustees through the natural resource damage assessment (NRDA) process to collect data to evaluate the potential for injury to wildlife and habitat, and the recreational use of these resources.

According to BP, more than four years of environmental assessment data suggests that most of the impact on the environment was of short duration and limited in geography. A number of physical, biological, and chemical processes acted upon the oil after it was released from the wellhead, causing the volume and concentration of oil to decrease as it travelled away from the well. In the five years since the spill, scientific data and studies are showing that the Gulf environment is returning to its baseline condition.

The Gulf of Mexico Environmental Recovery and Restoration report also indicates that impacts from the spill largely occurred in the spring and summer of 2010.

The report is based on scientific studies that government agencies, academic institutions, BP, and others conducted as part of the spill response, the ongoing NRDA process or through independent research.

BP and the trustees have been using the cooperative field work data developed through the NRDA process to evaluate injuries to natural resources and to guide the selection of early restoration projects and longer-term restoration of the Gulf Coast. The goal is to return the environment to its baseline condition – the condition it would be in if the accident had not occurred.

Since May 2010, BP has worked with state and federal trustees to develop and implement more than 240 initial and amended work plans to study wildlife, habitat and the recreational use of these resources. By the end of 2014, BP says it had spent approximately $1.3 billion to support the assessment process. More details on the report can be found on BP's website.