Report: Shale could propel US oil production to ‘all-time high’

Rystad Energy predicts US oil production will grow so fast that an all-time high of 10 MMb/d could be reached before the end of the year. 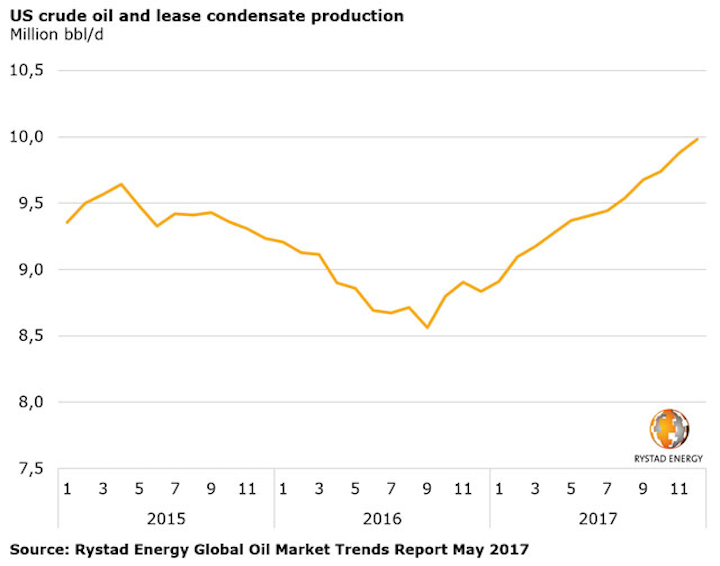 OSLO, Norway – Rystad Energy predicts US oil production will grow so fast that an all-time high of 10 MMb/d could be reached before the end of the year.

The growth stems fromshale drilling, as the more modest growth from Gulf of Mexico deepwater fields is offsetting declines from other US conventional oilfields.

In a monthly report onoil market trends, the analyst found US oil production growing at 95,000 b/d per month during 2017.

The historic record of 10 MMb/d was reached during November 1970, when US oil prices were still less than $3, Rystad says. This record was close to being surpassed in 2015, when US production peaked during April at 9.6 MMbbl. Production then dropped 1 MMb/d over 18 months as oil prices fell from more than $100 to less than $40.

Based on proprietary and detailed well level data, Rystad Energy sees current US production bouncing back twice as fast as it dropped, reaching 9.4 MMbbl today (May 31). This very steep growth comes with US oil prices locked below the price most analysts estimated as a minimum to grow its oil production.

The US Energy Information Administration just released its latest official data for March at 9.1 MMb/d. Rystad Energy believes this implies another upward revision of the EIA’s official oil production outlook for the US, which is now at 9.74 MMbbl for December 2017.

Bjørnar Tonhaugen, VP Oil Markets at Rystad Energy, said: “US oil production has grown faster at $50 than any analysts in the market predicted. As these numbers are getting confirmed, the initial optimism about OPEC’s temporary cuts may turn to increasing skepticism aboutOPEC’s choice of policy once the current output deal expires next year.”