Report warns that ‘recovery foundations’ not as solid as initially believed

Douglas-Westwood’s most recent Upstream Investment Outlook for 1Q 2017 warns of a number of challenges that could still effect upstream investment over the next few years. 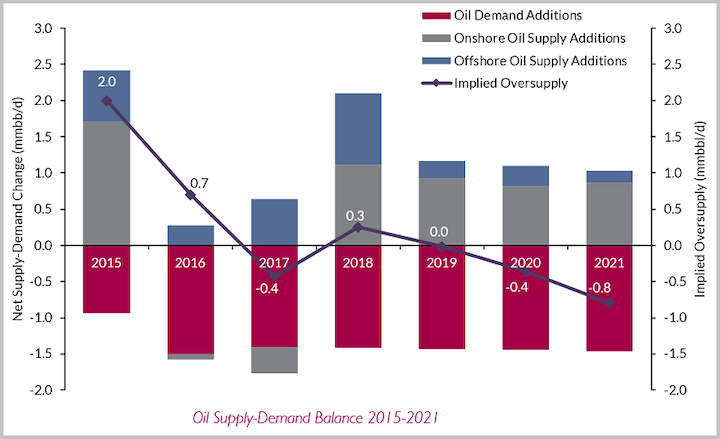 LONDON– Douglas-Westwood’s (DW) most recent Upstream Investment Outlook (UIO) for 1Q 2017 has been released and warns of a number of challenges that could still effect upstream investment over the next few years.

DW said that sentiments in the upstream oil and gas market “have undoubtedly improved since turn of the year,” which saw the implementation of OPEC’s long-awaited output cut. Attention has shifted from lay-offs and spending cuts to opportunity seeking and renewed project sanctioning activity. However, the analyst firm identified some substantial threats to the upstream investment outlook through the coming years.

Chief among these issues is supply concerns. DW said that coordinated OPEC and non-OPEC production cut will push the oil market into undersupply this year; however, vast volumes of offshore supply to be added next year from projects sanctioned pre-downturn, tipping market back into oversupply.

The analyst firm also informed that operators are likely to continue to focus on gas exploration and export methods (such as LNG and FLNG) over the long term to adapt to shifting demand patterns.

Another concern is that the financial health of E&Ps has been significantly dented by the downturn, while non-OPEC NOC’s are particularly well-positioned, having made substantial cuts to dividends and capex.

Onshore is identified as the first area of development to return as oil prices continue to stabilize and trend upwards, due to short lead times and relatively strong returns on investment – as has already been seen in the US since mid-2016.

A difficult two years has led to a strong reaction from the oilfield services supply chain, from cost reductions to M&A activity. However, significant excess capacity still exists – particularly offshore, the UIO posits.

Oil prices hovered in the mid-$50/bbl range for much of 1Q, however a quicker than expected rebound in US onshore activity – accompanied by significate inventory builds – has provided pause for caution.

While the macroeconomic environment has undoubtedly improved, the foundations of the recovery may not be as solid as initially thought, with large uncertainties surrounding OPEC and non-OPEC compliance over the rest of 2017, as well as the significant volumes of crude executed to be added in 2018, which will likely tip the market back into oversupply.