Statoil has started production from the Gina Krog oil and gas field in the Norwegian North Sea. 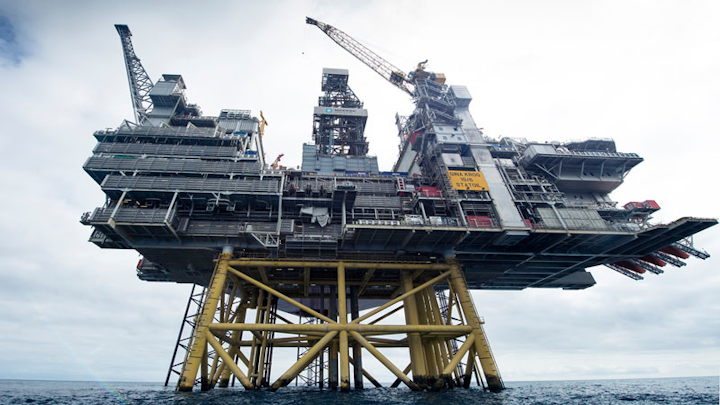 STAVANGER, Norway – Statoil has started production from the Gina Krog oil and gas field in the Norwegian North Sea.

More than 600 personnel have been working at the field location since last August preparing the platform for production.

Gina Krog features a fixed production platform with 20 well slots – the initial plan is for 11 producer and three injector wells – and an oil storage vessel (FSO) alongside, in a water depth of 110-120 m (361-393 ft).

The oil is exported via buoy loaders, while produced gas is sent to the Sleipner A platform to the southeast for final processing and onward through existing pipelines to markets in Europe.

Injection gas is imported through the Zeepipe 2A trunkline, operated by Gassled.

The initial Gina Krog exploration drilling found gas in 1974, with oil proven in 2007 and 2008. Statoil will operate the production facilities from its Stavanger offices, with the helicopter and base services run from Sola and Dusavika.

In addition, Gina Krog will help extend the productive lives of Sleipner A and the onshore processing plant at Kårstø.

Three of the four main fields discovered on the Utsira High region are now producing.Edvard Grieg started up in November 2015, followed last December by Ivar Aasen.

The Norwegian Petroleum Directorate points out that Gina Krog has been prepared for phasing in current and future discoveries in the area, and will be tied in to a planned joint scheme supplying all the Utsira High facilities with power from shore. This should be in place in 2022.