While the trend in spending for oil and gas companies since the crash in oil prices has been in a steep decline, production has remained relatively stable since 2015, according to a new report from Rystad Energy. 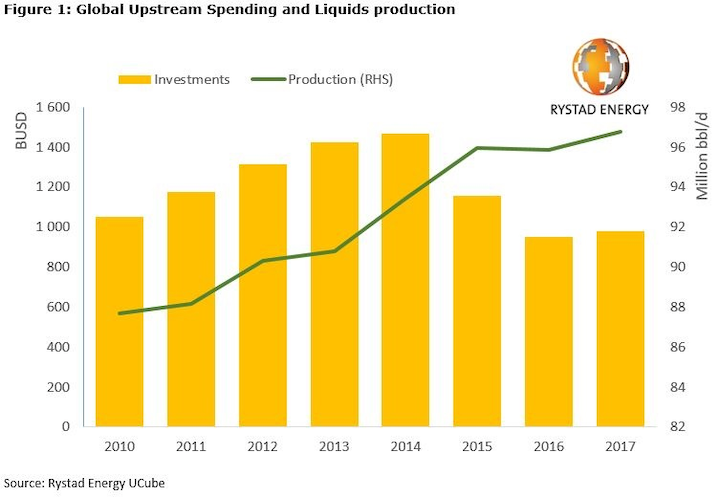 OSLO, Norway – While the trend in spending for oil and gas companies since the crash in oil prices has been in a steep decline, production has remained relatively stable since 2015, according to a new report from Rystad Energy.

This might lead to the conclusion that companies have found ways to remain just as productive in the new price environment, but detailed analysis reveals that the production plateau is largely derived from projects approved during pre-2014 prices coming online.

However, the decrease in oil and gas spending has had a material impact on the production decline for maturing oil fields, where the drilling of new wells has fallen by 50%, according to the report.

This lower level of activity on already-declining fields has had quite a dramatic impact on decline rates. Mature, offshore oil fields now decline at a rate of -8% per year, whereas the same fields declined by only -5% in 2014, before the decline in drilling activities.

“Old offshore fields are now declining faster, and as a consequence, one million barrels of oil have been removed from production balances,” said Per Magnus Nysveen, Head of Analysis at Rystad Energy. “This impact cannot be properly accounted for unless you follow old, small fields at a frequent and detailed level.”

Global oil and liquids production has reached 97 MMb/d as of early October, according to data analysts at Rystad Energy. This is exactly 10 MMb/d higher than at the start of this decade. Now the Oslo-based research company predicts a continuous shift of market share from conventional oil production to US shale oil.

“We expect US oil production will continue to ramp-up towards its full potential of 15 MMbbl within the next five years, and then we would again see quite a dramatic tightening of the oil market,” said Nadia Wiggen Martin, Vice President of Markets at Rystad Energy.