The US remained the world’s top producer of petroleum and natural gas hydrocarbons in 2016 for the fifth straight year, according to the US Energy Information Administration. 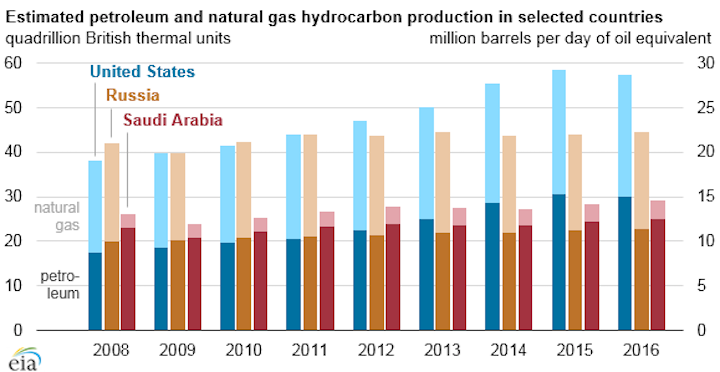 In the US, crude oil and lease condensate accounted for roughly 60% of total petroleum hydrocarbon production in 2016. In Saudi Arabia andRussia, this share is much greater, as those countries produce lesser amounts of NGPL, and they also have much smaller volumes of refinery gain and biofuels production.

Russian hydrocarbon production has been rising as capex on exploration and production increased. Russia also has favorable tax regimes and exchange rates (Russian company expenditures are in Russian Rubles, but oil sales are in US dollars) that resulted in record levels of Russian petroleum production in the second half of 2016. Russian natural gas production also rose in 2016, in part to meet growth in European natural gas demand.

In 2016, natural gas demand increased by an estimated 6% in European countries that are members of the Organization for Economic Cooperation and Development.

In contrast to past actions to raise or lower oil production levels to balance global oil markets, Saudi Arabia did not reduce its petroleum production between late 2014 and 2016 in an effort to defend its market share, even as prices remained low and world oil inventories continued to grow. In 2016, Saudi Arabia’s total petroleum and natural gas hydrocarbon production rose by 3%.

The STEO provides a production forecast for members of OPEC as a whole rather than for individual OPEC countries. OPEC liquid fuels production, which was 39 MMb/d in 2017, is forecast to be 39.2 MMb/d in 2017 and 39.9 MMb/din 2018.

This outlook takes into account recent agreements among OPEC member countries, as well as pledges by key non-OPEC producers, including Russia, to restrain production. At its May 25 meeting, OPEC agreed toextend the production cuts it originally announced in November 2016 through March 2018.

Also in the June STEO, theEIA updated on its average monthly per-barrel prices. North Sea Brent crude oil spot prices averaged $50/bbl in May, $2/bbl lower than the April average. EIA forecasts Brent spot prices to average $53/bbl in 2017 and $56/bbl in 2018. West Texas Intermediate (WTI) crude oil prices are forecast to average $2/bbl less than Brent prices in both 2017 and 2018. NYMEX contract values for September 2017 delivery that traded during the five-day period ending June 1 suggest that a range of $39/bbl to $64/bbl encompasses the market expectation for WTI prices in September 2017 at the 95% confidence level.