Investigation under way into fire at Enchilada platform in the GoM

Shell, BSEE, and the Coast Guard are investigating the cause of a fire that occurred this morning at the Enchilada platform in the US Gulf of Mexico. 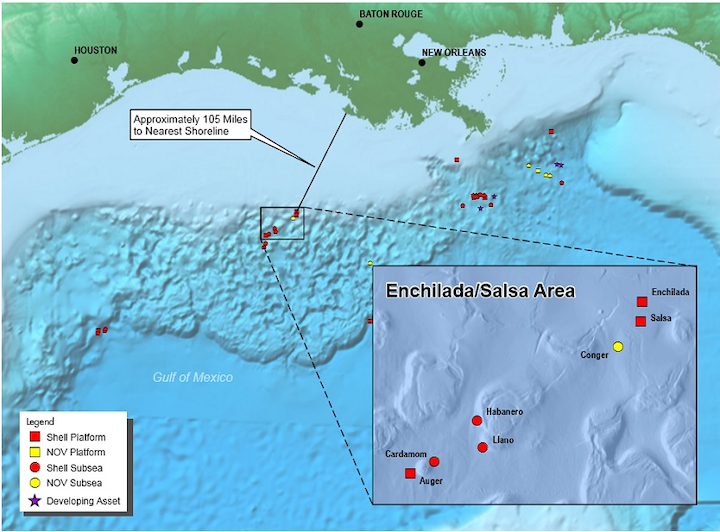 Enchilada platform in block 128 in the Gulf of Mexico

NEW ORLEANS– Shell, the Bureau of Safety and Environmental Enforcement (BSEE), and the US Coast Guard (USCG) are investigating the cause of a fire that occurred this morning at the Enchilada platform in the US Gulf of Mexico.

All 46 personnel working at the Enchilada facility were safely evacuated. Two Shell employees were injured. Both have been treated and released from the hospital.

The operational incident involves a fire associated with a 30-in. gas export pipeline. Production at the Auger and Salsa platforms and nearby fields have been shut in.

Shell said that there is no visual evidence of oil on the water near the incident site. The source of the fire is isolated. For safety reasons, the company said that it has chosen to allow the gas discharge (3-to 6-ft flame) to burn while the pipeline is being safely depressurized.

USCG and Shell contracted vessels are on site monitoring the situation. As a precautionary measure, a Clean Gulf Association oil spill response vessel has been mobilized, and other vessels are on standby.

Shell personnel performed a visual assessment of the Enchilada platform and based on those observations, the asset appears to be structurally sound. A more detailed analysis of the platform will be conducted, the company said.