The new magic number in the oil industry is $50/bbl, according to analysis offered in a recent Bloomberg report. 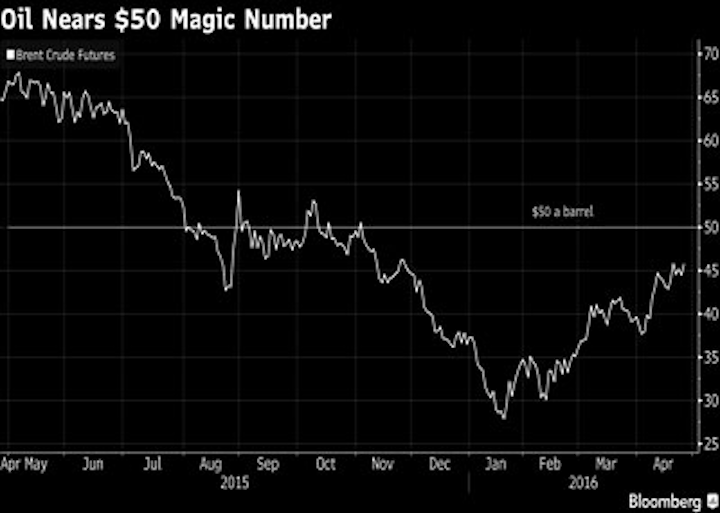 NEW YORK CITY – The new magic number in the oil industry is $50/bbl, according to analysis offered in a recent Bloomberg report.

In that report, BP, Nabors Industries Ltd., and Pioneer Natural Resources Co. all said that prices above $50/bbl will encourage more drilling or provide the needed boost to cash flow. Withoil moving close to $45/bbl, an industry that has been shaving costs to stay competitive is ready for signs of stability at a price level less than half of 2014’s average.

At an average price of $53/bbl, the world’s 50 biggest publicly traded companies in the industrycan stop bleeding cash, according to a recent study conducted by oilfield consultant Wood Mackenzie.

Nabors, which owns the world’s largest fleet of onshore drilling rigs, said it has already been talking with several large customers about plans to boost work in the second half of the year if prices rise “comfortably” above $50/bbl.

“It’s not just about touching $50,” Fraser McKay, vice president of corporate analysis at Wood Mackenzie told Bloomberg. “It’s about touching, maintaining, and having the perception of future prices above $50/bbl before you start sanctioning projects that are economic at $50/bbl.”

The global oil industry slashed more than $100 billion in spending last year and is in the midst of further cuts this year to survive what Schlumberger has called the industry’s worst-ever financial crisis. In North America alone, spending is expected to drop by half from last year.

Prices have rebounded by about two-thirds from a 12-year low, with Brent, the international crude benchmark, trading above $45/bbl on April 26. The rally has explorers from BP to Pioneer looking ahead to an eventual recovery as they release first quarter earnings this week.

Next year, BP will be able to balance cash flow with shareholder payouts and capital spending at an oil price of $50 to $55/bbl, down from a previous estimate of $60/bbl, the report said. Pioneer expects to add as many as 10 horizontal drilling rigs when oil reaches $50/bbl and the outlook for supply and demand of crude is positive, the company said on April 25.

For every $5 that oil prices climb, above a baseline of $37/bbl, Continental Resources Inc. adds another roughly $200 million in revenue, COO Jack Stark was quoted to say. By the time oil prices reach $52/bbl, the Oklahoma City-based explorer would probably look at adding more rigs, he said.

Exactly when oil prices will hit that level and how long they need to stay there is a question no one can say for sure, the report observed. Nabors said the activity could start up in the middle of the third quarter or into the final three months of this year. Continental estimated that supply and demand could be nearing balance later this year and be “absolutely in balance” or in need of more oil next year. “The absolute timing may be off a bit,” Stark said, “but ultimately it’s going to happen.”