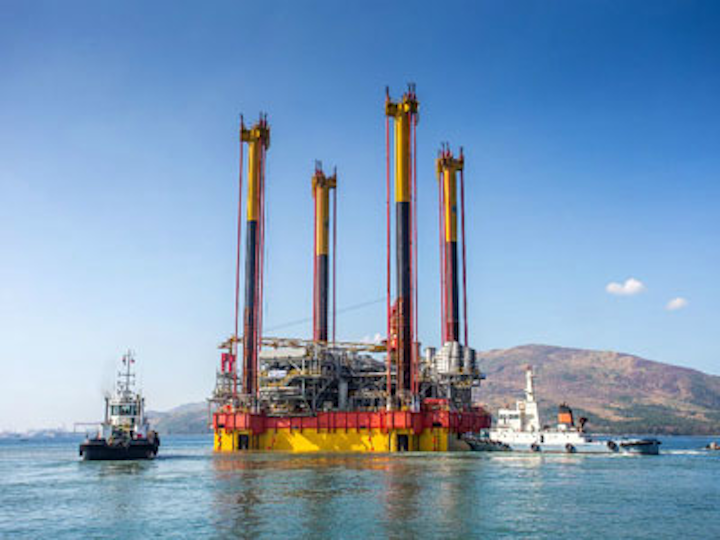 SCHIEDAM, the Netherlands -During a 48-hour operation, Mammoet recently installed the Malampaya Phase 3 Depletion Compression Platform in the West Philippine Sea for its client Shell Philippines Exploration B.V. Mammoet was contracted for the offshore operation to lower the DCP legs and lift the platform to its final height.

The Malampaya Depletion Compression Platform (DCP) is a new self-installing platform, which floats into place over its end-location, after which the legs are lowered onto the prepared seabed. It uses a pre-installed jacking system to enable the 80-m (262-ft) legs to be lowered in order to lift the platform from the water to its final position. This technology avoids the need for the vessels that are normally required for an offshore platform installation.

The DCP’s end-location is next to the Malampaya Shallow Water Production Platform (SWP), to which it will be linked by a permanent bridge, also to be installed by Mammoet.

Mammoet was involved in DCP’s construction, assisting with lifting and lowering the platform during the fabrication process. To keep the platform level at sea, strand jacks must act simultaneously in opposite directions to buffer the differing movements of the DCP before the legs are positioned, and the platform is raised. To facilitate this precise calibration, parts of the strand jack include special guying valves and a new computer system to create a constant tension to deal with the movement of the platform on the water.

The platform is now being held in its raised position, legs secured to the seabed, awaiting the completion of the operation to weld it in place and install the connecting link-bridge.

The Malampaya project, located off the coast of Northwest Palawan, the Philippines, is aShell-operated initiative on behalf of its joint venture partners and the Philippine government.

Now in Phase 3, the new platform will extract natural gas from the Palawan basin and process it in a shallow water production platform. It will then transport the gas along a 504-km (313-mi) subsea pipeline towards the onshore gas plant and, eventually, to its power plant customers.