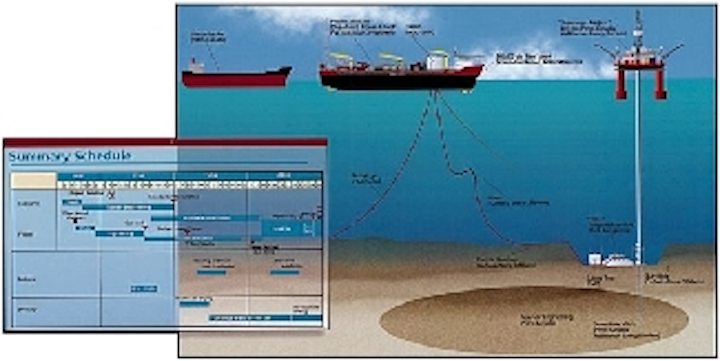 The Grand Banks off the eastern coast of Newfoundland is gradually becoming a major oil and gas producing province. The area's recognition has been driven almost exclusively by the Hibernia Field, but that's about to change. The Terra Nova FPSO (floating production, storage, and offloading) vessel has arrived at the Bull Arm construction site in Newfoundland for final hookup and commissioning work. Canada's second largest oil field will be onstream in less than a year.

Terra Nova is located in the Jeanne d'Arc Basin on the Grand Banks in 95 meters water depth and is situated some 35 km southeast of Hibernia and 350 km east-southeast of St. John's, Newfoundland.

The Terra Nova Field consists of three geologic fault blocks: the Graben, East Flank, and Far East. Through five delineation wells, five major and two minor oil-bearing sands have been identified in the structure at approximately 3,200 meters. Total reserves for the field have been estimated to be 400-500 million bbl of oil and 269 Bcf of gas. The Canada-Newfoundland Offshore Petroleum Board has estimated that Graben and East Flank make up the majority of the reserves with an estimated 200-405 million bbl of oil. The undelineated Far East portion of the field, if productive, could hold an additional 250 million bbl potential.

The project partners, however, peg the reserves at a more likely 370 million bbl for Graben and East Flank and 100 million bbl for Far East. This compares to 666 million bbl of oil and 1.017 Tcf of gas on Hibernia. The field is estimated to have a minimum production life of 15 years.

PetroCanada initially drilled the discovery well, K-08, in 1984. Following K-08, eight other wells were drilled in the field, six of which were successful, through 1988. In 1995, PetroCanada announced it was proceeding with preparation of a development application for submission to the Canada-Newfoundland Offshore Petroleum Board and selected an FPSO and the Grand Banks Alliance was formed to execute the project late the next year.

In early 1997, the Terra Nova Alliance was formed of owner companies in the field and members of the Grand Bank Alliance, and preliminary design and engineering for the development began. Included are PetroCanada (operator - 29%), Mobil Oil Canada (22%), Husky Oil (17.5%), Norsk Hydro (15%), Murphy Oil (12%), Mosbacher Operating (3.5%), and Chevron Canada (1%).

Following approval by the Environmental Assessment Panel in August 1997, the Canada-Newfoundland Offshore Petroleum Board approved the development plan and the project was sanctioned in 1998.

Production from Terra Nova is expected to flow at a rate of 115,000 b/d of oil from the Graben and East Flank for the initial six year period. The production is then expected to decline until no longer economical, which has been estimated at the year 2014 with a cumulative production of 370 million bbl of oil.

However, the Terra Nova Alliance has said that should drilling prove the existence of economically recoverable hydrocarbons in the Far East block, production could economically be sustained to the year 2017. This would entail drilling an additional five producers and five water injection wells.

The development calls for 24 wells to be drilled through seven subsea templates located in four glory holes producing to the FPSO. The glory holes measure 16 meters wide at the bottom by 36 meters wide at the top by 10 meters deep, and protect the templates from iceberg impact. The subsea installations will be produced to the FPSO via trenched flowlines. The FPSO will in turn offload from the stern to bow-loaded shuttle tankers.

The cornerstone of the development scheme is the Terra Nova FPSO. The Terra Nova FPSO is one of the largest of its kind ever built. The vessel measures 292.2 meters long and 45 meters wide with a displacement of 196,000 tons. The FPSO was built with a double hull and reinforced to withstand iceberg impact. Total storage capacity on Terra Nova is 960,000 bbl, which equates to six days storage at peak production and a maximum handling capacity of 150,000 b/d. The vessel is also equipped with a tandem offloading system designed for connection and disconnection to shuttle tankers in up to five meter significant wave heights.

The vessel design and engineering was performed by ShawMont Brown & Root and Daewoo Heavy Industries of Okpo, South Korea was selected to construct the vessel's steel hull. Construction of the hull began in August of 1998. Following sea trials, the vessel left the shipyard for Newfoundland in mid-March of this year, and arrived at the Bull Arm site on May 12.

At Bull Arm, eight main modules of the topsides facilities are being installed, including the processing unit. The unit is designed to produce 125,000 b/d of stabilized crude oil, inject up to 270,000 b/d of seawater, and compress 300 MMcf/d of gas for gas lift and pressure maintenance. Total hookup and commissioning time is estimated to be seven months.

At present, development drilling is ongoing at the northeast and southwest glory hole sites. Three wells have been completed to date. Flowline trenching operations began in early May and are expected to be completed by the end of next month using two vessels, the Smit Pioneer and the CSO Marianas.

By the time the FPSO is on location, six of the 24 wells will have been drilled. Production is expected to commence in the first quarter of next year at a rate of 125,000 b/d of oil.