Oil production in the federal Gulf of Mexico waters grew 6% last year, according to a new report issued by the US Energy Information Administration.

Oil production in the federal Gulf of Mexico waters grew 6% last year, according to a new report issued by the US Energy Information Administration.

The report, "Short‐Term Energy Outlook Supplement: Key drivers for EIA's short‐term U.S. crude oil production outlook," says that oil production in the federal GoM is projected to have increased from about 1.31 MMb/d in January to about 1.39 MM b/d in December 2012.

The increase was driven by the initiation of production at 13 new deepwater fields with a combined peak production of about 195,000 b/d, as well as the restart of the Mad Dog field, which had been offline since April 2011. 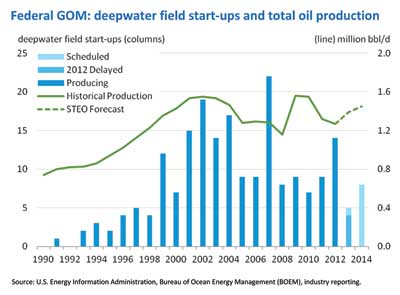 Also contributing to the increase was the start‐up of the Tahiti Phase 2 redevelopment project, as well as those deepwater fields that began production in 2011 but continued to increase production during 2012.

Development of the Tubular Bells field is proceeding on schedule, with the drilling campaigns under way and construction of the spar platform ongoing. Project operator Hess Corp. provided an update at Offshore's Topsides conference recently held in Galveston, Texas.

The drilling program began last year, and theStena Forth has been onsite since April. To date, it has drilled nine topholes and is currently drilling the second well. When the drilling program concludes, the project will have three to five producers, and two to three water injection wells.

The subsea facilities will be tied back to a Williams Partners-owned floating production spar (FPS) with a 50-person accommodation capacity. Hess will initially operate the production facility.

The spar platform is designed to handle:

Export from the FPS will be through Williams' existing pipeline systems, including its 12-in. oil line and its 12-in. natural gas line.

The Tubular Bells project was sanctioned in 2011 with Hess having a 57.14% working interest as operator. Chevron has the remaining 42.86% interest.

The US Interior Department and the Bureau of Ocean Energy Management have announced that Central Gulf of Mexico Lease Sale 227 will offer 38.6 million acres offshore Louisiana, Mississippi, and Alabama.

The sale is scheduled for March 20, 2013, in New Orleans, and includes all unleased areas in the Central Gulf of Mexico Planning Area. It will be the second such sale under the 2012-2017 OCS leasing program.

The terms of this sale include conditions the BOEM says will ensure both orderly resource development, and protection of the human, marine and coastal environments. These include stipulations to protect biologically sensitive resources, mitigate potential adverse effects on protected species, and avoid potential conflicts associated with oil and gas development in the region.

The semisubmersible hull for Chevron's Jack/St. Malo deepwater Gulf of Mexico project has sailed out of the Samsung Heavy Industries yard in Geoje, South Korea, bound for the Kiewit yard in south Texas.

At 56,000 metric tons (61,730 tons), the hull is the world's largest to date, said marine contractor Dockwise. The successful float-on operation was the first for the company's newDockwise Vanguard heavy transport vessel. The hull is scheduled to arrive at the Kiewit yard mid-April.