In September, the North Caspian Operating Co. (NCOC), led by Eni, officially tapped the super-giant offshore oilfield, Kashagan, in the Kazakhstan sector of the Caspian Sea. 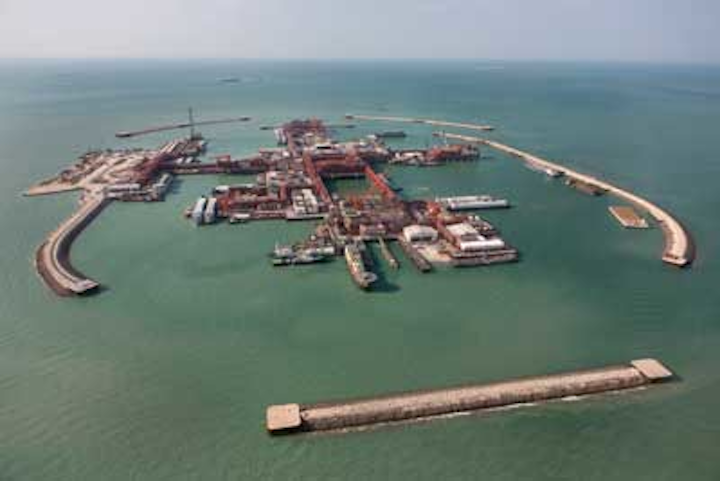 In September, the North Caspian Operating Co. (NCOC), led by Eni, officially tapped the super-giant offshore oilfield, Kashagan, in the Kazakhstan sector of the Caspian Sea. Located some 80 km (49.7 mi) southeast of Atyrau, Kashagan is the largest oil accumulation in the North Caspian Sea with estimated oil in place of around 35 Bbbl.

Future phases of development could significantly increase production volumes. It is Kazakhstan's first offshore oil development, and has an estimated 13 Bbbl of proved and recoverable reserves. Named after a 19th century Kazakh poet from Mangistau, Kashagan is the largest oil field to be discovered in the past 35 years.

The recent start of the first of the 40 wells in the initial phase of production comes eight years later than originally anticipated. Since the field's discovery in 2000, the consortium has invested more than $40 billion in the project, making Kashagan not only the largest oilfield outside the Middle East, but also one of the world's most expensive.

Perhaps even more impressive is the complexity of the project. The Kashagan reservoir is about 14,000 ft (4.267 m) below the seabed with high pressure (770 bar/1,168 psi initially); elevated levels of hydrogen sulfide (15% H2S); and some carbon dioxide (4% CO2) in shallow, ice-prone water.

This part of the North Caspian is extremely shallow (average depth: 3.3 m/11 ft) and is subject to weather extremes: violent storms in summer and winter temperatures as low as -40°C. There are also significant fluctuations in water level and heavy drift ice during the winter months. Ice build-up is exacerbated through the combination of shallow water, low salinity, and low temperatures.

During Phase I, around half of the gas produced will be re-injected into the reservoir. Separated liquid and raw gas will be taken by a dual, 57-mi (92-km) pipeline system to the Bolashak onshore processing plant in Atyrau oblast, where export quality oil will be produced. Some of the processed gas will be sent back offshore for use in power generation while some will be used to generate power at the process plant itself.

Production from the initial phase of development will reach 180,000 b/d of oil and then rise to the full Phase 1 target of 370,000 b/d. A possible second phase would boost production to 1.5 MMb/d. However, the partners will need to determine if they will be able to recoup their expenses and reach an acceptable level of profitability before the project's production-sharing agreement terminates in 2041.

Agip KCO awarded a $155-million contract for construction of elements of the Kashagan production facilities to the Boskalis/Archirodon joint venture in early 2003. Almost 4 million metric tons (4.4 million tons) of rock was required for the construction of the island group and its ice barriers.

The scope of work for the islands included the construction of four outer main ice barriers, three inner ice barriers, the riser island (including flare extension) and three pipe rack cofferdams. The cofferdams, with a total length of 715 m, each consist of two sheet pile walls, between which quarry run was placed.

NCOC acts on behalf of seven co-venture consortium partners as operator, appraising and developing the hydrocarbon assets of 11 offshore blocks under the North Caspian production-sharing agreement. Their equity interests are: KazMunayGas 16.81%, Eni 16.81%, ExxonMobil 16.81%, Shell 16.81%, Total 16.81%, ConocoPhillips 8.40%, and INPEX 7.56%. Recently, ConocoPhillips sold its interest in the project to KazMunayGas for approximately $5.4 billion.

Major contractors and service suppliers for the Kashagan project included:

Boskalis/Archirodon. Built the complex of rock islands in 4-m water depth at a location some 75 mi offshore

Cybernetix. Suite of subsea temperature monitoring systems for installation on the multi-phase pipelines, as part of the hydrate prevention and management program

Saipem. Fabrication, assembly, transport. and installation of the flares and piles sustaining the offshore structures, as well as installation of 14 module barges. The scope includes procurement, fabrication and connection of associated mooring, protection, and interconnecting structures

Aker Kvaerner/Ersai. Hook-up and commissioning of the offshore facilities plus inshore completion