When Petrobras brought the deepwater Sapinhoa oil field on production early in 2013, it put added attention on what already is one of the hottest plays in the world. 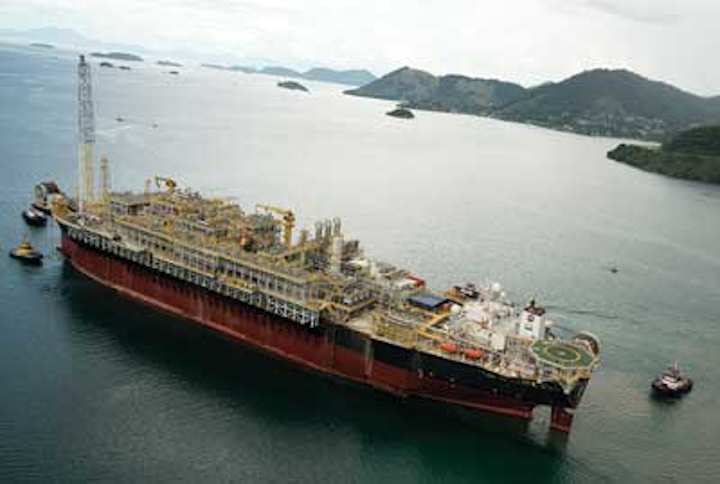 When Petrobras brought the deepwater Sapinhoá oil field on production early in 2013, it put added attention on what already is one of the hottest plays in the world. Furthermore, it brought with it the implementation of the new concept of a buoyancy supported riser system.

Well 1-SPS-55, the first one connected, began to flow at 15,000 b/d of oil. It was restricted to that flow rate until the natural gas processing and reinjection systems were commissioned, at which point the well could flow at 25,000 b/d. The oil is 30º API and Petrobras says it is of high quality.

The gas not used for reinjection will be transported through the Sapinhoá-Lula-Mexilhão gas pipeline to the Monteiro Lobato Gas Treatment Unit in Caraguatatuba, on the coast of São Paulo state.

Ten more wells (five production and five injection) were scheduled to go online, with peak production of 120,000 b/d expected in the first half of 2014.

Total recoverable volume from Sapinhoá field is estimated at 2.1 Bboe.

Looking ahead, Sapinhoá's development plan calls for a second, FPSO,Cidade de Ilhabela, to go onstream in the second half of 2014 with the capacity to handle 150,000 b/d and 6 MMcm/d (212 MMcf/d).

Petrobras conceived the buoyancy supported riser (BSR) system which deploys submerged buoys at a midwater level below the FPSO. Subsea 7 was appointed to take the concept forward as part of a $1-billion SURF contract.

Each BSR is a relatively flat, rectangular buoy weighing about 2,000 metric tons (2,205 tons), and installed 250 m (820 ft) subsea with eight tethers anchoring it to the seabed. The buoys will support a total of 27, 3.9-km (2.4-mi) long steel catenary risers (SCRs) suspended in parallel vertically to the seafloor, and connected to the FPSO via non-bonded, flexible jumpers.

The BSR system is designed to absorb the dynamics from the FPSO, resulting in minimized dynamic stresses on the SCRs, and making them behave instead like a long, free-spanning pipe, with the main fatigue response arising from any vortex-induced vibration.

The SCRs' dynamic response is low, which made possible use of BuBi mechanically lined pipe. This is the first such application installed by reel-lay. It was made possible through a joint development program by Subsea 7 and stainless steel manufacturer BUTTING.

Also integral to the BSR system is Subsea 7's Angular Connection Module (ACM) that connects the flexible jumpers to the pre-installed buoys.

Because of the large quantity of risers, the buoys can take up different positions which results in a range of angles. The ACM allows connections to be made at misaligned angles of up to 15°, said Subsea 7.

In January 2010, the Sapinhoá consortium agreed with the Schahin/Modec consortium to lease and operate an FPSO on the Sapinhoá oil field for 20 years. The VLCCRadiant Jewel was converted into FPSO Cidade de Sao Paulo. While COSCO converted the hull at its China shipyard, BrasFELS did all the module installation, assembly, and integration starting in 2012.

Petrobras carried out further tests to determine the size of the field. In December 2010, it began a five-month extended well test at the field using the discovery well. In March 2011, however, Petrobras halted the EWT due to a rupture in the riser connecting the well to the production platform.

Keppel FELS won the contract to fabricate the topsides of the FPSO in February 2011. In April 2011, Subsea 7 was awarded the contract for supplying the riser systems.

Petrobras awarded an engineering, procurement, construction, and installation contract to Saipem in May 2011 for gas export pipelines and related infrastructure.

In October 2011, Dresser-Rand was awarded a $700-million contract by TUPI, a Petrobras operating company, to supply compression equipment for eight FPSOs including the two in Sapinhoá.