Construction of the CLOV FPSO recently surpassed a key milestone when the topsides was mated to the vessel hull at the Daewoo Shipbuilding & Marine Engineering (DSME) shipyard in Geoje, South Korea, in late October. 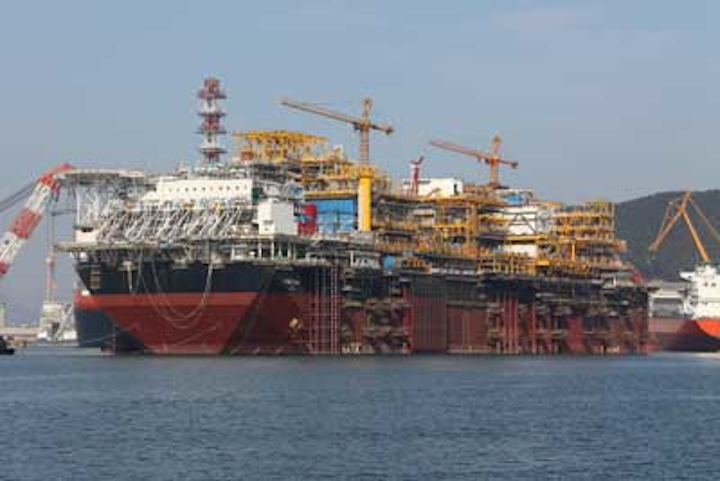 With topsides installed, FPSO expected to be ready this April

Construction of the CLOV FPSO recently surpassed a key milestone when the topsides was mated to the vessel hull at the Daewoo Shipbuilding & Marine Engineering (DSME) shipyard in Geoje, South Korea, in late October. With a total cost of $1.8 billion, the design and construction work on the CLOV FPSO began in June 2011 and is progressing toward an April 2013 completion date.

The CLOV project involves the integrated development of a four-field cluster on the northwest sector of Angola's offshore block 17, in water depths ranging from 1,100 to 1,400 m (3,609 to 4,593 ft). Consisting of the oil fields Cravo, Lirio, Orquidea and Violeta, CLOV is an acronym of the four fields.

Total's Angolan subsidiary, Total E&P Angola, is the operator of Angolan block 17 with a 40% interest. Other partners include Statoil, Esso Exploration Angola, and BP Exploration Angola. This project is the fourth development pole in Angola's deep offshore block 17, after Girassol, Dalia, and Pazflor.

Located approximately 140 km (87 mi) from Luanda and 40 km (25 mi) northwest of Dalia, the CLOV development will lead to the four fields coming onstream in mid-2014. The proved and probable reserves are estimated at approximately 500 MMbbl of oil.

The project's development plan calls for the use of technologies that have already proven effective on Girassol, Dalia, and Pazflor. The FPSO is designed to receive, process, and store oil or natural gas, and can be maneuvered to serve different locations. A total of 34 subsea wells will be tied back to the CLOV FPSO, which will have a processing capacity of 160,000 b/d of oil and 230 MMcf/d of natural gas, with a 1.9-MMbbl oil storage capacity.

A key to CLOV's early success has been the selection of and execution by the project's contractors, engineers, and suppliers. As offshore field development is increasingly turning to remote and harsh environments, the conditions in which offshore structures are exposed have become more challenging. This underscores the importance of engineering design, construction, and materials selection.

Two years ago, Total awarded Korea's DSME a $1.8-billion engineering, procurement, installation, and construction contract for the FPSO. KBR was selected to perform the topsides detailed design, in collaboration with DSME.

DSME also relied on its 34-year relationship with POSCO, the Korean steel company that provided the steel for the topsides and hull. With the CLOV project, POSCO became the first steel manufacturer to provide the entire supply of thick plate steel for a major offshore facility, from a single mill. This included some 88,000 tons of steel plate. The scale of the CLOV floating facility is huge, involving construction of what will be one of the world's largest FPSOs. The vessel is 305 m (1,000 ft) long, 61 m (200 ft) wide, and weighs 110,000 tons. After the Pazflor FPSO, CLOV is reputed to be the second-largest FPSO in the world.

Steel selection was a key component of the FPSO design and construction, and the need to procure high-strength, quality steel in turn underscored the importance of selecting the correct steel manufacturer. POSCO was already registered with Total as a supplier capable of meeting the strict requirements for offshore structures, one that could quickly respond to changes in plans and requirements, as needed.

Another key advantage was geographic proximity - POSCO's Pohang and Gwangyang facilities are located near DSME's shipyard in Geoje, South Korea, which also facilitated the timely delivery of steel materials. For all these reasons, DSME negotiated that POSCO supply 100% of all steel plate needed for the project.

POSCO was also able to meet technical requirements that only a few mills in the world are capable of meeting. Out of the total 88,000 tons of steel supplied, approximately 20,000 tons were Z quality (low-sulphur steel with tested level of ductility through the thickness direction) API 2W-60Z for the topsides and EH36Z-TM steel for the hull. Besides the POSCO facilities in Korea, only a few of the world's steel mills are able to produce and supply these Z quality steels. In the construction of offshore structures, these Z quality steels are often used in joints that connect the hull and topsides. These high-quality steels are often specified for critical applications, since they must endure high levels of stress.

Another challenge was the short construction timeframe called for on the CLOV project. This in turn meant there was less time to deliver the materials required, including fabricated steel plates. For most offshore facility construction projects, suppliers typically have one year to complete their order. Often, the extended time period is needed to allow for changes in design and specification that inevitably arise over the life of such projects. Here again, POSCO's ability to respond quickly proved vital.

POSCO was able to develop and incorporate offshore structure steel production technology and lessons learned from its involvement in the Pazflor FPSO project, again with Total and DSME. As the first company in the steel industry to implement the Process Innovation business management software system (in 1999), POSCO has been able to successfully manage the total process through this established IT system, receiving orders and delivering supplies quickly in response to client requests. Based upon this technical skill, POSCO was able to respond appropriately and in a timely manner during the CLOV FPSO construction process, when design changes and sudden requests were made. Even with design changes and sudden requests, the Korean steel supplier was able to provide its deliverables in approximately 10 months, from January to October 2011.

Once the final stages of work on the FPSO are completed this spring, the vessel will be prepared to sail away in May to its designated location in Angola's offshore block 17. There, it will be moored and stationed in preparation for a mid-2014 commissioning. The CLOV FPSO is expected to have a 20-year life cycle.