Shell has chosen the Cameron Modular Subsea and Integrated Completion (MOSAIC) systems for its Malampaya gas project in the Philippines. 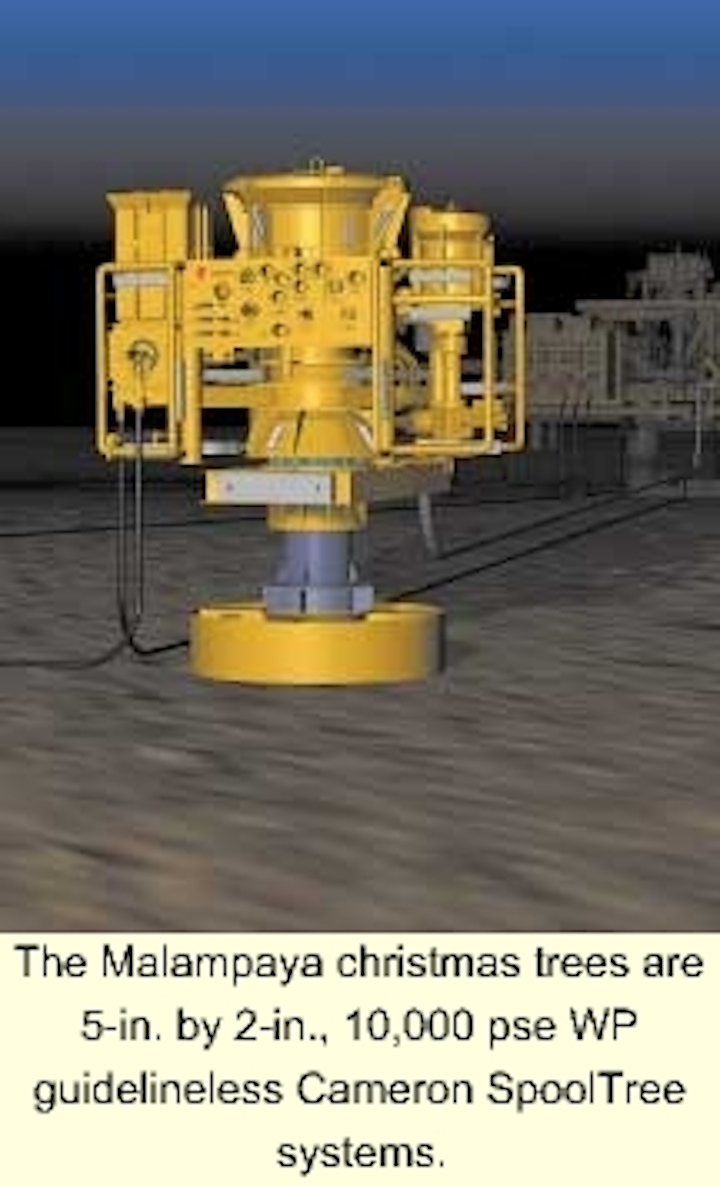 Shell has chosen the Cameron Modular Subsea and Integrated Completion (MOSAIC) systems for its Malampaya gas project in the Philippines. The Malampaya field is located in Block SC38 of the South China Sea in 2,461 to 3,773 ft water depth. The subsea production system is located at a water depth of 2,690 ft.

The production manifold on Malampaya is retrievable and can connect up to 10 producing wells, three control umbilicals, and three flowlines. It integrates two production headers and a pigging loop. The Malampaya production manifold is supported with a three-pile foundation and includes a fixed support structure and retrievable manifold. The manifold is configured with two, 14-in. ID headers and a pigging loop. Each header includes an ROV-operated 16-in., 2,500 lb ANSI ball valve. A hydraulically actuated ball valve is positioned on the pigging loop to isolate the two headers. Ten modular valve blocks with integral jumper connection hubs are positioned five on each side of the manifold.

Each block incorporates hydraulically actuated 5-in., 5,000 psi WP Cameron FLS Gate Valves and McPac clamp connection hubs. The hub faces on the well jumpers provide connection points for the 5-in. production bore and two additional one-inch bores (one for methanol injection, the other for annulus access).

The Malampaya christmas trees are 5-in. by 2-in., 10,000 psi WP guidelineless Cameron SpoolTree systems. The tree spool body is central to the tree assembly. It acts as a tubing spool during completion and as a tree block manifold as the tubing hanger is landed. The spool incorporates 5-in., 10,000 psi WP prod-uction valves (master, wing, choke isolation) and 2-in., 5,000 psi WP annulus valves (master, workover, crossover). Both production and annulus valves are Cameron FLS Gate Valves with Cameron Compact Modular (CM) Actuators. All CM actuators include ROV override capabilities.

The 3/4-in. 10,000 psi WP gate valve provides methanol injection control. The SpoolTree system also integrates a 4-1/16-in., 10,000 psi WP retrievable insert choke to regulate production flow. The choke incorporates a fixed body and a unitized plug and cage trim cartridge and actuator assembly. This assembly is latched to the body with an internal crown connector. It can be retrieved to the surface, leaving the choke body subsea.

All the jumper connections to the wells, the pipeline end modules, and the umbilical termination unit are made with the Cameron McPactrademark Flowline Connection System. This is a compact, horizontal clamp-type connection system, which can be used for everything from large bore pipelines to small flowlines and umbilicals.

The system uses the hydraulically powered McPac Hub connection tool to mate the seal plate to the hubs which are mounted on the trees, manifold, and pipeline end structure. The tool is also used to pressure test the metal-to-metal seals. An ROV powers and operates the tool. The tool is retrieved for use on the next connection, leaving only the clamp and seal plate subsea.

The subsea system is controlled with Cameron's CAMTROL Advanced Multiplexed Hydraulic Control System and is designed to control and monitor up to ten gas production trees and the manifold. The Subsea Control Modules (SCMs) feature dual redundant electronics and hydraulic supplies, and use Cameron HydraQuadtrademark couplers for hydraulic connections. The SCMs are identical and are designed around standard interfaces. They control hydraulic and associated functions on the trees and manifolds and acquire data for transmission to the platform. The modules are pressure-compensated. The SCMs are light weight, compact, and have been specifically designed for deepwater applications.

Pipelay vessel can spool out or J-lay

Hyundai shipyard in South Korea is constructing the new pipelay vessel Deep Blue for Coflexip Stena Offshore. One of the key components to this ship will be the Huisman-Itrec pipelay system. When the vessel is completed, it will be able to lay pipe using one of two methods. The primary method will be to unwind the pipe from a reel. The second method is to J-lay the pipe, welding 48-m sections of pipe together. J-lay is a popular choice for installing steel catenary risers connecting floating facilities to pipelines on the seabed.

The system Huisman has designed, and is constructing, will feature two 275-ton tensioners and a 300-ton traction winch. To ensure the reeled pipe is not over-tensioned or under-tensioned during installation, the Huisman system has a top module that moves independent of the base, carrying a tension of 150 tons. This ensures the difference in speed between the reels of the system and the tensioners is absorbed without over or under loading the pipe.

To aid the vessel during transit, the main ramp can be lowered from its working angle of 90 degrees to a seafastening angle of 32 degrees. This will allow the ship to pass under low bridges. The complete pipeline ramp will be erected on the quayside at Huisman-Itrec and tested before being installed on the Deep Blue in a single lift.

Production on Roncador began last May with five wells. Production levels will progressively increase until all 21 wells are completed, sometime in 2003. CSO's vessel, Sunrise 2000, which has been under long-term charter to Petrobras since March 1995, will perform the offshore installation in three campaigns which will take place over a 24-month period starting in the second quarter of this year.

The vessel upgrade was performed in 1999 in Brazil, and allows the vessel to perform pipe installations in 2,000 meters water depth. CSO said this contract will make full use of the vessel's enhanced capabilities.