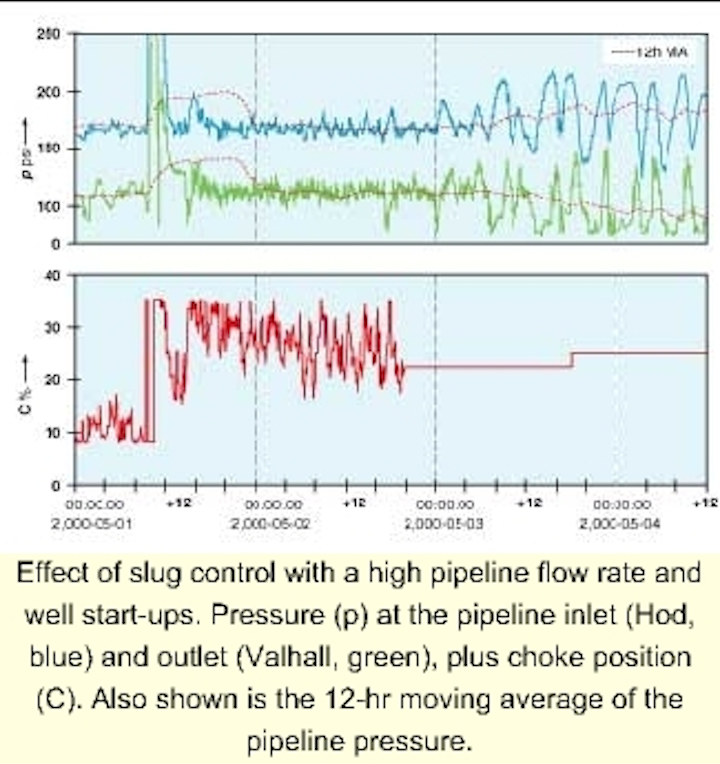 One of the major challenges in operating offshore facilities is the control of disturbances in the feed to the separ-ation process. Specifically, that means smoothing or avoidance of flow variation at the outlet of the multiphase pipelines connecting wells and remote installations to the processing unit.

A common form of flow variation is slug flow, whereby the liquid flows intermittently along the pipes in a concentrated mass or slug. The slug flow's unstable behavior in multiphase lines impacts negatively on the offshore production facilities. Severe slugging can even cause platform trips and plant shutdown. More frequently, the large and rapid variation in flow induces unwanted flaring and also reduces the operating capacity of the separation and compression units.

Flow reduction is an upshot of the need for larger operating margins, both for separation (to meet product specifications) and compression (to insure safe operation with minimum flaring). Backing off from the plant's optimal operating point in this manner limits its throughput.

Typical approaches to this problem include installing slug-catchers onshore or increasing the size of the first-stage separators to supply the required buffer capacity. Other strategies include adapting the separators to receive the slugs - a process known as "feed-forward control" - or using the pipeline choke to suppress the influence of slugs on the separator unit.

However, none of these solutions were practical for BP's Hod-Valhall site in the Norwegian North Sea, partly because design changes to the Valhall platform were not an option. A fourth approach was therefore devised which involved removing the slug flow regime through active feedback control, thereby preventing the slug from entering the production process at the platform.

At Hod, an unmanned, remotely controlled wellhead installation is connected to the main production platform on Valhall via a 12-in. diameter, 13 km long multiphase pipeline. Gas, oil, and water produced at Hod are merged with oil from the Valhall wells following transportation through this line. The combined wellstream then enters the Valhall separation unit, comprising two first-stage and two-second stage separators in parallel.

Monitoring throughput in the pipeline are pressure and temperature transmitters at Hod and a pressure transmitter upstream of the pipeline choke at Valhall. Gas and liquid flows from the Hod wells are measured separately at the outlet of a test separator before the wellstream enters the pipeline to Valhall.

Even though the Hod wells produce less than 5% of volumes generated by the Valhall wells, the slugs they generate cause considerable difficulties, including disturbance in the separator train. This leads to poor separation and variable water quality at the separator water outlets - in turn creating problems in the downstream water treatment system and risking violation of environmental restrictions.

The slugs also induce large and rapidly varying compressor loads, resulting in compressor operating inefficiencies and also limited compression capacity, due to a larger margin being required to handle gas hold-up behind the liquid. This causes spurious product flaring. A further problem is that large pressure variations at the Hod end of the pipeline reduce the lifting capacity, and hence productivity, of the wells.

Hod-Valhall's situation is a case of terrain-induced slug flow. This is a condition initiated by accumulation of liquid, oil, and water in the lower parts of the pipeline or at the riser base. In time, the liquid blocks the passage of the gas, most of which accumulates upstream, causing an increase in pressure. In turn, this leads to movement of the liquid plug, which will subsequently dissolve or be transported to the outlet of the pipeline or riser. As gas and liquids head out of the pipeline, upstream pressure falls and liquid flow from the pipeline is halted. This process is then repeated, resulting in an unstable multiphase flow pattern in which the liquid flow rate varies from nil to a significant value in one cycle.

To address this problem, the Hod-Valhall pipeline was simulated using the multiphase fluid flow simulator OLGA. Data entered included fluid characteristics of the Hod oil, the pipeline profile, diameters and material, and data for the pipeline choke plus its position. The model used is capable of simulating terrain-induced slug flow with approximately the same dynamics as those encountered by the pipeline.

The intuitive approach to slug control is to limit the slug's size in order to restrict its influence on the separator trains and compressors. The designers opted to use ABB's new SlugCon controller, designed to stabilize the flow, thereby avoiding formation of slugs. The system's software includes features for slug control and others:

At Hod-Valhall, the SlugCon is configured to take pressure measurements at the pipeline's inlet and outlet and adjust the pipeline choke valve accordingly. If flow measurements are available, these are also input for feed-forward control of the nominal operating point and tuning parameters of the controller.

The prototype of the slug controller was tested twice in 1999 and has been operating at Hod-Valhall since end-January 2000. Hod's wells are operated cyclically, since the well flow rate decreases over time. When production from a well has reached a lower limit, the well is put on hold. The operating time and the hold time differ from well to well - some wells only remain in operation for a couple of days before being put on hold.

The varying flow rates and cyclic operation of the Hod platform wells make it difficult to determine conclusively the extent to which the slug controller influences the wells (whether they produce more, less, or similar amounts to output prior to introduction of the SlugCon). Recent experience indicates that the wells can be kept operating longer, which increases production, particularly in the case of well H8.

Other benefits that the controller has brought to the Valhall platform include:

Given the "stable" inlet and outlet pipeline pressure, and also the insights provided by the multiphase flow simulation, it appears that the slug controller improves greatly multiphase flow stability in the pipeline. The tests with the prototype algorithm also suggest there is huge potential for applying active feedback control to other multiphase fluid flow processes.