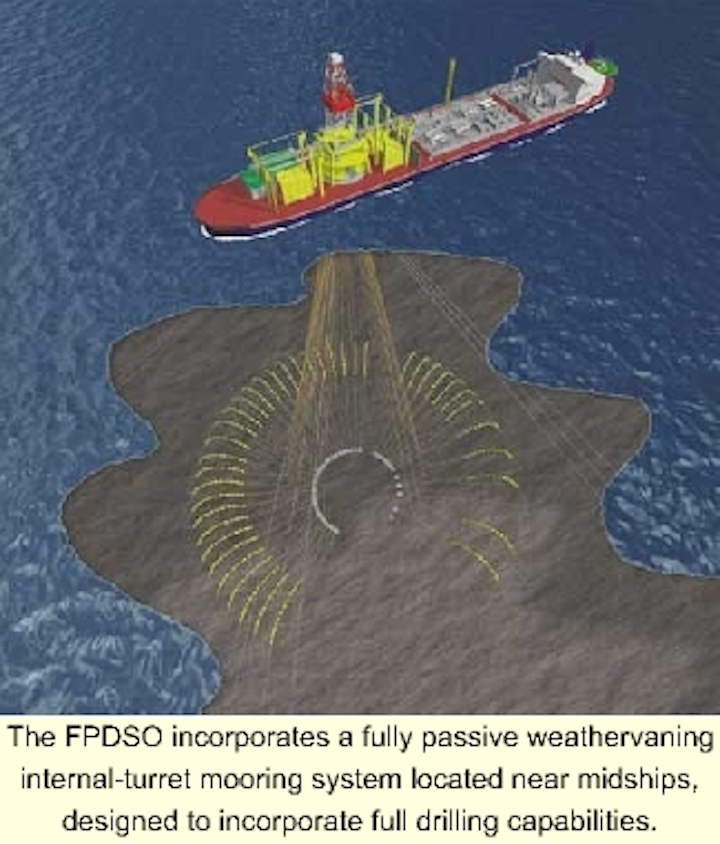 Drillships are now widely used in many parts of the world. They have excellent performance characteristics for most regions and are very competitive because of the high degree of self-supporting ability (storage capacity or payload). In Brazil, more than 200 wells have been drilled from DP drillships.

Floating production, storage, and offloading (FPSO) vessels are used worldwide and are operating in benign as well as in harsh environments of the Norwegian Sea and the West of Shetlands. An important feature of the FPSO is the oil storage capacity it offers.

Experience has shown that large storage capacity improves the regularity of the total production system (including offloading) and now is a "driver" for sizing. In other words, the topsides will not require all the available deck space, thus offering space for other duties (drilling) that is virtually free of charge. Hence, the merits of drilling from a large hull can be obtained at a moderate cost contribution from the "carrier" - the FPSO.

The incentive for drilling onboard the FPSO has become more apparent as exploration activities move into deeper and more remote areas. The main reason is the low number of suitable mbile offshore drilling units (MODUs). Several rig newbuilds are underway, but the new rigs will hardly compensate for the increase in planned exploration and development in deepwater. As a consequence, rig rates have reached record levels. In addition, development drilling and well maintenance operations are a major cost contributor to deepwater field development. Even light well service operations in these water depths are dependent on similar units, as the industry so far has not invested to find reliable methods and vessels for these deepwater operations.

A simple cost comparison of total capital and operating costs can be easily demonstrated. Under certain conditions, incorporating workover or drilling equipment onboard the FPSO will provide a substantial decrease in the breakeven oil price of a field development. Experience has also shown that availability of a rig for well workover often leads to more frequent use and consequently results in added recoverables, an effect too often neglected during concept comparison. Such conditions would typically imply:

These conditions are quite common when looking at the acreage being developed in many parts of the world. Typically one might find this situation in Brazil, Norwegian Sea, West of Shetlands, and other areas. Combining these concepts results in the development of a floating production, drilling, storage, and offloading (FPDSO) unit, jointly developed by Single Buoy Moorings Inc., Kværner Oil and Gas, and Gusto Engineering. The unit has been designed as a stand-alone, having the capability to carry out full field development and operations on subsea trees in deepwater fields off Brazil, with specific functional requirements provided by Petrobras.

All of the advantages of an FPSO are incorporated with a fully passive weathervaning internal-turret mooring system located near midships. This midship turret has been designed to incorporate full drilling capabilities. Thrusters, which offer heading control, provide the same high drilling availability achieved by drillships.

The FPSO unit consists of a free weathervaning mono-hull vessel, passively moored to the seabed by a number of anchor lines connected to a turret-type mooring system inside the vessel. The vessel could be either a newbuild vessel or a converted tanker.

Live crude is received via subsea lines and a flexible riser system from subsea wells drilled in fields near the FPSO by a separate drilling unit. On the turret manifold deck, the oil streams are collected, and the crude is received on board via product swivels located on top of the manifold room. Thereafter, the crude passes through the process facilities for separating oil, water, and gas, before flowing to storage.

Produced water is treated and dumped overboard. Produced gas is treated and disposed of. Some of the gas will fire the gas turbine generators, while the remainder is re-injected or exported. The oil cargo is periodically discharged into tandem moored shuttle tankers. On board the FPSO, all functions are monitored and controlled from a permanently manned control room located in the accommodation block.

The floating production, well intervention, storage, and offloading (FPWSO) unit is based on an FPSO with well intervention equipment. The unit provides for production while wells within reach of the unit can be maintained. The unit facility is expected to be an attractive solution for smaller, remote deepwater fields with high well maintenance requirements.

The workover arrangement is based on a novel solution for workover through the center of the geostationary large diameter turret unit. Placing the workover support structure over and around the turret created a traditional drilling vessel operation without affecting the turret loading. The key features of the FPWSO for field development are:

Layout of the well intervention involves:

Construction of the well intervention FPSO involves a combination of the FPSO and well intervention equipment, easily fabricated by most shipyards. Offshore installation is similar to that of FPSOs, provided that all wells are pre-drilled from a MODU by the time of the offshore installation. In terms of operations and maintenance, the FPWSO stationkeeping system is passive and does not require thruster assistance. The stand-alone FPWSO system consists of the following components, which have been integrated into a single unit:

The floating production, drilling, storage, and offloading (FPDSO) unit is based on an FPSO with full well drilling, completion, and well workover equipment. The unit provides for production while drilling where wells within reach of the unit will be drilled and maintained directly from the FPDSO, and the balance from a separate MODU. The FPDSO facility is expected to be an attractive solution for larger remote deepwater fields with high drilling and well maintenance requirements.

The FPDSO was specifically developed with both drilling and production requirements fully integrated into the vessel without compromising or sacrificing the safety, availability, and operability of either function. The design focused on achieving operational flexibility, low technical risk, cost, using proven designs, and standard industry equipment. For field development, the unit incorporates:

The well casing program is expected to consist of the following design for production (and any subsequent gas injection) wells:

The vessel and mooring system is designed for a service life of 20 years. Also, the 100-year return storm conditions for the Campos Basin region are assumed for the design environmental conditions of the vessel.

The subsea wells are arranged in a circular horseshoe configuration with a radius of approximately 50-100 meters from the center axis of the drill/workover string with the FPDSO located in its nominal position. The distance between the wells will be sufficient for BOP and tree installation and tie-in of risers. Also, by adjusting the mooring chain, the moonpool can still be relocated above any well, including the drift of the drilling riser due to the one-year current.