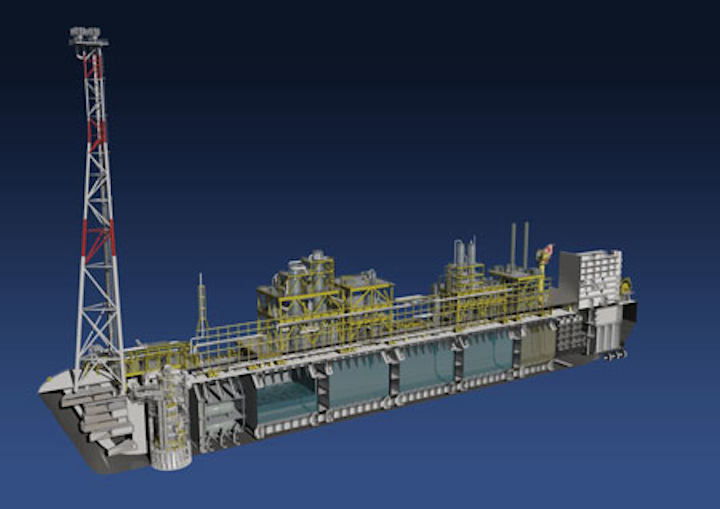 Analysis suggests that limits are commercial rather than technical

The first floating liquefied natural gas (FLNG) projects are nearing completion and will soon enter operation. A review of the information available in the public domain on these projects has been undertaken as part of an effort to identify the underlying trends. From this data, correlations were developed for estimating the size and weight of an FLNG vessel.

A high-level model was developed from these correlations, and studies were performed to provide insights into the key weight drivers for the FLNG vessel topsides and hull. Also included in this analysis were a breakdown of FLNG weight; FLNG economies of scale; and the limits on ultimate FLNG capacity.

The FLNG hull has to provide a seaworthy and stable platform not only for production and product offloading, but also for the safe accommodation of the crew in a remote and possibly hostile environment. It also has to accommodate the required product storage and provide a flat deck area to support the topsides process, utility, product offloading, and support facilities.

Open ocean, ship-shaped floating facilities have limits on the allowable hull aspect ratios (i.e., ratio of length to breadth [L/B] and breadth to depth [B/D]) for stability reasons. With the current FLNG projects and concepts, the aspect ratios are similar to LNG carriers.

The required LNG storage capacity is a primary function of the parcel size of LNG, plus typically two to five days production as contingency against unforeseen events that could delay offloading. The parcel size is equal to the capacity of the largest LNG carrier to be loaded, since these vessels cannot accept partial loads due to issues with sloshing.

The condensate storage capacity and LPG storage capacity, if produced as a separate product, would be less than the LNG storage, since the parcel sizes are considerably less. This is due not only to the availability of oil tankers and LPG carriers of smaller capacity than LNG carriers, but also the ability of these ships to accept partial loads. Furthermore, the daily production rates of LPG and condensate, and so contingency volumes, are considerably less than for LNG. It should also be noted that as the condensate is contained by the steelwork of the hull rather than in specialized cryogenic storage tanks, additional contingency can be provided at minimal cost if there is “spare” space in the hull. 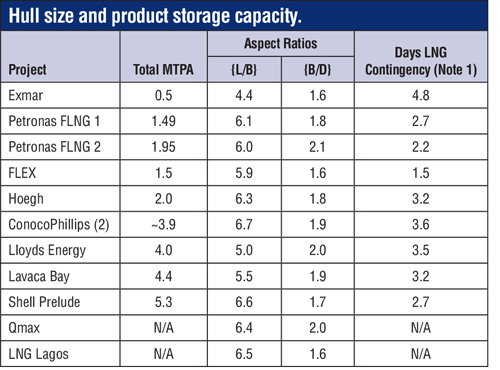 The remainder of the hull would be occupied by the insulation around the cryogenic tanks and the void between the inner and outer hulls. The analysis also took into account the required machinery rooms, workshops, storage tanks (for production chemicals and solvents, refrigerant make-up, diesel fuel, and water); and, for offshore FLNG, an internal turret.

The results indicated that for both data sets, the required topsides area has a fixed component and a component that is dependent on production capacity. Whereas both data sets have approximately the same gradient, the intercepts are significantly different. This can be explained as follows:

• Deck space required for the topsides processing systems would be expected to be proportional to production capacity; and this relationship is similar for both offshore and jetty-moored FLNG

• For offshore, completely standalone FLNG projects, the deck space taken up by those elements that are not directly related to throughput – including the turret, product offloading equipment, large living quarters and lifesaving equipment – would be significantly greater than for jetty-moored concepts.

The required hull volume is the greater of the two requirements, and when the storage capacity and topsides area requirements result in the same sized hull, the design is said to be “balanced.”

Finally, in this analysis total hydrocarbon production capacity was employed. This is because it is a better metric than LNG capacity for comparing FLNG concepts that process lean gas containing virtually no NGLs with those processing more conventional natural gas. 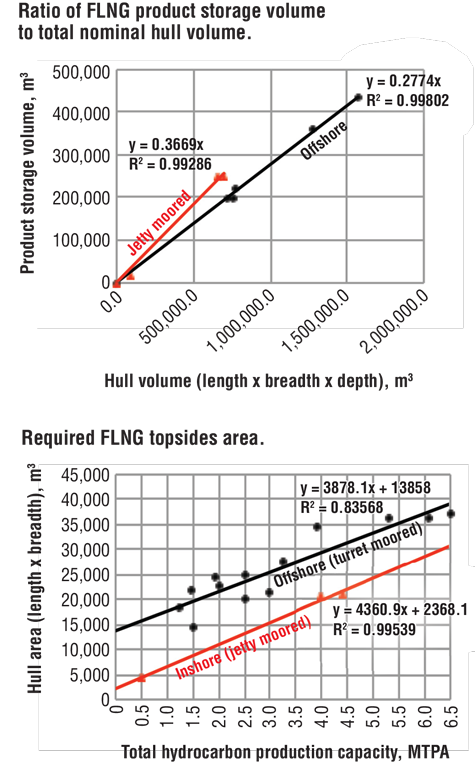 The relationship between the topsides and hull weights reflects the fact that the topsides weight is comprised of a variable component, including the process units and some utilities, that is proportional to production capacity; and a fixed component that is not – including product offloading, safety equipment, some utilities, material handling, and crew support facilities.

The actual FLNG weight is the greater of that based on product storage capacity and topsides area requirements. When the two result in the same-sized hull, the design is said to be “balanced.” The exact capacity at which this occurs depends on the metocean conditions (which influence the choice of mooring type and the L/B and B/D ratios), the topsides process facilities required, and the storage volume. For an offshore FLNG, the “balanced” design corresponds to a total hydrocarbon production capacity of approximately 3.5 Mtpa, and for a jetty-moored FLNG about 6.5 Mtpa. Furthermore, for the concepts currently proposed, the hulls are either close to a “balanced” design or topsides driven. 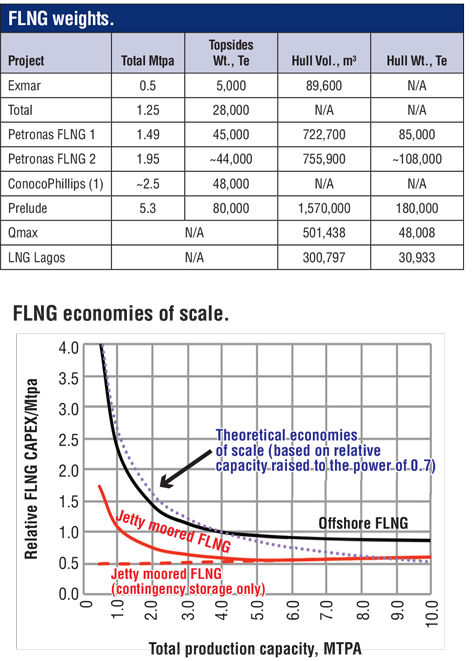 • Offshore FLNG is significantly heavier and more expensive that jetty-moored FLNG due to the additional facilities required for standalone operation in a remote, potentially hostile, environment

• For offshore FLNG and jetty-moored FLNG, storage in hull economies of scale apply strongly at small capacities; but this largely disappears at higher production capacities when the hull design is topsides-area driven

• For jetty-moored FLNG where there is only contingency storage in the hull, there are no economies of scale for the FLNG itself. Although this analysis did not include the cost of storage in a converted LNG carrier moored alongside, this could potentially be cost effective even at small capacities

• For small-scale FLNG where the hull size is driven by storage volume, capex would be minimized by specifying the minimum feasible storage volume

• For large-scale FLNG where the hull size is driven by topsides area, capex would be minimized by selecting the longest, thinnest feasible hull, since this achieves the required B/D ratio with the smallest hull depth and so volume.

The ultimate capacity of an FLNG facility will be dictated by the size of the dry docks available for construction of the hull. Furthermore, there are only a limited number of shipyards available with large dry docks and the capabilities to build such hulls.

The largest dry dock in the world measures 990 m x 100 m x 14.5 m (3,248 ft x 328 ft x 47.6 ft). Based on these dimensions, the ultimate theoretical FLNG capacity would be approximately 13 Mtpa for offshore FLNG and 14 Mtpa for jetty-moored FLNG, based on the required topsides areas and the allowable hull aspect ratios. There are another four dry docks that could theoretically accommodate FLNG more than 10 Mtpa.

However, there may be other practical limits as well. For example, the required breadth to depth ratio may mean the height of the hull above the dock side is so great that it imposes limits on the weight of modules that can be lifted. Furthermore, as there is only one yard in the world that would be able to build a hull this large, the ultimate limit may be commercial rather than technical.

From the analysis of the information available in the public domain, it has been possible to develop correlations for the size, weight, and relative capex of FLNG. For example, at small LNG capacities, FLNG hull size is driven by the product storage requirement, which is driven in turn by the LNG parcel size. Whereas at larger capacities, hull size is driven by the topsides area required. Where the two requirements are equal, the hull design is said to be “balanced” and the ratio of hull weight to topsides weight is at a minimum.

At LNG capacities less than that required for a “balanced” hull design, the economies of scale are strong; whereas at large capacities, they largely disappear. However for jetty-moored FLNG where there is only contingency storage in the hull, there are no economies of scale.

Offshore FLNG is significantly heavier and more expensive than jetty-moored FLNG due to the additional facilities required for standalone operation in a remote, potentially hostile environment. Consequently, small-scale offshore FLNG does not look attractive since there is insufficient production capacity to offset the “fixed” costs. However, small-scale, jetty-moored FLNG does look attractive where low-cost storage, such as a converted LNG carrier, is available and only contingency storage has to be provided in the hull.

The ultimate FLNG capacity would be dictated by the size of the dry docks available for construction of the hull. Based on the largest currently available this would indicate a theoretical ultimate total production capacity (LNG, LPG, and condensate) of approximately 13 Mtpa and 14 Mtpa for offshore and jetty-moored FLNG, respectively. •