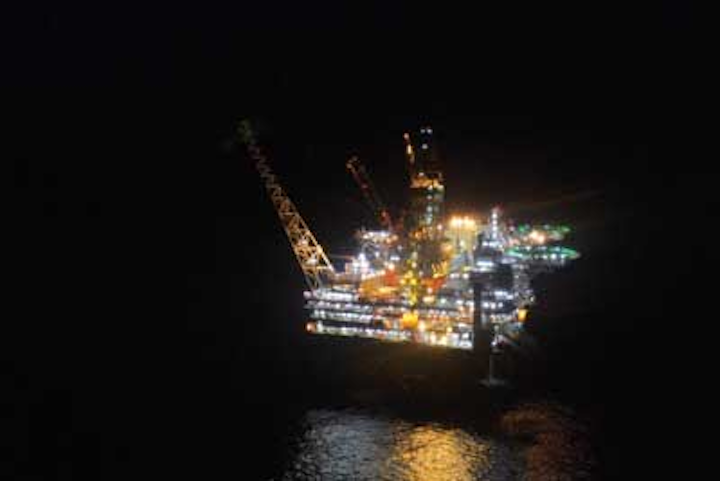 Discovered in 1974, Gudrun is a high-temperature/high-pressure field that remained undeveloped for decades because new drilling technology was required to exploit it. Once the needed technology was born, Statoil hit the drawing board to engineer a fully constructed platform standing independently in the North sea. The operator expects to recover 184 MMboe from the field during its lifetime.

The field leverages existing infrastructures, with an export connection to the Sleipner A platform. Its expected peak production is about 90,000 boe/d. Statoil submitted Gudrun's plan for development and operation (PDO) in 2010 and received approval in June 2011. At the time of submission, Gudrun was Statoil's only mega-project (investments in excess of $1.7 billion).

"We delivered the Gudrun field on time and below the cost estimate in the PDO. Choosing a global strategy for Gudrun contributed to reducing the costs," said Margareth Ovrum, head of the Technology, Projects and Drilling business area in Statoil.

The field holds an estimated 26 bcm (918 bcf) of gas and 30 MMbbl of condensate. It was developed with an integrated processing platform with wellhead facilities and separation of gas, liquids, and water. The platform produces from seven production wells, including Gudrun Ost, a discovery made after the plan for development and operation of the Gudrun field was submitted. Its topsides has slots for 16, making it possible to incorporate new discoveries in the future, which is very likely given Statoil's penchant for fast-tracking developments using existing infrastructure.

Situated in production license P 025, the Gudrun field is located about 34 mi (55 km) north of the Sleipner installations in a water depth of 357 ft (109 m). Oil and gas is sent to the Sleipner platform, where it is processed before the oil is sent on to Kårstø and the gas to Europe, all through existing pipelines tied in to Sleipner. Sleipner A will also supply power to the Gudrun platform.

"This allowed us to benefit from previous investments made on the Norwegian shelf," Ovrum explained. "The Gudrun concept is a win-win situation. By using existing infrastructure, the Gudrun development costs less and Sleipner gains an extra customer. Gudrun's start-up came at the perfect time."

Modifications were carried out on Sleipner and at Kårstø as part of the Gudrun project.

Gudrun is operated from Statoil's offices at Vestre Svanholmen in Sandnes, Norway, and is the first new field Statoil operates from the Stavanger region since Sleipner in 1993. Statoil has a 46.8% stake, Marathon Oil Corp. holds 28.2% and GDF Suez SA holds 25%.