The Cheleken block in the eastern section of the Caspian Sea off Turkmenistan, has been producing commercially since 1972. In November 1999, Dragon Oil was awarded a production-sharing agreement for redevelopment of the block. The concession comprises two main fields, known as Dzheitune (or Lam) and Dzhygalybeg (or Zhdanov), in water depths ranging from 8-42 m (26-138 ft). 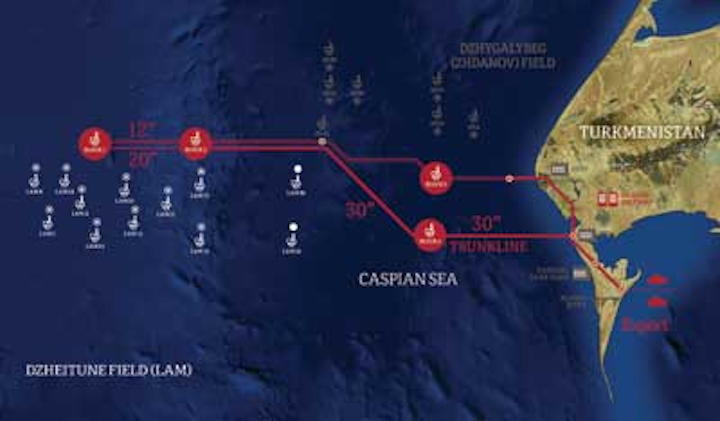 The Cheleken block, in the eastern section of the Caspian Sea off Turkmenistan, has been producing commercially since 1972. In November 1999,Dragon Oil was awarded a production-sharing agreement (PSA) for redevelopment of the block, which became effective in May 2000. The concession comprises two main fields, known as Dzheitune (or Lam) and Dzhygalybeg (or Zhdanov), between 10 and 30 km (6.2 and 18.6 mi) offshore from the Cheleken peninsular, in water depths ranging from 8-42 m (26-138 ft).

The producing reservoirs are highly complex not only in terms of the reservoir nature but also for their fluid distribution. The Lam and Zhdanov fields are a series of laminated stacked reservoir sandstones deposited within a fluvio-deltaic to shallow marine environment, in subsurface depths ranging from 1,500-4,500 m (4,921-14,764 ft). Oil and gas condensate zones are present along the stratigraphic column and in many cases these are difficult to differentiate and to isolate.

As part of the production growth strategy, Dragon Oil implemented two pilot projects for artificial lift, using jet pumps and water injection, with the intention of proving their technical viability considering all the issues above.

The Cheleken fields are predominantly under depletion drive mechanism and the reservoir pressure is gradually declining. Consequently, production from the wells is also in steady decline and many wells cease to flow naturally, necessitating artificial lifting. With time, more and more wells will need measures to continue producing oil. There are many proven artificial lift (AL) systems available in the industry, each of which has its pros and cons and specific applications.

Dragon Oil has initiated a pilot program to evaluate a few of these techniques in order to select the optimum system for the Lam and Zhdanov fields. This assessment is especially important given the fields' offshore location and issues such as sand and wax production from the reservoirs. Currently the focus is on jet pumps (JPs), electrical submersible pumps (ESPs) and gas lift (GL) although other solutions such as plunger lift and positive cavity pumps (PCPs) may eventually come under consideration.

An artificial lift system was first introduced in the Lam field via a pilot trial of the jet pumps. Operational benefits from the technology are as follows:

Jet pump lifting is part of the hydraulic-lift class of artificial lifting methods and is designed to achieve momentum transfer between the power fluid and wellbore fluid. The operation principle consists of installing the jet pump in the sliding sleeve door (SSD) profile, comprising a throat/nozzle and a diffuser. A power fluid (water in this case) is pumped into the well annulus. This power fluid passes through the throat/nozzle and diffuser where high velocities are induced, creating a vacuum (low pressure), leading to a reservoir pressure drawdown. At this point, reservoir fluids are allowed to enter and are mixed with the power fluid. The combined fluids are then produced through the production tubing up to the surface.

In June 2013, JPs were run in two wells with associated surface equipment, i.e. power unit, vessel cleaning unit, manifolds. The candidate wells had ceased to flow naturally and were shut-in. With the help of the jet pumps, production from the wells was restarted, leading since to a sustained oil production gain of about 1,000 b/d of oil.

The JP surface facilities include the following:

To avoid abrasive damage to the positive displacement pump caused by sand and any other solids, the PU's suction lines are equipped with a two-by-two basket strainer filtration skid. This is in addition to the cyclone liners – should these fail (or during preventive maintenance), the pump will be protected.

Aside from the additional pressure drawdown applied (and the resultant increase in production), the JPs have brought another significant benefit in the form of preventing wax deposition. This has been mitigated by constant injection in the system of a hot power fluid which while passing through the JP heats up the produced fluids by around 10°C. The wellhead temperature in turn increases from 25 to 47°C, or 77-117°F (wax is typically deposited at temperatures in the range 28 to 35°C, or 82-95°F).

Following the successful trial and satisfactory performance of the jet pumps, Dragon Oil plans to equip up to 14 more wells with JPs over the next two years. The company is in the process of acquiring six PUs and other associated equipment, and has ordered a portable PU to test and select JP candidate wells on the West Lam platforms and elsewhere. The JP system may be further expanded if the pilot results are sustained and production from the new group of JP-equipped wells proves equally encouraging.

At the moment, the company is analyzing the economic feasibility of expanding the use of jet pumps across the Lam field.

The Lam and Zhdanov fields show declining production and flowing wellhead pressures, rising gas-to-oil ratios, and a modest water-cut increase in most wells.

Dragon Oil has considered water flooding as a means of providing pressure support and improved reservoir sweep and oil recovery. However, given the uncertainties and risks associated with this expensive secondary recovery technique, particularly in view of reservoir complexities, the company is taking a cautious approach and has therefore selected three reservoir layers (those with the highest in-place volumes and the most depleted) for water flooding.

A pilot water injection scheme started at one of the Lam platforms in June 2013 following the installation of water injection facilities for a single injector well at the platform. The injection rate has averaged about 3,500 b/d of water and cumulative water injection in the first year of injection was close to 1 MMbbl. Response from this pilot has been positive. The reservoir pressure in the pilot area has increased by about 350 psi (24 bar). Injection surveillance results also suggest a good lateral communication of reservoir layers, which is necessary for a water flood to be successful. However, the formation of an oil bank from water injection and the resultant increase in oil production are both expected to take time, owing to significant pressure depletion and the large volumes of fill-up required. Therefore, higher injection volumes may be required to improve the oil recovery. Additional surveillance and reservoir modeling are crucial for assessing the pressure response observed in the nearby wells.

Preparations are under way to expand the water flood to some parts of the field in stages. Water injection pilots should start at two more platforms during 2014-15, and further expansion of water injection should follow at several other platforms over the next two to three years depending on the results of these earlier programs. Up to 13 wells in the Lam field may be converted for water injection to establish a peripheral injection scheme with a total injection rate of 30-35,000 b/d of water. This will require four or five injection skids similar to the one already installed.