FPSO construction is inherently challenging. Such projects require the integration of distinct components: the hull, topsides and modules, plus the subsea mooring and riser systems, which require hook-up to subsea equipment, and commissioning of the vessel in the field. The unique design requirements of the business, the incorporation of new and old equipment, the integration of owner-provided equipment, and the use of multiple contractors provide the ingredients for potential delay. 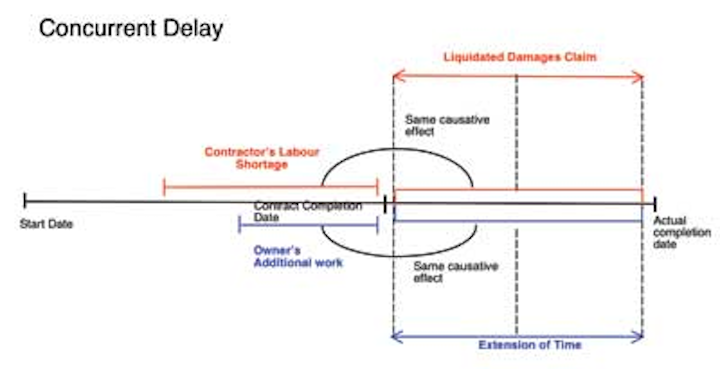 FPSO construction is inherently challenging. Such projects require the integration of distinct components: the hull, topsides and modules, plus the subsea mooring and riser systems, which require hook-up to subsea equipment, and commissioning of the vessel in the field.

The unique design requirements of the business, the incorporation of new and old equipment, the integration of owner provided equipment, and the use of multiple contractors provide the ingredients for potential delay problems. The interdependent nature of various aspects of FPSO construction means that risk allocation of delay events, in particular, the extension of time and liquidated damages regime, needs to be carefully understood, assessed, and applied.

A typical construction contract delineates various delay events according to the risk assumed by the respective parties:

Risk allocation for delay events must start with a proper understanding of extension of time (EOT) clauses. The common perception of EOT clauses is that it is intended to benefit the contractor because it extends the date for completion of the works for delay events, thereby reducing the period from which an owner can seek liquidated damages. Owners, therefore, typically view such clauses with considerable suspicion, and seek to limit its scope and application, with the belief that the fewer opportunities a contractor has to rely on an EOT clause, the greater the owner's chances to claim more liquidated damages. Such a belief is misplaced.

The reality is that EOT clauses operate for the benefit of the owner as well, as such clauses avoid the operation of what is known as the "prevention principle." The prevention principle is not a novel concept, having been established as far back as 1893. In essence, the prevention principle operates to preclude an owner from claiming any liquidated damages if some of the delay is due to its own, employees', or agents' default. In practical terms, this means that when the principle applies, time for completion of the works is set "at large." The contractor is no longer obliged to complete the works by the completion date but instead has to do so within a reasonable time. Flowing from that, the owner can no longer seek to claim liquidated damages from the contractor but, to the extent that the contractor has exceeded a reasonable time to complete the works, the owner has to prove its losses as general damages.

The practical ramifications of this principle can be startling.

Actions by the owner which are perfectly legitimate under a construction contract may still be characterized as prevention if those actions caused delay beyond the contractual completion date. Even when an owner's delay can be easily quantified, for example, late provision of a site to start work, the courts, under English law will not apportion liability for delay. This results in the position that even if the contractor would have been unable to complete on time, in the absence of a delay by the owner, the liquidated damages clause will still cease to apply if the owner is responsible for some of the delay.

Parties can seek to contract out of or modify the application of the prevention principle through the use of EOT clauses, for example, by providing an extension of time mechanism on account of such acts of the owner, that might otherwise amount to acts of prevention. Viewed from such context, an EOT clause takes on a different complexion – it is actually beneficial to the owner in that it preserves the right to liquidated damages in the event of delay attributable to the owner.

This is all the more so in the context of FPSO constructions, where there is a constant interface between the owner and contractor, whether in terms of coordination of the various components, integration of owner provided equipment, involvement of third party contractors employed directly by the owners, and the likelihood of variations that inevitably arise with building a customized piece of equipment for offshore operation. Extension of time clauses have no pro-forma standard in the FPSO market; hence, careful consideration should be given to prevention issues when allocating risks in such projects.

A few key issues regarding risk allocation are described below.

Notification requirements in EOT clauses. Most extension of time clauses provide for a timeframe from which a contractor is to apply for an extension of time. Whether any timeframe stipulated for the notification of an extension of time should operate as a condition precedent to the operation of the clause depends on the wording of the EOT clause. Can a contractor who fails to notify the owner of a Relevant Event or does not do so within the stipulated time, then assert that it has been prevented by the acts of the owner, resulting in the disabling of the liquidated damages sanction?

The weight of the authorities seem to suggest it would inequitable to allow a contractor to be "better off by deliberately failing to comply with a notice condition than by complying with it" and that the contractor should not be able to "rely upon preventing conduct of the other party where it failed to exercise a contractual right which would have negated the effect of that preventing conduct."