In recent years, the UK's offshore oil and gas production has risen with 49 new fields coming onstream since the start of 2012. At the same time, as various large projects move into the development and production phase, the number of unsanctioned but potentially commercial discoveries has decreased. 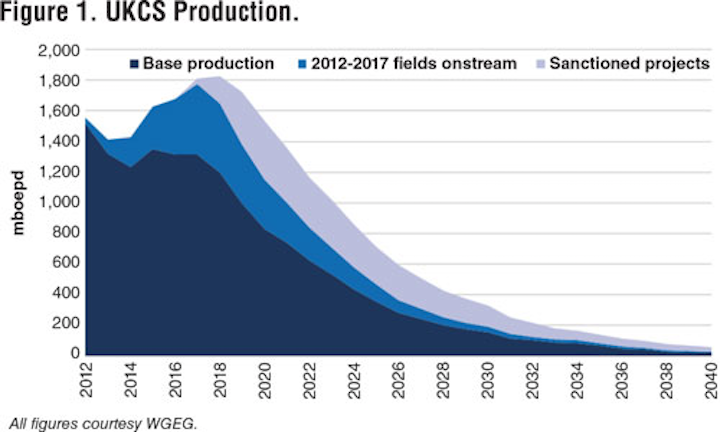 In recent years, the UK’s offshore oil and gas production has risen with 49 new fields coming onstream since the start of 2012. At the same time, as various large projects move into the development and production phase, the number of unsanctioned but potentially commercial discoveries has decreased. 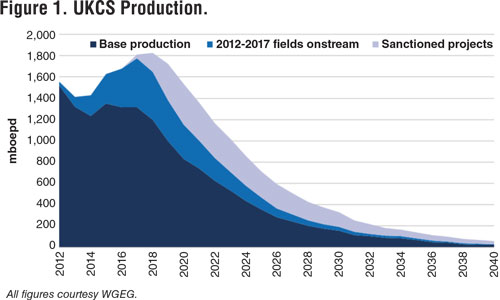 Westwood Global Energy Group (WGEG) estimates there are close to 8.4 Bboe of resources remaining in 491 unsanctioned discoveries across the UK continental shelf (UKCS), but only 30 (just over 1 Bboe in total) appear to be potentially commercial. The majority are progressing toward sanction but there is very little in the development hopper that can slow the production decline. As a result, there is a need for fresh exploration to deliver material volumes if the UK is to replenish its commercial pool of discoveries. Although various large prospects are likely to be drilled this year, many are either high-pressure/high-temperature (HP/HT) or stratigraphic traps, and therefore inherently riskier.

Total UK production1 looks set to increase from around 1.68 MMboe/d in 2016 to just over 1.8 MMboe/d in 2018, continuing the year-on-year increase that started in 2013. Production efficiencies and field redevelopments have played their part but it is the new development projects that have made the greatest contribution. New fields either recently onstream or close to start-up include the heavy-oil projects of Kraken (127 MMbbl) and Mariner (250 MMbbl) in the East Shetland basin; the HP/HT Culzean field (275 MMboe); and large, more conventional developments such as Catcher (around 100 MMboe), Cygnus (932 bcf, or 155 MMboe) and the west of Shetland Quad 204 redevelopment (around 450 MMboe). The proportion of new developments considered technically complex is rising, and this includes heavy oil, HP/HT, deepwater and tight gas projects. WGEG estimates that 37% of all reserves that have come onstream since 2012 or are under development are challenging to deliver.

The production decline will be most noticeable in the UK North Sea, where output is likely to fall by 30% from the current 1.5 MMboe/d to 1 MMboe/d by 2021. In contrast, the west of Shetlands should see an increase from 120,000 boe/d in 2016 to over 300,000 boe/d by 2020, and this region looks set to account for around a quarter of the UK’s total production in the early 2020s, compared to just 8% in 2016. This is due largely to start-ups at fields such as Clair Ridge, Edradour and Glenlivet, and production building from the redeveloped Schiehallion and Loyal fields (Quad 204).

Development of these large-resource fields will lift production in the short term, but WGEG predicts a rapid decline from 2020. While every effort will be made to maximize recovery from existing developments, there will be an increased reliance on tapping the potential of the UK’s already discovered, but yet to be sanctioned, smaller discoveries. And while smaller, near-field tiebacks provide value for operators of the associated infrastructure, they lack the scale and longevity afforded by many of the current large developments.

The 491 undeveloped discoveries with total resources of 8.36 Bboe are dominated by unappraised, single-well small pools that are mostly stranded, and currently sub-commercial. Based on internal modeling, operator and partner opinion and public domain data, WGEG believes only 30 of the discoveries are potentially commercial, amounting to just 12% (around 1,030 MMboe) of the UK’s total discovered but undeveloped resources.

Among the sub-commercial fields, size is the greatest barrier to development in 78% of the cases (40% of total resources), with 261 discoveries holding resources of less than 10 MMboe. In addition, nearly 30 technical discoveries are currently unlicensed, amounting to nearly 1 Bboe of resources. Around 70% (339) of the sub-commercial discoveries were discovered pre-2000 and account for 4.7 Bboe. These will likely remain undeveloped unless there is a drastic change in the economics driven by an increase in price, a fall in costs, or new technology advances.

Of the 30 discoveries (1,030 MMboe) that WGEG views as potentially commercial, 25% are either HP/HT, tight gas or heavy oil and therefore “challenged” at current oil prices, while the remaining 75% are conventional discoveries. The commercial pool contains no deepwater discoveries, with both Hess’s Cambo and Chevron’s Rosebank west of Shetland considered sub-commercial at this point. But with improvements in both technology and the economic outlook, both these and other technical discoveries could move into the commercial category. 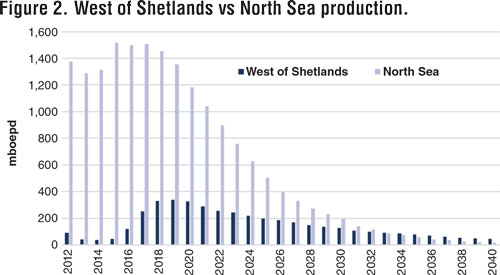 Most of the outstanding commercial discoveries are likely to be sanctioned within the next five years - 20 already have development plans or studies progressing, while the other 10 are considered commercial on the basis of their tieback potential and/or incorporation into already producing assets. Even if all these currently commercial discoveries can be progressed, however, production would not be replaced and it would leave very few potentially commercial finds for development, other than any discovered through exploration in the interim.

There is a substantial reliance on exploration drilling to deliver new, and importantly, material volumes. However, the focus on small, near-field targets means the UK’s average discovery size over the last five years has been just 22 MMboe. And yet, while drilling activity has been on a downward trend, 2017 looks more promising: although the total number of exploration and appraisal wells will likely be on par with the last two years (around 15-20), the average size of the prospects being drilled is markedly higher. Six exploration wells are targeting average pre-drill resources of more than 100 MMboe, compared to an average pre-drill resource size of less than 30 MMboe in 2014-2016. 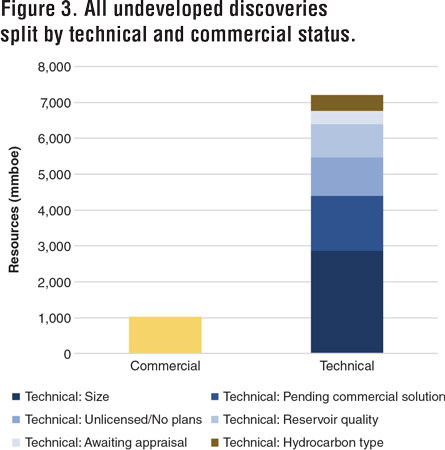 Does this herald a resurgence in exploration? One reason to be cautious is that explorers tend to over-estimate pre-drill discovery sizes, typically by a factor of 1.5-2 in both the UK and Norway, according to WGEG analysis. A second reason is that in the UK, the 200-plus conventional exploration wells drilled over the past decade have resulted in only two commercial finds exceeding 100 MMboe in size (i.e. 1 in 100). One explanation of the apparent optimism for 2017 could be the companies wielding the drillbit. Five of the six wells are operated by major oil companies - BP, Statoil (two), Total and CNOOC/Nexen with, private-equity backed Azinor Catalyst operating the sixth. As with the development pool, these large prospects are associated with riskier plays, with all six wells targeting either HP/HT or stratigraphic traps.

While the short-term increase in production is clearly positive, and quite a feat in a basin of this maturity, a precipitous decline is approaching. The effect of the recent developments, coming off plateau from 2020 and base production decline, means the impact of an overall reduction in the UK’s hydrocarbon production will be substantial. The pool of commercial resources on which companies would normally draw is heavily diminished, with much of it sanctioned prior to the oil price crash. Companies and the government will need to look at how they can deliver commercial resources from the discovered, but undeveloped small pools, as well as increasing exploration activity to refill the development hopper. Exploration will continue to focus on small, near-field opportunities that can deliver a quick return; however, larger, more risky prospects, like those being drilled this year, will also need to be targeted to help replace reserves.

1. These production profiles are technical and assume maximum recovery and do not account for the commercial performance of each individual field. As a result, Cessation of Production may occur sooner resulting in a diminished recovery factor.