BP reports that it recently started up the Thunder Horse South Expansion project in the deepwater Gulf of Mexico 11 months ahead of schedule and $150 million under budget. 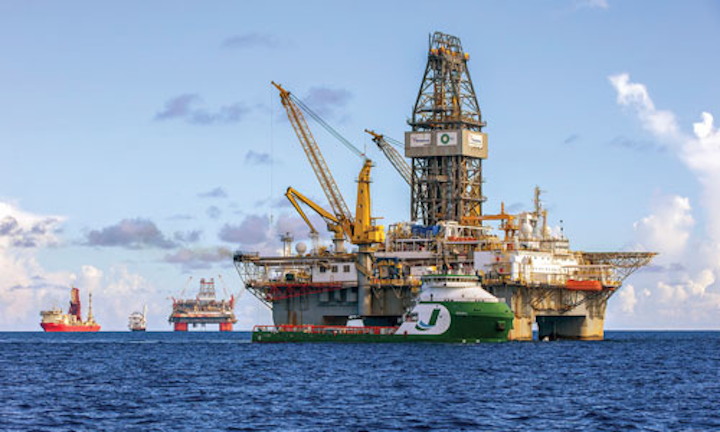 BP reports that it recently started up the Thunder Horse South Expansion project in the deepwater Gulf of Mexico 11 months ahead of schedule and $150 million under budget.

The operator said that the project is expected to boost production at the facility by an estimated 50,000 boe (gross), further increasing output at what it claims is one of the largest oil fields in the Gulf of Mexico. Planned for 2017, it was brought online on Dec. 8, 2016.

BP CEO Bob Dudley said: “Thunder Horse South Expansion - along with our recent approval of the $9-billion Mad Dog Phase 2 platform - demonstrates that the US Gulf of Mexico remains a key part of our global portfolio today and for many years to come. This project also marks the first of several major upstream start-ups expected before the end of this year, and a major step toward our goal of adding 800,000 bbl of new production by 2020.”

The project was completed more than 15% below budget by relying on proven standardized equipment and technology rather than building customized components.

The first new well for the project tapped into the highest amount of hydrocarbon-bearing sand seen to date at the Thunder Horse field, with drilling results confirming more than 500 ft (152 m) of net pay.

Richard Morrison, regional president of BP’s Gulf of Mexico business, said: “The Thunder Horse South Expansion project, brought online ahead of schedule and under budget, proves that deepwater can be done in a cost-effective way, while keeping a relentless focus on safety. It also shows the effectiveness of our strategy in the Gulf, which is all about increasing production from within our existing asset base and large portfolio of undeveloped resources.”

Developed with partner ExxonMobil, the Thunder Horse platform sits in more than 6,000 ft (1,829 m) of water and began production in June 2008. It has the capacity to handle 250,000 b/d of oil and 200 MMcf/d (gross) of natural gas. The facility continued to operate during construction and installation of the new subsea production and pipeline system.

Discovered in 1999, Thunder Horse is one of the operator’s largest discoveries in the Gulf of Mexico to date. BP holds 75% working interest and the operatorship in the project, with ExxonMobil holding the remaining 25%.

Last year it started up a major water injection project at Thunder Horse that will allow for the recovery of an additional 65 MMboe and approved the $9-billion Mad Dog Phase 2 project, expected to come online in late 2021.

During January, the Gulf of Mexico’s numbers showed a notable gain and continued its positive streak from previous months. However, not all data was positive, with some indicators pointing to more uncertainty in the offshore drilling market.

January’s total of 15 new permits grew 36% from 11 in December, and was down just 17% from permitting in January 2016. Shallow-water permitting doubled to four permits in January, with one new well, two side tracks, and one bypass approved.

Seven new midwater permits were filed in January, up from three filed in the previous month. Deepwater permitting showed “a modicum of resilience,” the analyst firm noted, falling just one permit month-over-month to a total of four for the month.

Ultra-deepwater permitting fell back to zero after a new well was filed in December.

Overall, new well permits grew from six in December to eight in January, while side track permits grew 150% to five and bypass permits decreased 33% to two. With the exception of ultra-deepwater, the sharpest decline year-over-year has come from shallow-water permitting, down 75% in 2017 from full-year 2016. Evercore ISI continued to point to these figure as one of particular concern.

“We believe that offshore drilling (and jackup utilization) will continue to languish as long as shallow-water permits remain at historically low levels,” the report noted.

Overall, Evercore said that it remains cautious in allocating optimism to the offshore market, “but permitting trends have certainly shown upward momentum over the two months,” the firm said.