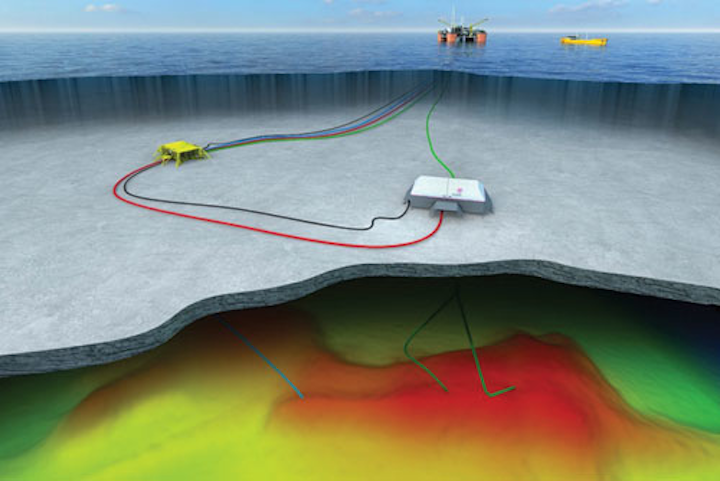 Statoil is spearheading two major new field expansion programs in the Norwegian sector. One is a proposed redevelopment of Njord in the Norwegian Sea to accommodate production from other discoveries in the area. The other involves adding an extra processing platform to the Johan Sverdrup complex in the North Sea.

Njord, which original operator Norsk Hydro brought onstream in 1997, was taken offline last year to allow the field’s semisubmersible platform to sail to Stord in Norway. Statoil has awarded the yard’s owner Kvaerner a $590-million contract for reinforcements and upgrades to the hull and topsides, with Aker Solution performing related design engineering. The remodeled facility is due to return to the Njord location in spring 2020, ready for a further two decades in service, and the Njord FSO is also undergoing life extension work at Kristiansund.

The changes should allow Statoil to recover an additional 175 MMboe from Njord and the satellite Hyme field, and to accommodate production from Statoil’s 73-MMboe Bauge (ex-Snilehorn) field, 15 km (9 mi) to the northeast, where the company plans the first application of Cap-X, a lower-cost subsea production system. Bauge will require two oil production wells and one water injector, with a pipeline to Njord and an umbilical to Hyme, while the field’s gas will be routed via the Åsgard Transport System trunkline. In addition, provision will be made for a tie-in to the platform of VNG’s Pil discovery south of Njord. Statoil’s partner ENGIE E&P Norge estimates the overall cost of the program at $2.32 billion.

At Johan Sverdrup, the commitment to another platform under a Phase 2 development represents decision gate 2 of the project, with a formal plan due to be submitted to the Norwegian authorities in the second half of 2018. Aker Solutions is working on front-end engineering design (FEED) for the new facility and the connecting bridge to the Phase 1 riser platform, with Kvaerner managing the FEED for the jacket. Under a third contract, Siemens is assessing arrangements for power supply from the shore that would also extend to other field centers in the Utsira High region, in line with the Norwegian government’s stipulation. This scheme should be operational in 2022, three years after start-up of Sverdrup Phase 1. Expansion of the complex will allow Statoil to add a further 29 wells, tying in production in stages from the Avaldsnes (east), Kvitsoy (south), and Geitungen (north) satellite areas.

The Norwegian Energy Ministry is looking to offer 102 blocks under Norway’s 24th licensing round, including a record haul of 93 blocks in the Barents Sea, along with nine in the Norwegian Sea. More than half of the Barents Sea blocks are thought to be north of OMV’s Wisting, the country’s northernmost oil discovery to date. The round is due to be formally launched by the end of June.

Lundin Petroleum should by now have spudded its latest appraisal well on its Gohta discovery in the Barents Sea, 185 km (115 mi) northwest of Hammerfest, using the semisubmersibleLeiv Eiriksson. However, the country’s Petroleum Safety Authority was first seeking assurances from Lundin on its planned application of a relatively new managed pressure drilling technique involving use of the Controlled Mud Level method. The associated, heavier equipment necessitates different operational procedures and therefore stricter risk assessments.

Britain’s Oil & Gas Authority (OGA) has offered 25 licenses to a total of 17 companies under the 29th Offshore Licensing Round. This was the UK’s first round in two decades to focus on little-explored frontier areas of the Rockall basin offshore western Scotland, the East Shetland Platform in the UK northern North Sea, and the Mid-North Sea High. Bids were in part based on new geophysical data resulting from the 2015 government-funded seismic acquisition campaign over some of the areas, and the license commitments include firm wells and in certain cases targeting of new exploration plays. OGA expects to launch the much more extensive 30th Offshore Licensing Round later this spring, while further new government-funded seismic data offshore southwest Britain and the East Shetland Platform should be available to the industry by 4Q.

Among the successful bidders to comment on their awards, Statoil gained five operated licenses in the UK northern North Sea, with the company and partner BP committing to three firm exploration wells. It will also join ExxonMobil in a license in Rockall. London-based The Steam Oil Production Co., which has been looking to drum up industry interest in steam flooding to improve recovery from UK offshore heavy-oil accumulations, gained four blocks around the Pilot field.

Denmark’s government has reached agreement with Maersk Oil, as leader of the Danish Underground Consortium (DUC), on safeguarding the future of production from the Tyra field in the North Sea. Maersk had warned that due to progressive subsidence of the field’s chalk reservoir, the platforms had sunk into the seabed by around 5 m (16.4 ft) over the last 30 years, reducing the gap between the sea and the platform decks. Without approval for a full-field redevelopment, operations would have had to soon close down for good, with an attendant impact on production from other Danish offshore fields which is routed through the Tyra complex.

Maersk and its DUC partners plan a full redevelopment of the current infrastructure which comprises the gas processing hub and five satellite fields. The new facilities could also extend production of oil and gas from the DUC’s license area and allow tie-ins from various third-party projects. This in turn should help protect Danish jobs, particularly around Esbjerg, the country’s offshore construction and logistics center.

Pending investment and Daaish parliamentary approval, Tyra will likely shut down in December 2019 and re-open in March 2022.