In 2012, Saudi Aramco decided to reorganize its real-time services and switch to a single viewer with the goal to start the collection of surface sensor data for all of its rigs from spud to rig release. It began work with a vendor-neutral technology provider and a custom solution was brought into production. 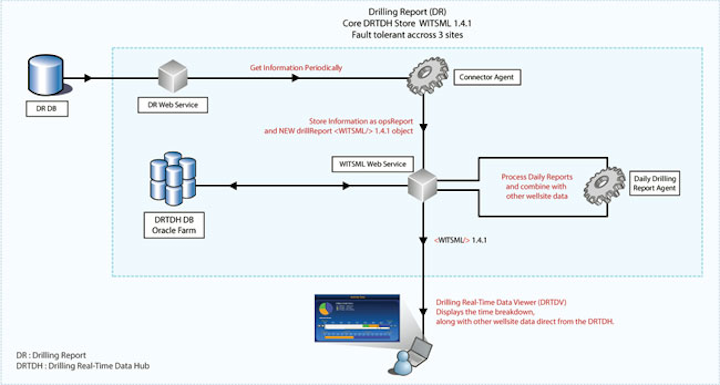 In recent years, the potential value of real-time drilling data has been well documented and applied across the globe. The information gathered is traditionally used for timely and effective decision making for drilling, both onshore and offshore. Real-time work processes have helped the industry save millions of dollars and mitigate the occurrence of critical hole problems. Drilling departments capitalize on the benefits of real-time data - as early as the planning stages of a well - in order to prepare detailed drilling programs based on the history of any nearby wells, and to avoid incidents during drilling.

In 2012, Saudi Aramco decided to reorganize its real-time services and switch to a single viewer with the goal to start the collection of surface sensor data for all of its rigs from spud to rig release. It began work with a vendor-neutral technology provider and a custom solution was brought into production.

In order to stretch the data obtained, further analysis is required of the surface data to calculate the witnessed performance for certain activities on the rig site. The first step is to analyze the data to prepare an operational recognition system. To automatically recognize drilling activities, an algorithm was developed that uses real-time surface parameters to calculate the current operation state. Second, the results of the operational recognition system are then used to determine key performance indictors (KPIs) based on the witnessed operations. As such, it is critical that both calculated methods are as accurate as possible.

This decision was not without its setbacks. In the early stages, it was clear that not all rigs were ready for new data requirements and multiple system upgrades were needed to allow for streaming data. Another issue that became immediately apparent was the quality of the data coming from these rig sensors; the sensors were often not calibrated and therefore not a reliable source of information.

Awareness campaigns and official communications with all involved parties aided in improvement; however, it has also highlighted the need to effectively monitor the quality of the data.

In order to set performance standards, Saudi Aramco first needed to identify the apparent operational activity based on the streaming surface data readings. This automatically generated information is then evaluated based on the information shared in the morning drilling reports generated by rig foreman. The analysis of this information was completed in multiple field tests involving engineers that monitored the calculated activity, and then compared it to the eye-witnessed operational activities while on the rig.

The first example represents the activity breakdown based on the real-time data streamed from the rig site, the complex algorithm allows the viewer to calculate and show the rig state at acceptable accuracy with the actual drilling operations at the rig site. The pie charts show two different ranges of operations.

From this analysis, it was found that automatically generating activities that match 100% was impossible due to fluctuations in the data. However, by tweaking the algorithm it was possible to obtain more than 95% accuracy based on the manual field analysis and with comparison to the information on the morning drilling reports.

The second example shows the comparison of the daily drilling report compared to real-time activity calculated based on the real-time data. The comparison shows very similar results compared to the manual data entered by the responsible people on the rig site. The daily report is manual entry of every 24-hour summary for major rig activities.

After standardizing the format of the data, it was monitored closely for an extended period of time to understand the trend and behavior of each parameter, along with its threshold of calibration. This was achieved using the rig instruments data. In addition, a smart algorithm was developed that could scan all rig sensor parameters coming in real time; row-by-row and column-by-column. This is a smart and flexible matrix approach to make sure that no key parameter is left unidentified. Each and every vital rig parameter is checked for its trend with respect to a series of values over a definite period of time, along with its series of previous values. This identifies the block position to understand if it is a progressive operation, or a maintenance operation, before a final decision is made. The matrix passes through a complex logical tree where an artificial intelligence approach is used to assign cases based on each parameter analyzed. Even if a single parameter is not available, a relative parameter of the same is identified and observed for its trend before the final decision is made. The main parameters considered for the logic are:

To generate the performance analysis, additional data is required from the morning reports. In order to enable automation, a method was generated to poll the Saudi Aramco reporting system to pull the required information from the morning reports. The information required includes tool details, section depths and total depth information, along with other information such as rig details, drilling engineer, and rig foreman. All of the data is then automatically converted to WITSML to prepare it for immediate use.

The following shows the complete workflow for the data transfer from the rig site passing through a secure rig server and then finally to base servers to be used for monitoring and additional calculations. The drilling real-time data hub (DRTDH) is the bridge to convey this information with the meaningful templates as per the requirement from the user. The user-defined templates and data can be visualized from the drilling real-time data viewer (DRTDV). The process in between connect to daily reports data, which can now be read by AramcoLink to pull the information already added from rig site.

Once the required information is generated and is available with the Saudi Aramco data store in WITSML, the appropriate engine is triggered to generate metrics. The above KPIs are then generated for all rigs on a daily basis with a data analysis period of 24 hours. All results are recorded within the Saudi Aramco WITSML server permanently for immediate or future analysis.

As previously noted, data quality is a concern when it comes to the generation of reliable information. This has been factored into the KPI generation process, and the rejection of determined bad data or missing information is flagged within the system, allowing quality matters to be addressed effectively, and also to avoid making decisions based on inaccurate data.

The user of the generated results is the Saudi Aramco drilling department, who can extract information to identify areas of concern, such as a rig with slower than average connections times, poor ROP or tripping performance, etc. Attention to these matters can highlight simple practice or equipment changes that allow for a reduction in nonproductive time, increasing resource and financial efficiencies. This also allows Saudi Aramco to monitor factors such as the impact of changing weather conditions on rig performance.

The current process allows automatic data generation by default, but there is also a dashboard within the solution to generate metrics based on defined time ranges and via multi-rig comparison to easily benchmark a set of rigs if needed.

The most common problem in data analysis is data quality control. This issue is addressed in the system by establishing a set of thresholds on the parameters (RPM, HKLD, TORQUE, PUMPS, ROP, and WOB). These parameters are to be used as a plan or a reference case considering a minimum and maximum threshold. A smart algorithm is added into the system so that users can filter the poor data out and accuracy can be easily calculated. Drilling engineers capitalize on the benefits of real-time data along with the KPIs in order to prepare accurate drilling programs that mitigate the occurrence of hole problems, such as stuck pipe or loss of circulation, and also to identify performance operational indexes.

The analysis generated using thresholds delivers a clear picture on the classification data and is labeled as acceptable, not acceptable, and poor data. This is a major advancement to be able to estimate life, and also the wear and tear of several rig instruments. Periodical maintenance can now be scheduled in advance of poor data delivery, resulting in efficient drilling practices and decision making.

The research and development of the system in use has allowed the national oil company to automate a process which does not accept the logic of others, it accepts Saudi Aramco logic only, offering the drilling department complete confidence in its results. As the industry relies more and more on real-time data, the concerns regarding data quality raised during this project loom, and the industry needs to address this together to ensure that this valuable advancement can be used to its full potential.

The research and implementation of this system has allowed Saudi Aramco to see the potential benefits of calculating daily KPIs using the automated engine. It is clear that the system is still evolving and with the introduction of data quality monitoring and a new Big Data infrastructure within Saudi Aramco, we look forward to a future of further innovation.