Douglas-Westwood remains confident that the FPS sector will continue to play a significant field development role in the oil and gas industry, remaining a crucial component of deepwater and marginal field development. With a number of orders already placed in 2017 and more to come over the course of the year it appears a corner has been turned in the market. As a result, the FPS market is expected to return as a leaner, more focused and economical method of development. 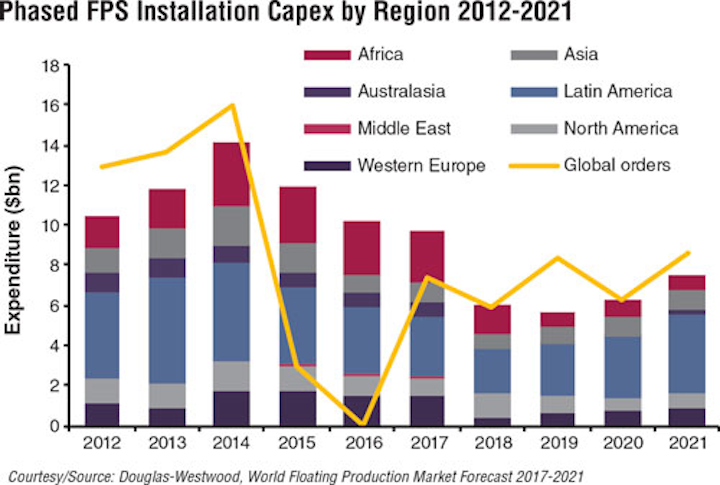 After two of the worst years for floating production systems (FPS) since they became a viable production method, 2017 offers promise of improvement and a return to normality in the market, although a return to the levels seen in 2014 are unlikely.

Due to high costs and long construction periods, the FPS market has been one of the worst affected by the drop in oil prices. 2015 saw four orders - down from 12 in 2013 and 17 in 2014. The average value of vessels ordered in 2015 was also low, with an average cost of $750 million, down from close to $1 billion in 2013. Despite expectations of improvement, 2016 was worse with no units being ordered as operators continually put back sanction dates and reengineered projects to ensure they were profitable in the new price environment.

Douglas-Westwood remains confident that the FPS industry will continue to play a significant field development role in the oil and gas industry, remaining a crucial component of deepwater and marginal field development. With a number of orders already placed in 2017 and more to come over the course of the year it appears a corner has been turned in the market.

As a result, the FPS market is expected to return as a leaner, more focused and economical method of development, after excessive overspending and delays while the oil price was above $110/bbl.

Overall, Douglas-Westwood expects that the value of units installed over 2017-2021 will total $50 billion, driven by units that were ordered while prices were at record levels. The lack of new orders during 2015 and 2016 will not affect capex until 2018, as a large number of FPS units are due to be installed in 2016 and 2017. However, following this influx, a lean period for the FPS industry is expected due to the current lack of orders. This will begin in 2018 and phased expenditure will bottom out in 2019. After this, improvement is expected, though it will be a gradual increase with phased expenditure at the end of the forecast still lower than at any point in the last ten years. Installations in 2017 and 2018 will represent 74% of the total value of units placed.

Units that have been or are expected to be installed in 2017 include the two units for INPEX’s Ichthys field offshore Australia which will total around $4.7 billion, the Stella FPSS (floating production semisubmersible), which began production in February, and Dana Petroleum’s circular FPSO for the Western Isles development. All of the units referenced were initially expected to be installed in earlier years, highlighting the impact that delays can have on the market. 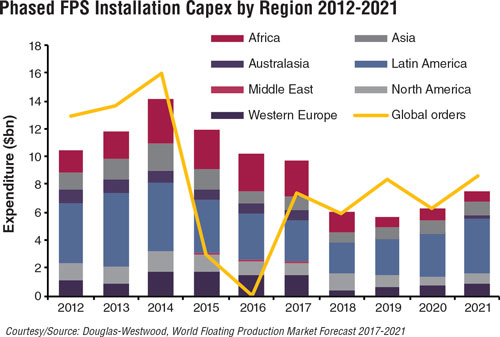 Delays remain a major issue in the industry. The reasons for this vary greatly and range from poor planning, over engineering, local content requirements, and a lack of experience among the reasons for these delays. The 2017 peak is driven by this and this is one of the reasons phased expenditure in 2017 will remain high, while it will have the highest value of units installed over the forecast, totaling $23.5 billion - $10 billion more than any other year over the forecast.

A total of 55 floating production units are forecast to be installed, a decrease from 68 in the previous forecast. This demonstrates the escalation of costs in the FPS sector from 2012 to 2014 with a number of units such as theIchthys FPSO and FPSS and the Egina FPSO costing multi-billion dollars each. Cost escalation is a key issue that has been tackled since the downturn in oil prices. Virtually all field developments were put on hold as operators revised development schemes to bring the per-barrel development costs down to a more sustainable level. For many, this has been extensive, with multiple reengineering projects followed by retenders taking place until prices reach what operators require. One clear example of this is Mad Dog Phase 2, which was canceled while oil prices were at their peak due to development costs spiraling above $20 billion. In late 2016, however BP sanctioned the project with a new development cost lower than $9 billion, $1.3 billion of which was for the FPSS contract awarded to Samsung Heavy Industries.

FPSOs will continue to represent the largest segment of the market both in terms of units (45 installations) and forecast capex (84%) over the 2017-2021 period. This includes a number of high capex units for Petrobras fields in Brazil as well as multi-billion dollar FPSOs such asEgina and the two units for the Kaombo North and Kaombo South fields. With units such as Ichthys and Appomattox FPSS units will account for the second largest segment of capex (10%) with TLPs third (8%). Spars will represent the smallest segment with a forecast capex of $611 million, from one installation over the forecast. This is due to the niche market available for them: There have been no orders since 2012.

Latin America will retain its status as the highest spending region and will also see the highest number of units. In total, it will account for 33% of both capex and FPS installations, all of which will be FPSOs. Brazil will dominate the region and will see 17 of the 18 expected installations in the region. The majority of these FPS units were ordered before 2014 with project delays heavily impacting activity in the country.

This has affected all of the FPSOs that are part of the ‘replicant hull’ project - initially designed to reduce costs and time. Eight converted FPSOs were ordered with identical hulls, however a number of issues including; inexperienced shipyards and late payments have meant that none have been installed to date, with the first units due to be installed in 2017 - some not expected until the 2020s. Petrobras has not ordered a unit in around two years, however, the contract for theLibra and Sepia FPSOs is expected to be awarded this year, though issues with local content have delayed the contract award. The only other unit expected in the region will be the first FPSO for ExxonMobil’s Liza field in Guyana. This field is potentially the first development in a new frontier area, with ExxonMobil making a further discovery with the Payara-1 well in January 2017.

Africa will be the second largest region, with forecast capex of $12 billion (25%). The vast majority of this spend will be in the first few years of the forecast with capex in 2019 - 2021 limited to 6% of regional expenditure, with only two units expected to be installed. The majority of FPS units in the region are large and in deepwater areas - typically resulting in high costs and long lead times. This is the driver of high capex in the early years of the forecast with units such asKaombo (ordered 2014) and Egina (ordered 2013) due to be installed before 2019. Prior to the oil price collapse, East Africa was expected to develop into a major hub, however many of the high-capex units that were expected to be ordered and installed over the forecast have been stalled or canceled due to the low oil price.

By contrast, a resurgence of activity is expected in Western Europe, though this will mostly be seen in 2017 when a number of units that were expected during 2015-2016 are finally installed. In the previous forecast, the region saw capex of $4 billion from six installations until 2021. This will increase to 11 units with a 72% increase in capex.

A number of the vessels expected in 2017 are large, complex FPSOs for fields in the UK such as Greater Catcher and Western Isles development. The Western Isles development was initially expected onstream in 2015, but was delayed until 2017, with the shipyard falling behind schedule due to the challenging design of the vessel. In Norway, the Aasta Hansteen development will be the only spar installed globally over the forecast.

The oil price collapse has had a significant impact over the forecast period and will continue to do so. The 18-month period without orders led to substantially reduced expenditure than previously forecast over 2017-2021. Despite this, delayed projects will keep expenditure artificially high for the next few years as high-capex projects that have suffered multi-year delays finally come onstream.

There are also positives to take from how the industry has reacted with a strong focus on reengineering and cost-cutting seen from operators on all projects, regardless of size. This has helped stabilize and bring down the cost of developments, which were in many cases spiraling out of control. Examples of this include Mad Dog Phase 2, which was ordered early this year as well as the previously canceled Bonga SW and Rosebank projects. The newfound commercial viability of these projects in a lower price environment demonstrates both the extent to which costs have been reduced and the work that has been undertaken to streamline these projects. If cost control continues in the same vein, the FPS market should emerge as a leaner, refined sector. However, this will require operators and manufacturers to remember lessons currently being learned when oil prices recover, something that has not been the case historically.

Marginal, deepwater, and remote fields will continue to be areas of focus for the E&P industry. Furthermore, FPS units are likely to remain the only option for deepwater oil developments for the foreseeable future and an attractive proposition for marginal and remote fields. Given the increasing reliance upon reserves in these areas, we have confidence in the long-term proposition of the FPS sector, despite the current risks and disruptions that are evident.