In part three of this series on deepwater Gulf of Mexico structures, production, revenue, and reserves, valuation estimates from 2016 are used to characterize the inventory. 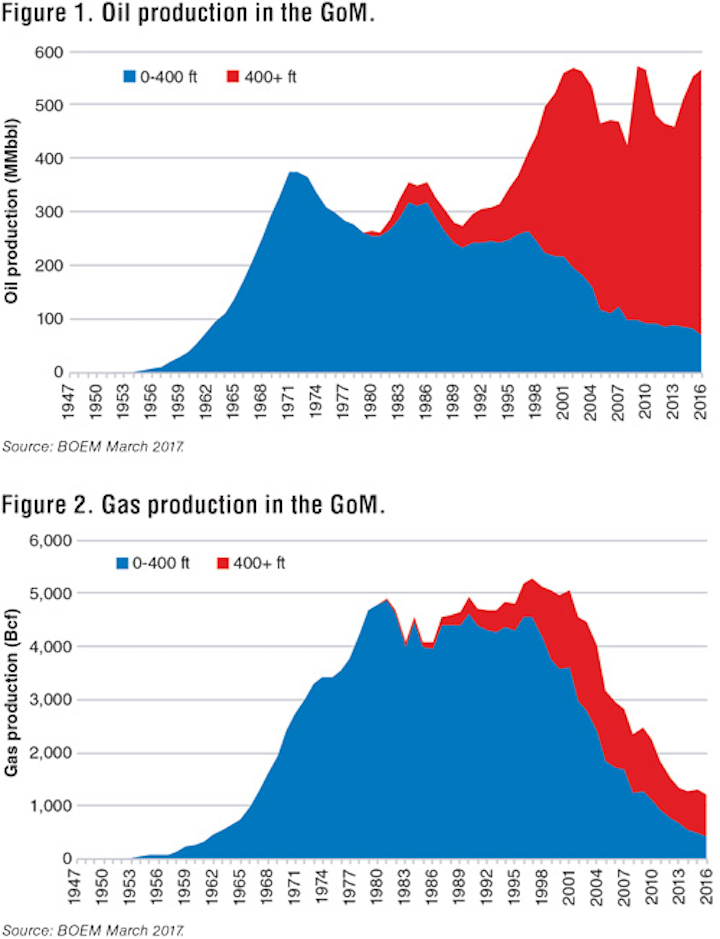 Twenty structures had values greater than $500 million in 2016

In part three of this series on deepwater Gulf of Mexico structures, production, revenue, and reserves, valuation estimates from 2016 are used to characterize the inventory.

In 2016, structures in water depth greater than 400 ft produced 87% of the crude oil and about two-thirds of the natural gas production in the GoM.

Since 1947, the outer continental shelf GoM has produced about 20 billion barrels (Bbbl) of oil and 186 trillion cubic feet (tcf) of natural gas.

In water depths greater than 400 ft, oil production continues to increase, marked by fluctuations due to hurricane activity and the Macondo oil spill, and the intermittent basis of bringing a small number of capital-intensive projects online.

The result is that GoM oil production is near its all-time peak and whether it will continue to increase depends upon whether new production can outpace declining fields.

GoM gas production has fallen steeply from historic levels and is expected to continue to decline. Today, the GoM is primarily a deepwater oil-producing province.

In 2016, there were 36 producing fixed platforms, three compliant towers, and 47 floating structures in the deepwater GoM.

All the floaters except Independence Hub and the three compliant towers are classified as oil producers, while most of the fixed platforms are also oil producers (30 vs. nine gas producers). 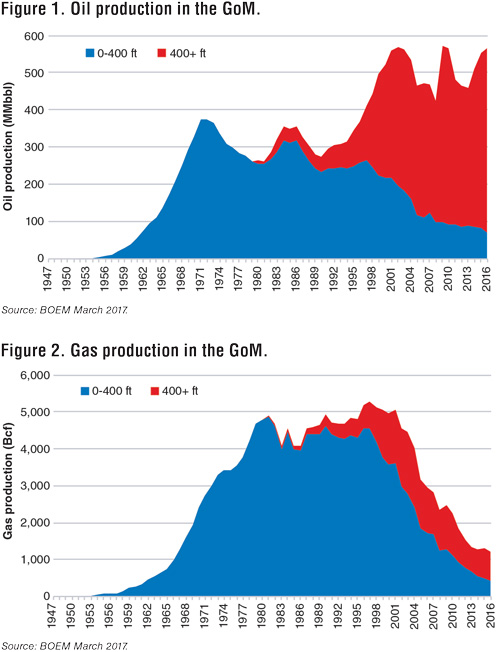 The 47 structures in the floater class produced 469 MMbbl of oil and 651 bcf of gas.

Condensate is valued at crude oil prices even though it is normally discounted and will generate less revenue on a volume basis. Also, since product impurities are not available, no adjustments for quality or location differentials were made. Net revenue received is gross revenue reduced by the royalty payment which for most structures is 16.67% of gross revenues.

Structures which generate less than a few million dollars annually may be considered marginal or approaching marginal status because the direct operating cost for deepwater structures – production and maintenance crew, helicopter flights, service boats, chemicals, maintenance expenses, etc. – are approximately of this magnitude.

Operating cost is not directly observable and economic limits across the sample are variable and depend upon structure type and age, number and type of well, location, maintenance requirements, ownership, terms of production-handling agreements, and other factors.

There were 18 structures which generated between $5-30 million and for many of the structures of this class, would be considered as approaching marginal status.

Reserves are estimated using producing well inventories circa 2016 and standard industry models and assumptions. If reserves are computed according to SEC/SPE definition, there is a 90% chance the estimates will increase from current estimates in the years ahead, and so the values are a lower bound conservative estimate.

Whereas gross revenue is a snapshot of the value of production under current operating and economic conditions, PV-10 provides an indication of the (discounted) value of future production arising from proved reserves.

PV-10 represents the present value of the expected cash flows generated from reserves discounted at 10% on a before-tax basis computed using a standard set of assumptions and procedures on decline rates, oil and gas price, operating cost, and inflation rate.

Like reserves, PV-10 requires a model to compute, and although it is not a GAAP measure it is still commonly used and reported.

PV-10 values for each producing structure was computed using a constant oil price of $60/bbl and gas price of $3/Mcf, 16.67% royalty rate, and $7/boe operating cost.