Hess Corp. is advancing the development of its Stampede project in the deepwater Gulf of Mexico, with first production expected in the first half of 2018. The Stampede field, discovered in 2005, has been deemed to be one of the largest undeveloped fields in the GoM, with estimated gross recoverable reserves in the range of 300-350 MMboe. 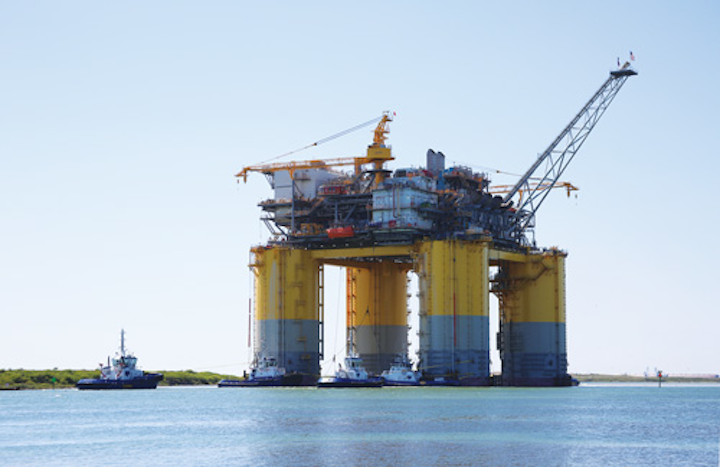 TLP has been installed, two-rig drilling program under way

Hess Corp. is advancing the development of its Stampede project in the deepwater Gulf of Mexico, with first production expected in the first half of 2018.

The field is located in approximately 3,500 ft of water, with a reservoir depth of 30,000 ft, and several pay intervals layered within a span of 3,000 ft at that depth.

The TLP has been installed, with hookup and commissioning progressing on schedule. The subsea production wells are being drilled from two drill centers, with piggable flowlines tying the wells back to the TLP. A two-rig drilling program is under way. One well has been drilled and completed, and completion operations are under way on the second and third wells.

Artificial lift will be required for the field, and water injection may be utilized for reservoir pressure support. A total of six producing wells and four water injection wells are anticipated.

The Stampede TLP was towed out to the Green Canyon area and installed at its site location this past May. Crowley Maritime Corp.’s ocean class tugboats and 455-series high-deck strength barges supported the operation. Crowley says that six of its vessels worked alongside other third-party assets to deliver the platform, tendons, and other equipment from Kiewit Offshore Services’ facility in Ingleside, Texas.

In the first stage, Crowley’s ocean class tugboatOcean Wind and the 455-series barges 455-3, 455-5 and 455-7 worked with other contracted vessels to deliver many 300-ft (91.4-m) sections of 12 3,400-ft (1,036-m) tendons that would secure the TLP to the seabed. From there, the company’s Ocean Sun and Ocean Sky, along with several third-party tugs, towed the TLP through the Ingleside Channel to offshore waters.

Crowley says that the tugs were positioned in a stationary star pattern, and used their tow wires to hold the platform steady in the middle. After Hess and its installation contractor, Heerema Marine Contractors, completed installation and the platform was made storm safe, Crowley’s assets were demobilized and returned to nearshore waters.

Hess has consistently awarded supply and service contracts since the project was sanctioned in October 2014. Some of the more notable contract awards included:

Enbridge Inc. says it plans to build, own, and operate a crude oil pipeline that will connect the Stampede development to an existing third-party pipeline system. Approximately 16 mi (26 km) long with an 18-in. diameter, the Stampede lateral will originate in Green Canyon block 468, 220 mi (354 km) southwest of New Orleans in 3,500 ft (1,067 m) of water at the planned location. The pipeline is expected to be operational in 2018.

Hess has implemented a “lean” approach on the Stampede project that focuses on applying lean principles and methodologies to create value by improving safety, quality, delivery and cost. “One great example of how we’ve applied Lean in Stampede is on the drilling completion side of the business,” said Brian Truelove, Senior Vice President—Global Services. “Here we’ve brought in our partners, and we are working together to implement lean implementation on Stampede.”

Dennis Creech, Vice President Lean Implementation at Hess, elaborated on the concept: “The Lean Stampede drilling and completions project is designed to get our key suppliers working together as a team. We want to identify the white space or handoffs between each one of those suppliers and eliminate the waste between it. The idea is that we want to set the new industry standard for wells drilled in deepwater in the Gulf of Mexico, and we want them to work as a team.”