Shell’s Stones field FPSO in the US Gulf of Mexico is in the deepest-water setting of any floating production system to date. The novel disconnectable turret mooring system won the Spotlight on New Technology award at OTC 2017. 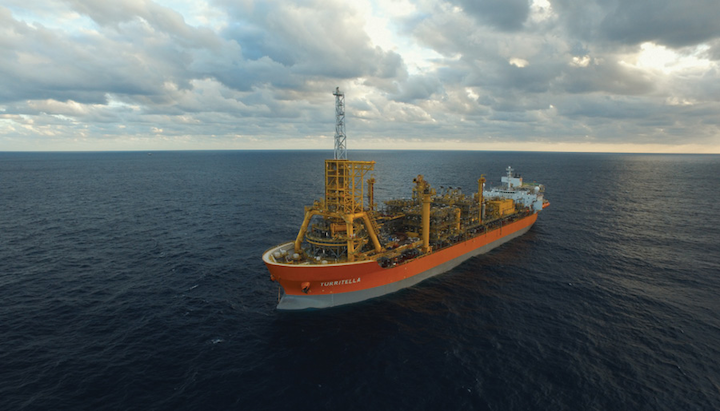 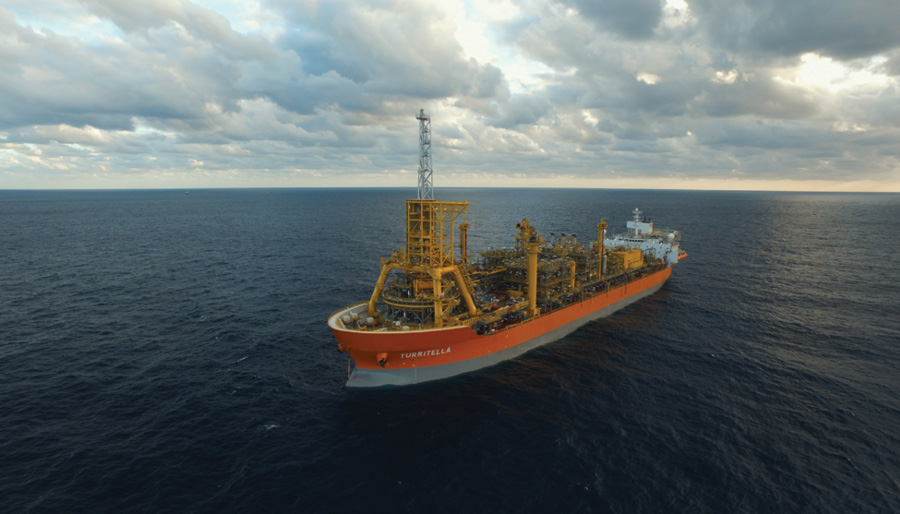 The FPSOTurritella at the Stones field. (All images courtesy SBM Offshore/Shell)

The FPSOTurritella in the Gulf of Mexico is in the deepest-water setting of any floating production system to date, at around 2,900 m (9,500 ft). The location and the demanding operating environment – as evidenced by this season’s powerful storms – necessitated a new type of disconnectable turret mooring system (TMS). The design won the project’s engineering contractor SBM Offshore the Spotlight on New Technology award at this year’s OTC.

TheTurritella, a converted Suezmax tanker, started producing in September 2016 on the Stones field in the Walker Ridge area, 320 km (200 mi) off the Louisiana coast. SBM Offshore and Shell had engaged in front-end development work for the FPSO for two years prior to Shell awarding SBM the conversion and subsequent 10-year lease/operate contract in July 2013; in July of this year Shell exercised an option to purchase the FPSO from the SBM/Mitsubishi/NYK Line joint venture for around $1 billion. The transaction is set to close in early 2018, with Shell assuming full operatorship of the Stones field FPSO. Transitioning the ownership and operations of the vessel to Shell allows the company to pursue additional efficiencies and achieve cost improvements.

This was the first FPSO that SBM Offshore had supplied for a Gulf of Mexico project. The 159,113-ton dwt vessel, converted and integrated at Keppel Shipyard in Singapore, is an SBM Offshore Generation 2 with a designed production capacity up to 60,000 b/d of oil, storage up to 800,000 bbl of crude oil, and up to 15 MMscf/d of gas treatment for subsequent export. When fully ramped up, the FPSO will produce approximately 50,000 boe/d. Its TMS incorporates a disconnectable buoy, said to be around three times greater than the displacement of any current floating production unit buoy. The buoy’s size was dictated by the combination of ultra-deepwater and the choice of high-pressure steel risers. 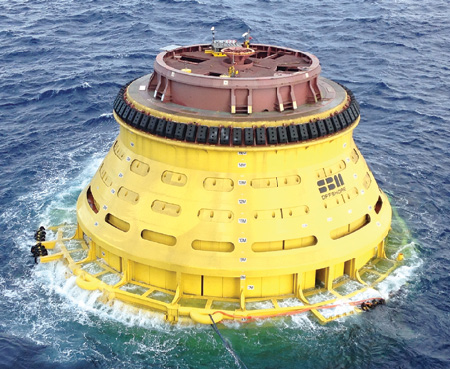 Shell had designed and specified 8-in., 15-ksi steel lazy wave risers (SLWRs) – a world-first on a disconnectable TMS – to accommodate the reservoir dynamics, the water depth, and the large motions and vertical excursion of the buoy. SBM shadowed the design to perform the coupled of analysis of buoy and risers. According to the company, the main issues that needed to be addressed were the vertical excursions of the buoy when dropped (during the disconnection procedure), and the maximum angle deflections of the buoy during the exit from the vessel.

The buoy is designed to operate underwater at an equilibrium depth of 100 m (328 ft), and at depths of up to 200 m (656 ft) in high currents. To achieve the required stability and buoyancy for a structure this size, Shell/SBM decided against the traditional steel plate construction, opting instead for a combination of steel and syntactic foam blocks. According to SBM, the biggest challenge was detailing the shapes of the close-fitting blocks and planning for how to assemble them in the yard. Use of 3D printing assisted the planning process.

SBM considered many options for the foam before settling on a syntactic type (a glass spheres/resin composition), widely used and proven in subsea applications, as the safest and most cost-effective option. The resultant weight of the buoy structure is 1,557 metric tons (1,716 tons), which includes the 954-metric ton (1,051-ton) ballast tank module. The foam blocks are maintenance free, and the central access shaft and external structure can be inspected without the need to shut down production.

A series of high-integrity connectors connect the buoy to the FPSO’s turret, with each connector designed to handle a vertical load of around 1,200 metric tons (1,323 tons) – capacities well above anything previously developed by the industry, SBM claims. To mate the buoy to the turret, both for the initial installation and for subsequent reconnections, the company developed a novel heave compensation system which is built into the turret. Without the heave compensator, the two-body system (buoy and FPSO connected by a pull-in line) would undergo a resonant mode corresponding to typical wave frequencies. 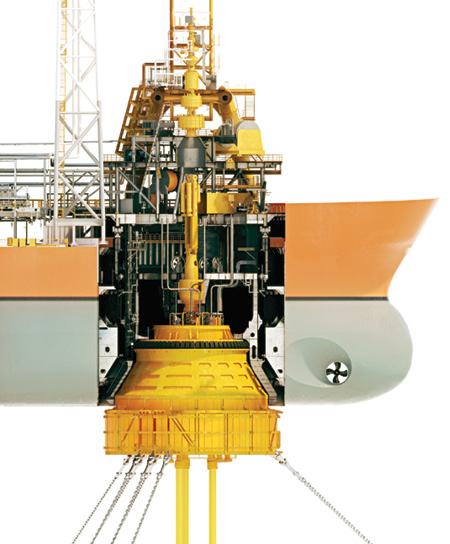 TheTurritella’s large buoy has an unprecedented displacement for an FPSO system, according to SBM.

The buoy’s underside is attached to three sets of mooring lines. Each mooring line incorporates a spring buoy connected to the disconnectable buoy by 120 m (393 ft) of chain. Below the spring buoy the mooring line is composed of chain-polyester-chain sections, with the polyester being in three segments of 1,200 mm length. The attachment arrangement, and the fact that the buoy remains under water and is normally located within the vessel, would have made it difficult to access the mooring lines to adjust tension.

In response, SBM developed and qualified an In-Line Mooring Connector (ILMC), a tensioning device situated within the chain section of each mooring line a few hundred meters from the buoy. The ILMC incorporates a turning sheave and a ratchet, which allows an anchor handling vessel to pull-in additional length of line on the fully installed mooring system to achieve the initial pre-tension required and to later compensate for any stretch in the polyester legs that may occur over the life of the TMS. This solution, the company claims, could allow future turret/buoy FPSOs to be installed in even deeper water.

In the case of severe weather like a hurricane, theTurritella is designed to safely shut in production operations, disconnect, and sail away. Once the danger has passed, allowing production to be reinstated, reconnection should take around 24 hours including time spent inspecting the buoy and the moorings.

In its connected condition (FPSO hooked up to buoy), the system is designed to withstand a 10,000-year winter storm. The buoy/riser/mooring system without the FPSO hooked up is engineered to withstand a 100-year hurricane. The wave height anticipated in the 10,000-year winter storm is around 72% of the wave height associated with the 100-year hurricane.

Following this initial application, SBM is looking to offer the TMS/buoy combination elsewhere in the Gulf of Mexico and to other severe environment areas.