Eni is making plans to drill for hydrocarbons offshore Alaska using extended reach drilling techniques from a man-made gravel island built in nearshore state waters. If the project goes forward, these wells would be the longest extended reach wells in Alaska to date - stretching 6 mi horizontally into an area of shallow federal waters about 6 ft deep. 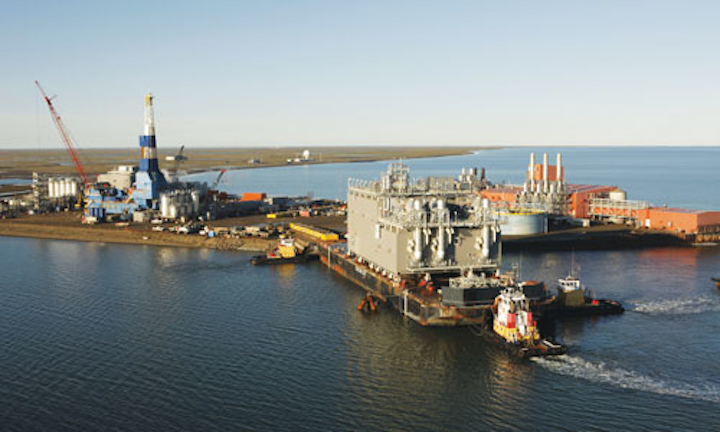 Drills expected to be longest in state history

Eni is making plans to drill for hydrocarbons offshore Alaska using extended reach drilling techniques from a man-made gravel island built in nearshore state waters. If the project goes forward, these wells would be the longest extended reach wells in Alaska to date - stretching six miles horizontally into an area of shallow federal waters about six feet deep.

Plans call for the wells to be drilled from Spy Island, an existing gravel island in state waters, located three miles off the coast of Alaska, about 15 miles northwest of Prudhoe Bay. Eni proposes to drill two extended reach exploration wells from Spy Island drill site into the Nikaitchuq North prospect. The drills will test subsurface targets in OCS leases immediately north of the outer boundary of the state waters.

The well location is situated in the federal outer continental shelf of the Beaufort Sea. The proposed well site lies immediately north of the operating Nikaitchuq field. The drilling would take place from an existing Nikaitchuq field pad on Spy Island.

In July, the Bureau of Ocean Energy Management approved Eni’s drilling plan as part of President Donald Trump’s plan to boost oil and gas drilling, but the BOEM’s approval is conditioned on Eni obtaining permits to drill from Alaska and other federal agencies.

Two months earlier, Alaska’s Division of Oil and Gas had published a state version of Eni’s Nikaitchuq North plan. With the wells being drilled from state land into federal land, both state and federal plans are required. Both plans contain a list of potential wells to be drilled, with an estimated time schedule for the drilling. The state plan indicates that the number of wells drilled will depend on the initial drilling results.

Drilling is expected to begin in December 2017, the BOEM says. Only winter drilling will be allowed, after the Beaufort Sea surface freezes and can support an ice road and surface travel. If all goes according to plan, Eni will become the first energy company allowed to explore for oil in federal waters off Alaska since 2015.

Specifically, Eni is proposing to drill two main wellbores, each with a lateral sidetrack, from Spy Island that will reach seaward into the company’s federal Harrison Bay leases.

Eni proposes to drill two extended reach wells: the NN01 and NN02 wells. Drilling of the NN01 well is planned to begin in mid-December of this year, continuing to mid-February. Flow testing of the well would then take until mid-March to complete. The company may then drill a sidetrack well and conduct flow testing of that, completing the sidetrack in mid-April and the flow testing in mid-May.

If the company decides to proceed with the NN02 well, drilling of that well would start at the beginning of December 2018, with drilling continuing to mid-February 2019. Flow testing of the NN02 well would be completed by mid-March 2019. Drilling and flow testing of a lateral from NN02 would take place between late March 2019 and late May 2019.

Such extreme extended reach drilling will require a powerful drilling rig. The federal plan confirms that Eni plans to use Doyon Drilling’s Rig 15, which is capable of drilling on an eight-foot well spacing pattern on the space-constrained gravel island. The plan notes, however, that the rig will be upgraded for the Nikaitchuq North operations. Upgrades will include increasing the top drive torque from 63,000 ft-lbs to 72,000 ft-lbs and increasing the pressure rating for the drilling mud manifold.

Spy Island has space for 36 producer and injector wells. It currently has 31 production and injection wells and one disposal well, according to Eni.

“Eni brought to us a solid, well-considered plan,” said Walter Cruickshank, BOEM’s acting director. “We know there are vast oil and gas resources under the Beaufort Sea, and we look forward to working with Eni in their efforts to tap into this energy potential.”

In a prepared statement, BOEM said it allowed two public comment periods, one on its environmental assessment and the other on the exploration plan. The assessment led to a finding that there would be no significant impact, the agency says. Eni’s exploration plan notes that fewer marine mammals will be present in winter, reducing impacts to bowhead whales or other species.

The plan has met with resistance from environmental groups that have fought to ban drilling in artic areas. In one of his final moves in office, former Presidentwww.upi.com/topic/Barack_Obama/">Barack Obama used parts of the Outer Continental Shelf Lands Act to ban oil and gas work in the Chukchi and Beaufort Seas off the coast of Alaska, as well as Atlantic coast areas. In April, President Trump used executive action to review these plans, which could undermine parts of the ban. When it was issued, environmentalists claimed that the president did not have the authority to put lease considerations back on the table if they had been already banned. But according to reports, the Eni lease is in part of the Beaufort Sea that is not included in Obama’s order.