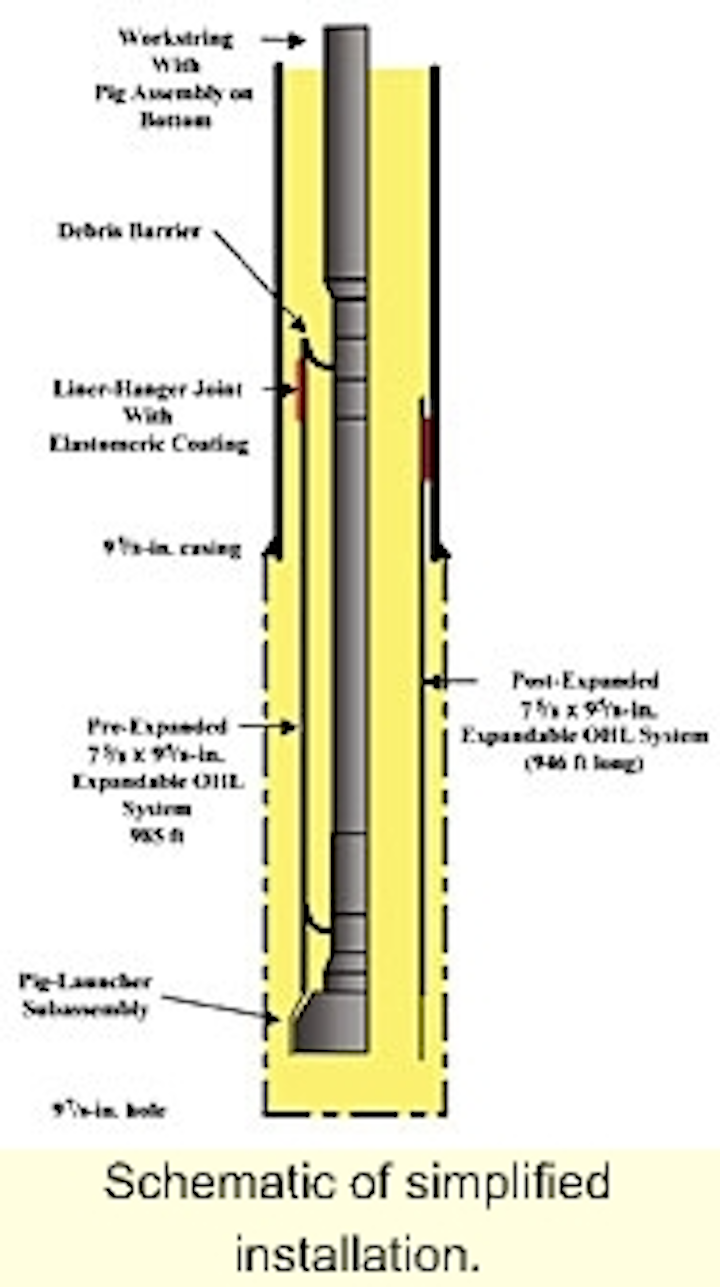 Deepwater and ultra-deepwater exploration and development is getting the bulk of offshore investment, but a well within the sight of land has tested a technology that may revolutionize well construction in all water depths.

For the past year, Shell Technology Ventures and its two partnerships, Enventure Global Technology and E2Tech, have focused on the potential of expandable tubular technology and future derivations. Now, Enventure has put this technology into a commercial well. In November, the contractor, Halliburton Energy Services (HES), set the first expandable-tubular system in well OCS-G-1351 #23 in West Cameron Block 48, part of Chevron's West Cameron 17 Field, just outside of Louisiana state waters in the Gulf of Mexico.

"Severe depletion in an abnormally pressured environment has been a historical problem in the West Cameron 17 Field," said Carey Naquin, Drilling Superintendent for Halliburton. "Attempts to drill through depleted intervals with various mud systems and lost circulation materials had been unsuccessful." Isolating these depleted intervals with casing allows the mud weight to be reduced so the intervals can be successfully drilled through.

Lance Cook, Chief Executive Officer of Enventure, said that the West Cameron installation illustrates a common problem that expandable casing can resolve. There are a variety of situations in which having a contingency string of casing would be very helpful. By incorporating expandable strings into a casing contingency plan, operators can reach objectives that might otherwise not be reached. By incorporating expandable strings in a casing program, operators can save on the cost of large-bore casing programs.

While the development of expandable tubulars was a long, arduous process, the actual expansion process is very straightforward. The interval in which the tubulars are to be installed is drilled with a bi-center bit, or is drilled and then under-reamed to an ID slightly larger than the OD the expanded casing string will assume.

In this application, for example, the hole was drilled to 9 7/8-in. for the 7-5/8-in. (9 5/8-in. expandable-open hole-liner system). This larger open hole ensures that clearance between the expanded tubular and the borehole wall is sufficient for a good cement job.

The liner is run into the hole with a pig launcher assembly on the bottom. This assembly includes the float shoe, latchdown plug catcher, and the pig, or expansion cone. Although the OD of the pig is larger than the ID of the unexpanded liner, the pig launcher (which contains the pig) can still be tripped into the hole through the previous casing string.

This tripping is possible because the pig launcher is constructed of thin-wall, high-strength steel that is thinner than the expandable liner. Once expansion is complete, the liner will have a greater OD than the pig launcher, but both will have the same ID because of the thinner wall of the launcher.

The pig was one of the critical pieces to the puzzle, explained Lev Ring, Enventure's Technology Development Manager. The pig for the West Cameron job was made based on the design of the 9 5/8-in. casing string. The bottom four joints of the 9 5/8-in. casing had a nominal weight of 47 lb/ft which allowed for a slightly greater expansion ID than would be achieved with the 53.5 lb/ft casing used above these joints. Ring said these four joints were inspected before being placed in the hole to determine irregularities or ovality that might affect the optimum design of the pig.

At the top of the liner string is a special liner-hanger joint that includes an external elastomeric coating and external steel rings. When the expansion pig runs through this joint, it thus produces metal-to-metal and elastomeric seals with the previous casing string. Serving as the liner's top seal, this joint replaces any liner-top packer as well as the liner hanger.

Chan Daigle, Enventure's Operations Manager, said that a false floor was built above the drill floor on the rig to set up for running the expandable-liner system inside the casing. Once the liner string was run, a hydraulic spider with a very low profile was used to secure the tubulars at the drill floor. The false floor was installed above the spider to allow the drillpipe to be made up and hung off in air slips centered over the liner. The drillpipe was lowered through the liner and latched to the top of the pig. The expandable open hole liner system was then run in the well on drillpipe.

An inner-string cement job was then performed using the special retardant cement designed to work with the expandable casing. Mike Bullock, Senior Project Manager for Enventure, said the cement was circulated first, then the casing was expanded. About 30 minutes were needed to switch out the cement equipment for the expansion rigging, and then approximately 4 1/2 hours were required to expand the casing.

The cement was designed to give the driller time to expand the casing before the cement set up. The cement slurry was circulated with a latchdown plug at the tail end. Once the dart sealed off the float equipment at the bottom of the pig launcher, a pressure chamber was created in the pig launcher. The hydraulic pressure in this chamber drove the expansion.

Ring said one of the aspects of this technology that is most difficult to explain is the actual force which expands the casing. Many people mistakenly assume the pig is "pulled" through the casing by the work string. Ring said the forces are just the opposite.

He used the analogy of unwrapping a soda straw. If a person tears the end off of the paper wrapper, puts his mouth to the straw and blows, the pressure will send the wrapper flying off the end of the straw. This is similar to the expansion forces. A lubricated mud was pumped down the work string and behind the pig. The cement pump built up pressures of approximately 3,900 psi before the pig moved.

The driller backed off the hookload to allow the work string to rise with the pig. Ring said a hookload of 5,000-10,000 lb is preferable. As the stands of pipe were pumped out of the wellbore, the pumps were stopped. Slips were set, and the stands were broken out. Prior to continuing with the expansion, the pig was lowered slightly so that the mud could circulate around it and clear away any debris ahead of it. Then the pig was raised, the well was pressured up again, and another stand was expanded.

In this manner, a total of 946 ft of liner, which had a length of 985 ft before expansion, was expanded. Once the pig was removed from the top of the liner, the well was reverse-circulated bottoms up and then the connections, liner, and liner lap were pressure tested.

According to Enventure documents, the mechanical seal at the top of the expanded string should have a pullout strength of 500,000 lb/ft and a hydraulic seal of more than 10,000 psi/ft differential pressure. A tapered guide at the top of this hanger joint minimized the lip between the expanded joint and the previous casing string.

Before the float shoe of the expanded liner was drilled out, the mud weight was reduced 4 lb/gal in preparation for drilling the depleted interval. Bullock said this calculated to be a negative 2,165 psi pressure differential across the liner and liner lap.

Daigle said extensive planning, rehearsal, and preparation went into what turned out to be a very mundane 4 1/2-hour process after extensive preparations offshore. To ensure the first commercial application would be a success, Enventure tested the system and the various components in a variety of conditions that led up to a dry run. This testing began with the expanding of the tubulars and the connections in the lab. The expanded components were then tested to burst and collapse to determine their mechanical integrity.

A system of tubulars with connectors was subsequently expanded on the surface, which enabled longer sections to be tested and to be visually observed throughout the expansion process. After expansion, the pipe was cut into sections that were sent to independent labs to be tested for burst and collapse, again to determine the limits after expansion.

Once Enventure was comfortable with the reliability of the tubulars and the connections, a system was taken to a test well in Lafayette, Louisiana, Daigle said.

By this time, Enventure knew the well on which it would perform the first commercial application. All the conditions the team would see on site were duplicated at the test well, which had a full-size rig. The downhole test included the same retarded cement that would be used in the offshore application. The test well also used the same weight of lubricated mud that would be used on the real application to expand the casing.

The team also went out to the rig ahead of time to conduct an inspection to ensure that the operation would be completed safely. The operation was highly coordinated; all involved were linked with communication headsets. All aspects of the operation were tracked and recorded by an on-site Sperry-Sun Insite system. Bullock said this system has the capability of real-time transmission of data to operators' offices.

While this first application was both an engineering and economic success for Enventure, Halliburton, and Chevron, Richard Haut, Chief Operating Officer of Enventure, explained that even greater value-added benefit with expandable-tubular technology will be realized in the deepwater arena. Here millions and potentially billions of dollars ride on casing programs reaching TD with an ID large enough to produce the well economically. Several major projects have been abandoned when trouble zones forced the operator to use up their casing programs before reaching TD.

Haut said that Enventure is looking at several projects to follow up this first success. The first deepwater application may come as soon as next month. Haut said the company planned to develop three product lines: open hole systems such as that used at West Cameron, cased-hole systems that can be used to rejuvenate wells with worn casing, and liner-hanger systems that can significantly enhance the success rate of liner installations.