The deeper the water, the more difficult hydrate problems are to overcome. 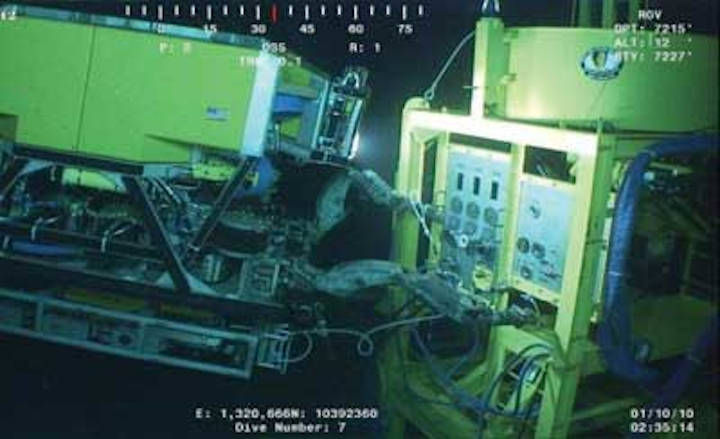 Portable skid unit can deploy from vessel of opportunity

The deeper the water, the more difficult hydrate problems are to overcome. Wright's Well Control Services executed a successful hydrate remediation in 7,200 ft (2,195 m) of water in the Gulf of Mexico using its new Hydrate Remediation System (HRS). On this first deployment, the system cleared 15 mi (24 km) of 12-in. pipeline and removed 9,000 bbl of hydrocarbons, condensate, and other fluids.

The system used is self-contained with redundant pump skid and motor assemblies placed on the mud line using skirted steel mud mats. It consists predominately of two familiar components – a drill motor and a positive cavitation pump (PCP). The steel-skirted mud mat is placed on the seabed, and then the pump with a gas separator on top is placed on the mat.

The connection to the plugged pipeline is straightforward. Many times there will be a PLET (pipeline end terminal) with a jumper that can be used for the connection. On the referenced deepwater GoM project, there was a Cameron valve connector (CVC). The CVC was modified with a 2-in. hot stab and wiper valve. The hot stab was flown in by ROV and connected to the modified CVC. There are other connections in case it is necessary to add chemicals to prevent hydrate plug formation in the HRS.

The HRS is not limited by the hydraulic energy available from an ROV. Rather, it is powered by filtered seawater from the surface via coiled tubing from either a multi-service vessel of convenience or rig. The subsea pump currently used was built for the specific job and depth and can operate in up to 10,000 ft (3,048 m) of water. It is possible to size the pump and motor to overcome the hydrostatic head in the pipeline and push the line contents to the surface. The skid on the referenced project is 71 ft (21 ½ m) long. A skid designed for shallower water would be smaller because the hydrostatic head to overcome would be less than in 7,000 ft of water.

In addition to the two coiled tubing in takes that drive the subsea pump and motor, a 2 3/8-in. coiled tube takes gas via the gas separator to surface. A second similar sized tube sends all hydrocarbons, liquids and solids removed from the affected pipeline asset to surface for storage in MTPs and proper disposal.

At topside, this project had an HT 400 with a 700 hp (522 kW) engine and 800 hp (597 kW) pump with plunger capable of moving 19 bbl/min to drive the motor. This combination can then reach 84 gal/min, but generally runs at a steady 36 gal/min subsea when pumping out all liquids and any solids from the remediated hydrate or blockage.

Another pertinent feature of this pump is that it will pump gas without much loss of efficiency and also can handle as much as 10% sand in the pipeline.

A critical development challenge was the seal assembly. Neither the pump nor the motor turn in a true circle and the seal assembly has to connect two shafts that are turning in different orbits.

Subsea accumulators engage Emergency Quick Disconnects (EQD) acoustically from the service vessel to initiate the operating sequence. Ongoing hydrate operations on the pipeline/subsea asset are shut off by isolating barriers, and four hot stabs eject at tie in points to overcoming differential pressure caused by a vacuum effect in the pipeline versus hydrostatic pressure.

Methanol injection points around the skid and separator are available to prevent hydrate reformation within the hardware if necessary.

The need for the HRS to handle asphaltene and paraffin blocks in association with hydrates was recognized, and an injection system capable of adding multiple chemicals such as xylene singularly or simultaneously was added. As with hydrates alone, an added injection system for the pump skid and separator was designed to avoid asphaltene and paraffin blocks in the remediation system. The system has worked in water depths to 4,200 ft. (1,280 m) when removing these types of blockages from a pipeline.

A number of revisions to the original hydrate remediation system have come from using the equipment in a variety of conditions and applications.

One area with operational improvements is enhanced, ROV-friendly features. Flying lead handling was improved with redesigned parking points and analog gauges were installed where they are more visible to the ROV. Along the same lines, visual indicators were added to improve interpretation of valve actuation.

Not all the improvements required major changes in the arrangement of the parts on a skid. For example, male/female connectors were swapped out for one-piece connectors for added strength and resistance to damage during operations. A filter screen added to the connector prevents coil plugging and repositioned guideposts ease access by the ROV.

The HRS now has a more compact and advance data logging unit with both software and hardware designed to work in conjunction with Wright subsea hybrid valve pack to better interpret internals of pipeline, gas separator and skid. The valve pack was created with a small footprint making it ROV porch compatible and bypassing the need for an ROV attachable skid

A subsea analog gauge assembly was added to accurately interpret the vacuum and absolute pressure data inside the pipeline. This uses gauges strategically placed on skid to monitor pump inlet, pump outlet, and pressure in the gas separator

On the environmental protection front, a subsea flush loop system flushes hydrocarbons out of the skid and separator including the coiled tubing. This flush loop also serves as a primer for the pump system. This makes it possible to place the produced hydrocarbons into a topside containment system.

Wright's Well Control Services is also studying how the HRS could be engineered to remain dormant subsea adjacent to a pipeline for more rapid deployment and remediation of a hydrate or blockage at the first sign of formation. An additional strategy the company is exploring is the placement of hydrate access points at strategic intervals along a new or rehabilitated pipeline, minimizing the distance and optimizing performance for drawing down a vacuum, or injecting chemicals to clear the affected asset.