Fighting the decline curve in offshore wells can be challenging. Scaling, near wellbore compaction, sand buildup, and water breakthrough can all contribute to rapid drop-offs in hydrocarbon production. Coiled tubing operations have been used since the 1960s to combat a range of wellbore challenges, combining bottomhole assemblies and chemicals to achieve the ultimate goal: increased and optimized production. 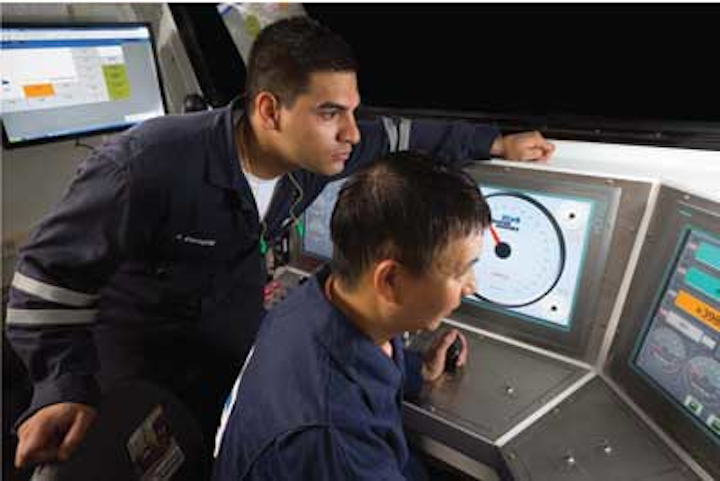 Fighting the decline curve in offshore wells can be challenging. Scaling, near wellbore compaction, sand buildup, and water breakthrough can all contribute to rapid drop-offs in hydrocarbon production. Coiled tubing (CT) operations have been used since the 1960s to combat a range of wellbore challenges, combining bottomhole assemblies (BHA) and chemicals to achieve the ultimate goal: increased and optimized production.

In offshore wells with multiple producing zones, the need to deal with water production is not uncommon. If the water-producing zone can be identified and isolated from the rest of the production string, reducing high water cut typically involves setting permanent plugs. This process requires the well to go off production during the operation, so minimizing rig time is crucial.

For decades, the CT industry lacked a reliable method for referencing conventional CT depth accurately, and surface sensors only allowed crews to guess at what was actually happening downhole in a dynamic CT environment. Unfortunately, using CT meant that the operation would have to be conducted with at least a baseline level of uncertainty, which all too often leads to inefficiencies, missteps, delays, and increased costs.

The Baker Hughes TeleCoil intelligent CT system combines real-time downhole data acquisition while simultaneously providing electrical power to the BHA. The system uses an onboard casing collar locator to log each collar, giving the team reliable depth correlation readings. It transmits pressure and temperature data to the surface using an integrated sensor package. The system is unique because it uses interchangeable BHAs that typically take only half an hour to swap out, requiring a fraction of the time it takes to switch out reels or to rig up a fiber-optic system. Instead of relying on delicate fiber optics, TeleCoil sensors communicate through hard wiring wrapped in a reinforced corrosion-resistant housing. This data conveyance system is capable of maintaining surface communication in high-vibration environments and in spite of extreme fluid rates. The robust connection offers remote control of specialized BHAs while they are engaged downhole, and eliminates the need for batteries.

When an operator in the Campos basin of Brazil observed significant water production in a mature offshore well, it ran some preliminary tests and determined that the water cut was increasing rapidly. Higher water levels mean decreased oil production. The operator's request was to quickly find a solution to the water production issue.

Once on location, the team rigged up a 21⁄8-in. system conveyed on 1¾-in. CT. Well drifting with a positive displacement motor and mill was completed first so that the logging tools and other BHAs would have sufficient clearance to pass through the wellbore. Differential pressure data from the BHA gave the technician the ability to monitor the motor's performance and prevent stalling, thereby improving efficiency. On the surface, it took just half an hour to replace the motor and mill with the logging BHA. Real-time logging data revealed that water was entering the wellbore in the lower production zone, and that significant scale buildup was present in both the lower and upper zones. The team tripped the logging BHA out and quickly mounted a Baker Hughes Roto-Jet jetting tool for the next run. The casing collar locator enabled them to position the Roto-Jet tool in the wellbore where the lower bridge plug would later be set, and an acid solution was pumped through the jetting tool to remove the scale and prepare the wellbore surface for the bridge plug. The team repeated this process above the initial location in the wellbore in preparation for adding a secondary bridge plug to ensure full isolation.

Using the casing collar locator, the lower plug was run to the depth where the scale had been scrubbed from the wellbore, just above the water producing zone in the horizontal section of the well. Pumping pressure was increased incrementally to actuate and inflate the bridge plug. When the system indicated that differential pressure across the BHA had equalized, the team knew the plug had set. The Roto-Jet tool was headed up again and run in hole to the upper production zone, where 700 bbl of acid were pumped to remove scale and stimulate production. The secondary bridge plug was then run and set as an additional barrier to ensure complete isolation of the water producing zone below. They finished with a production logging run to verify the success of the intervention, and handed the rig to the operator to put it in production.

The ability to swap out BHAs alone reduced safety risks to personnel and saved an estimated 83 hours of non-productive time on the rig. The onboard casing locator enabled the crew to remove scale and accurately place both bridge plugs in the wellbore above the water producing zone. Just in rig time and costs, savings on this operation were estimated to be in the order of $1.3 million. But more importantly, the well was quickly put back into service. Production data over the next days and weeks indicated that the plug job and acid stimulation operation had worked together to effectively reduce the water cut and restore oil production to acceptable levels.