Over the past two decades, the pipe-in-pipe (PiP) product has become an essential part of the subsea field development engineer's "tool box." Due to its high insulation performance, it minimizes heat losses from the transported fluid to the environment that more traditional subsea coatings cannot provide. In 2014, Technip installed its 50th PiP via the reel-lay method; the first project was in Australia in 1989. Along the way, the company has advanced the technology at various points. 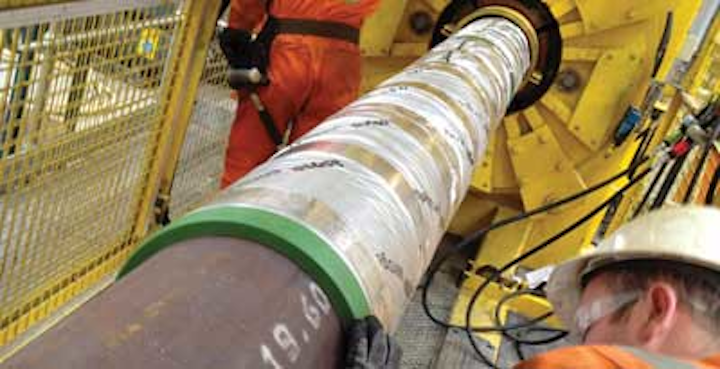 Over the past two decades, the pipe-in-pipe (PiP) product has become an essential part of the subsea field development engineer's "tool box." Due to its high insulation performance it minimizes heat losses from the transported fluid to the environment that more traditional subsea coatings cannot provide. This is achieved using thermal insulation of very low thermal conductivity, such as aerogel, encased in dry atmospheric conditions between the inner pipe or "flowline," which transports the fluid, and the outer pipe or "carrier," which provides the mechanical protection from the subsea environment.

Other benefits of the PiP solution include compatibility with high temperatures (in terms of material and enhanced compliance with large axial loading), stability on the seabed, and protection by the outer pipe against external loads. In some cases this may obviate the need for burial.

In 2014, Technip installed its 50th PiP via the reel-lay method; the first project was in Australia in 1989. Along the way, the company has advanced the technology at various points. For example, the company's third PiP project in 1997 on Statoil's Gullfaks field in the Norwegian North Sea. This represented the first implementation of a corrosion resistant alloy (CRA) flowline, but more importantly, the un-bonded design was to become the essential DNA of the product for the projects that followed.

During manufacture, flowline and carrier pipeline stalks are first welded and inspected. Then the flowline stalk is progressively sleeved into the carrier pipe stalk, while thermal insulation panels and nylon rings are hand-applied at regular intervals. The function of the nylon rings, known as centralizers, is to maintain the two pipelines concentric and to mechanically protect the thermal insulation during each phase of the PiP assembly, installation, and operational life. Once full PiP stalks are completed, they are spooled onto the reel-lay vessel following intermediate tie-in connections.

The next major milestone was the first implementation of a reeled PiP on a deepwater project, BP's Nile field in the Gulf of Mexico (GoM) in 2001. Novel features introduced for this installation included microporous insulation, designed to meet the field's challenging thermal demands, and the implementation of qualified buckle arrestors and waterstop features. The aim was to limit the potential consequences of a (very unlikely) wet buckle event. Experience gained on this deepwater project proved important for future projects in the GoM, West Africa, and Brazil.

But there have also been technical advances in the shallower environment of the North Sea. In 2011, the first implementation of a fully reelable bulkhead on BP's Devenick project in the UK central North Sea was a breakthrough for the reeled PiP product. It enabled tight separation of a PiP in independent sections, permitted the first implementation of a fully reeled T-piece, and led to major enhancements in pipelay schedule efficiency.

In January 2012, the first electrically trace heated (ETH) PiP was deployed on Total's Islay field in the UK northern North Sea. This transformed the technology from a simply passive flowline to an active system. The ETH-PiP technology allows active control of the temperature of the transported fluid, including monitoring in real time of the pipeline temperature profile, using fiber-optic technology.

Subsequent offshore testing campaigns on the installed system demonstrated the efficiency of this active heating technology, which exceeded expectations in terms of reactivity and accuracy. The results also enabled the calibration of comprehensive and sophisticated computational fluid dynamics (CFD) models to accurately predict the ETH-PiP performance in service and underlined the benefits of the technology for addressing complex flow assurance issues.

In parallel, Technip has been performing a comprehensive full-scale hydrate plug dissociation test program. This is designed to demonstrate the capability of the ETH-PiP technology to identify, characterize, and melt hydrate plugs in a safe and fully controlled manner by turning on and then carefully adjusting the external heating power provided by the ETH cables, as monitored by the optical fiber system. This three-year R&D initiative will be completed during the current quarter, and has been supported by several majors in the framework of a joint industry project.

As a result, loops for flowline preservation purposes can be eliminated and field lay-outs can be simplified by considering single line architectures for all the production flowlines.

Furthermore, since the Islay project, a second generation of electrical trace heating cables has been developed and qualified to enable the heating of much longer flowlines. Long tiebacks of satellite fields to existing facilities more than 40-50 km (25-31 mi) with minimum electrical power requirements (i.e. only 1 MW typically) are now feasible.

Finally, the ETH-PiP technology is now reaching a maturity level which should help operators to develop increasingly complex and challenging offshore fields in the future while optimizing the SURF-related capex by minimizing the number of flowlines and risers.