Operators can draw on an array of tools to predict the conditions for hydrates and waxes forming in their subsea production systems. Managing the resultant plugs in flowline networks, however, is far less clear-cut. 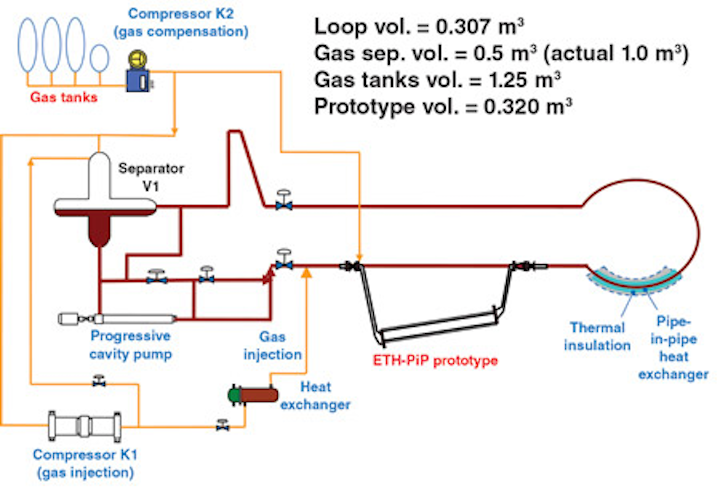 Operators can draw on an array of tools to predict the conditions for hydrates and waxes forming in their subsea production systems. Managing the resultant plugs in flowline networks, however, is far less clear-cut.

The main test rig at Solaize is the 140-m (459-ft) long Lyre loop, designed to operate in controlled conditions of temperatures ranging from 0-50°C (32-122°F), and at pressures up to 100 bar (1,450 psi). It incorporates instruments to measure pressure and temperature variations and can accurately manage flow regimes during each phase, ranging from single liquid or gas flow to stratified, slug or annular flow.

One JIP, led by Technip and partly operated by IFPEN, with support from ExxonMobil, Total and Woodside, is examining the capabilities of Technip's heat-traced pipe-in-pipe technology (ETH-PiP) to cope with various flow assurance scenarios, in particular hydrates during the post-shutdown/re-start process. The initial campaign, which started last year, involved using the Lyre loop to create 150-kg hydrate plugs within an 18-m (59-ft) long, 6-in. OD prototype pipe-in-pipe section.

According to Daniel Averbuch, IFPEN's Subsea Umbilical, Riser and Flowlines program manager, the plugs were formed by adapting the Lyre loop utilities to feed the prototype with a combination of methane gas under pressure (71 bar/1,030 psi) and water, with a dedicated cooling system regulating the external temperature outside the prototype to 4°C (39°F) in order to mimic real subsea conditions. "One of the difficulties of such tests," he said, "is to create a dense and homogeneous plug."

The main goal of the trials was to demonstrate that the trace-heated pipe could be used to melt the plugs in a controlled manner. "Hydrate plugs are composed of large quantities of gas, which when melted can create gas pockets, leading to increased pressure and the risk that the pipe will burst," Averbuch explained. "Controlled melting is essential to avoid this situation."

Instrumentation along the prototype included optical fibers - distributed temperature sensors and Fiber Bragg Grating (FBG) - for monitoring temperature; nine pressure and temperature (thermocouple) sensors and also gas flow meters, all used to evaluate the quantities of hydrates created or dissolved. Results so far have surpassed expectations, Averbuch said. "We were not even sure we could create hydrate plugs in a satisfactory manner." A second-phase program at Solaize this year involves tests in other configurations and plugs formed using real oil instead of gas, as hydrates in gas and oil-dominant are known to be two different phenomena.

Another JIP currently entering its second phase is AHTOL (Additives and Hydrates at Top of Line), which is examining the effects of various additives on hydrate plugs in wet gas situations. The two-year Phase 1 campaign, sponsored by GDF Suez, Petrobras and Total, finished last year. Phase 2, designed to last three years, will involve testing various types of additives (MEG, KHI, and anti-agglomerants, which are attracting increasing interest from the industry) and observing the different flow patterns. As before, the program will entail some modifications to the Lyre loop.

"The objectives are to directly observe the phenomena at play and to derive some physical explanation of the plugging mechanisms when the additives are no more effective," Averbuch said. "Our goal is to derive some guidelines for usage of these additives, i.e. the quantity that needs to be applied." Additionally, the current phase will address questions concerning the behavior of anti-agglomerants, with the aim of applying the results to real field situations. IFPEN plans three different test campaigns under Phase 2, and is considering opening the project to chemical providers as well as operators.

The third and longest-running JIP is Cold Start, which is examining issues associated with re-starting waxy crude oil flows through pipelines following a shutdown. Under certain conditions gel can form in the crude creating a complex rheology. Below the Wax Appearance Temperature (WAT), the gelled oil exhibits viscoplastic, thixotropic, temperature-dependent and compressible properties, due to the interlocking gel-like structure formed by crystallized paraffin compounds and by thermal shrinkage of the oil. For operators, the main concerns are to determine the pressure needed to re-start the flow and the time required to flush the gelled oil out of the pipeline in order to re-establish steady flow conditions.

Phases 1-4 of Cold Start focused on developing an in-depth understanding of the entire process, from production to shutdown to re-start, via laboratory rheological characterizations, tests on the Lyre loop, and development of the StarWaCs-1.5D numerical software. This led to a patented methodology for evaluating the fluid parameters of the physical models implemented in StarWaCs: the JIP partners can provide samples of their oil to assess conditions for their fields, and to determine whether they are correctly applying the methodology.

The subsequent Phase 5 involved further tests to assess how the structure of the gel is formed and how pressure and dissolved gas influences the re-start process for waxy crudes. The current three-year Phase 6 is targeting a more in-depth understanding of the process, leading to development of a new and more precise version of the StarWaCs software.

Additionally, IFPEN plans to study the impact of solid particles on the behavior of gelled waxy crude. "We aim to imitate the presence of water droplets, sand particles, ice, or hydrates when gelled waxy crude is forming in a pipeline," Averbuch said. "Tests will be performed at lab scale using a rheometer to evaluate the impact of different types and quantities of solid particles on the rheological parameters (viscosity, yield stress and so on). We will also apply advanced visualization techniques to evaluate the impact on the particles of the paraffin network."•

Prosernat is currently manufacturing a monoethylene glycol (MEG) regeneration and reclamation module for the Eni Muara Bakau-operated Jangrik gas field development, 70 km (43 mi) offshore Borneo, Indonesia. It will be the first unit of its type ever deployed in Southeast Asia, the company says.

The 500-ton modular unit, built in a yard in Batam, Indonesia, will be installed on the Jankgrik floating production unit, constructed by the Saipem Tripatra Chiyoda joint venture. This is due to enter service in 2016. The equipment will be used to purify MEG that will be injected at the wellhead to inhibit formation of hydrates and resultant freeze-up of the subsea flowlines. It will treat the mixture of MEG, salts, and formation water returning to the FPU, removing the salts and water to recover more than 99.5% of the MEG into the lean MEG. The extracted salts will be unloaded onto barges for further treatment onshore.

Other benefits, Prosernat says, include a greatly reduced risk of corrosion of both subsea and onshore pipelines; significantly reduced fouling and scaling; and smaller circulating volumes in the glycol loop because of the reduced quantities of water, salt, and other injected chemicals.

The module was adapted into a compact integrated design which measures 13 m wide x 13 m long by 14 m high (42.6 x 42.6 x 46 ft) in order to fit space constraints onboard the FPU. It is designed to feed through rich MEG at a rate of 11 cu m/hr (388 cf/hr), and to remove salts at a rate of 80 kg/hr. The unit uses the process developed in the 1990s by CCR Technologies in Canada - Prosernat is the exclusive licensor of this patented technology.