Safely controlling and treating asphaltene deposition is a major flow assurance challenge in the offshore environment, where consequences and remediation can be far more involved and costly than onshore. 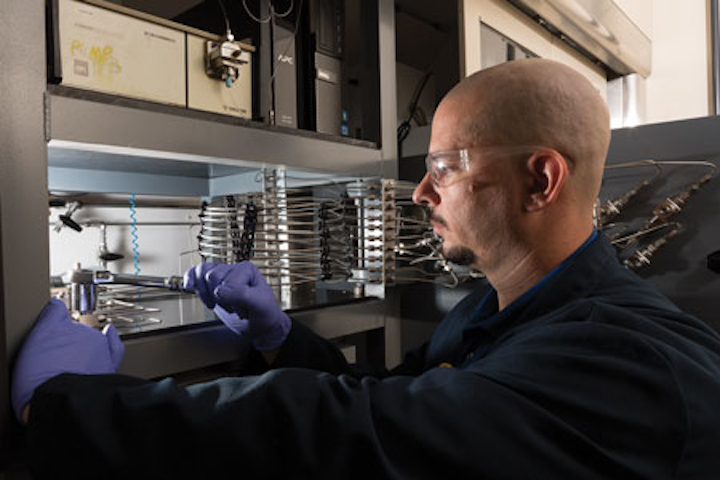 Safely controlling and treating asphaltene deposition is a major flow assurance challenge in the offshore environment, where consequences and remediation can be far more involved and costly than onshore. For example, umbilical failures in a subsea system can lead to unacceptable health; safety; environmental and operational risks; unnecessary delays and downtime; costly repair and replacement expenses; and deferred production. These potential risks make it imperative that deepwater fields be properly evaluated for asphaltene deposition risks. If the risks are properly identified, effective prevention programs can be implemented.

Key performance indicators (KPI) for the successful chemical inhibition of asphaltenes are the reliability, deliverability, and compatibility of the chemical application and its ability to provide uninterrupted production for the operator. First, the type of deposition must be properly identified to determine what steps need to be taken to inhibit the deposits before they can damage the wellbore, flowlines, or other equipment or facilities. Following deposition identification, a stringent qualification process is followed to select the optimal chemical solution, based around the KPIs. Use of qualified production chemicals is critical to maintaining safe, efficient operations and to protecting many aspects of producing assets-including personnel, the environment, facilities, and financial investment.

Reliability of each chemical is substantiated by performing various stability tests, which confirm that there will be no phase separation, gelling, or precipitation of the chemical under given thermal and pressure conditions throughout the application lifetime. Low-temperature stability of the chemical is tested to mimic the temperatures often seen in the cold seabed environment, while high-temperature stability testing is performed to demonstrate the upper temperature capabilities of a chemical. Extreme temperature fluctuations can occur during the transportation and storage of chemicals to deepwater assets.

To further confirm a chemical’s temperature cycling and stability, both short- and long-term, studies are performed to determine the resistance of a chemical to phase separation during thermal cycle stress over long periods of time. The effect of pressure on the stability of the chemical is also investigated under both low and high temperatures to simulate low-temperature umbilical and high-temperature capillary deployment. This combination of tests can provide a holistic view of subsea-certified chemical reliability under harsh deepwater temperature and pressure conditions.

Recently, close collaboration between an operator working in the deepwater Gulf of Mexico and Baker Hughes prevented asphaltene deposition in subsea equipment, flowlines, and surface equipment in a long tieback system.

The deepwater operator was faced with potential asphaltene deposition in its subsea equipment, flowlines, and surface equipment from a well located in approximately 3,800 ft (1,158 m) of water and tied-back to the host, a tension leg platform approximately 16 mi (25 km) away. The well had a bottomhole pressure of approximately 10,000 psi (690 bar) and produced a 38°API gravity crude oil.

Oil samples were collected and sent to a technology center in Sugar Land, Texas, where saturates, aromatics, resins, and asphaltenes (SARA) analysis was conducted. The percentages of these deposits in the crude oil sample were determined using a modified version of the Institute of Petroleum Standards IP143/57 method. Results indicated that the oil contained approximately 1.3% asphaltenes. From the SARA analysis, the colloidal instability index of the crude oil was calculated to be 1.27, indicating unstable oil and validating deposition concerns.

Once the potential risks for asphaltene deposition were understood, the process of designing an appropriate asphaltene inhibition program began. This included selecting an asphaltene inhibitor to be continuously injected via a 5/8-in. capillary line through an uninsulated umbilical along the 16-mi tieback, where the seabed water temperature was approximately 40°F (4.4°C). To achieve optimal inhibition, the inhibitor would be injected down the capillary string before the fluids could reach the asphaltene onset pressure. After extensive laboratory testing and modeling, Baker Hughes’ FATHOM XT deepwater subsea-certified asphaltene inhibitor was selected.

A topsides plant trial was conducted to confirm that the asphaltene inhibitor would not negatively impact the emulsion tendency of the crude or water quality of the overboard water. Following the successful plant trial, a full-scale field trial was initiated. Continuous injection of the inhibitor was introduced into the system at an initial dose of 400 ppm. After treatment had been established throughout the production system, production volumes increased to an average of 5,000 b/d of oil. Emulsion tendency and water quality remained in spec, and the system pressure profiles indicated that asphaltene deposition had been prevented with no signs of deposition occurring.