Assessing the working condition of aging offshore pipelines is a challenging process made more complicated by their location on the seafloor and limited access points. An operator off the coast of West Africa faced such challenges in its plans to inspect 160 shallow-water offshore pipelines that had been in service for decades. 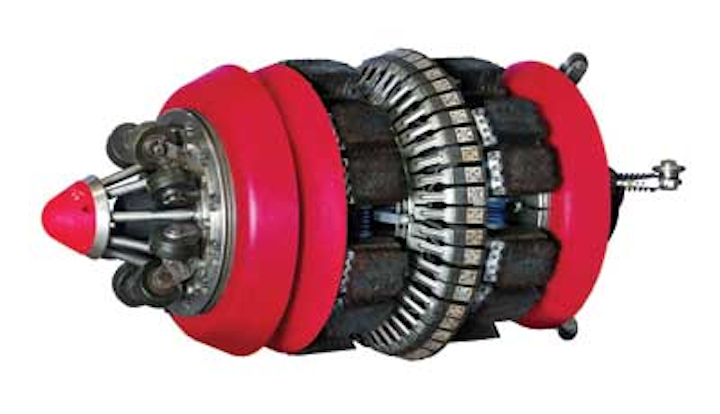 Assessing the working condition of aging offshore pipelines is a challenging process made more complicated by their location on the seafloor and limited access points. An operator off the coast of West Africa faced such challenges in its plans to inspect 160 shallow-water offshore pipelines that had been in service for decades. These pipelines possessed widely varying temperature, pressure, and flowrate profiles, and the operator had a limited local inspection infrastructure to draw from.

The operator needed an in-line inspection solution that could accurately assess the condition of these lines, which ranged in size from 8 in. up to 24 in. (200 mm to 600 mm) in diameter and from 0.5 to 17.3 mi (0.8 to 27.8 km) in length. Service of these lines varied from oil and gas to water injection to multi-phase flow. The majority of lines were smaller in both length and internal diameter (ID), while the largest and longest pipelines were devoted to transporting product from the offshore field to shore.

Baker Hughes had developed an in-line inspection solution, which was both integrated and in country, that could address the operator's needs. The pipeline service company had a local workshop and associated facilities located in close proximity to the operator's onshore operations base. This onshore facility would also house any required spare parts and maintenance activities for the inspection tools. Baker Hughes took advantage of an eastern hemisphere operations base as a coordination location, and assembled and mobilized the tools from Aberdeen, UK, to the local facility.

The inspection strategy called for deploying two different tools to accommodate the various pipe sizes. The first, a multi-channel caliper (MCC) tool, was deployed in line to detect and characterize changes in the internal bore of the pipe, which could indicate integrity issues. The MCC comprises a series of spring-loaded deformation sensor arms positioned around a central tool body, which ensure constant direct contact with the interior pipe surface. The close spacing of the arms ensures circumferential coverage of the pipe wall.

The large number of pipelines to be inspected, coupled with a lack of knowledge of their condition, prompted a systematic inspection process. The MCC tools, in size ranges from 8 in. to 24 in., were deployed first to gauge the internal bore and determine the next steps for repair or further inspection. This tool quickly and accurately determines the extent and location of dents or other obstructions in the pipeline.

The operator ran MFL in all of their pipelines after MCC, including the larger ID pipelines (from 20 in. to 24 in.). The information from the caliper-based inspection runs would be critical prior to deploying the MFL, which is a more expensive and sensitive tool. The MCC indicated whether the ID of the pipeline was large enough for the MFL to pass through without getting stuck at bends or dents. The MCC also provided valuable information on whether the pipeline was clean enough to allow for an accurate MFL reading. And finally, because the MFL has to move through the line within a certain speed range in order to collect meaningful data, the MCC tool confirmed whether or not the pigging speed was in the desired range.

The deployment strategy called for personnel on the platform from where the inspection tools would be launched. To accommodate the various pipe sizes, personnel had to adapt the tools on-site. New MCC tools were manufactured specifically for this operation in sizes that included 8-in./10-in., 16-in./20-in., and 24-in./28-in.

Once the calipers had been deployed and information on the minimum bore of the pipeline was available, the operator had to decide on-site whether to run the MFL tool. By having the same personnel at the site to run both the MCC and the MFL, the inspection was quick and seamless, allowing the operator to stay on inspection schedule.

The high-resolution MFL technology was deployed on those lines that were deemed suitable by the MCC run. After each run, the gigabytes of data recorded by the tools were collected and transferred through a cloud-based network from the West Africa location to an operations center in Europe for analysis.

The analysis reported back a comprehensive report of the defects in each line, as well as its dimensions (depth, width, and length). The analysis also assessed the degree to which the wall strength decreased around the defect and compared that to the desired operating pressure when fluids flowed through the line.

Armed with this information, the operator was able to make a more informed decision on the next steps required to ensure the safe operation of the pipeline. For high-risk lines that show significant wall loss, parts of or entire sections of the line may need to be replaced. Other lines showing less severe wall loss may simply be kept in service, but flagged for future mitigating action.

The high-resolution in-line inspection service, performed on lines that did not have to be taken out of service during inspection, gave the operator the information necessary to determine near-future pipeline maintenance activities.

To date, Baker Hughes has inspected 58 of the field's 160 pipelines, through an efficient mobilization of personnel and tools. The continued use of locally sourced Baker Hughes personnel and inspection equipment will create an ongoing reporting process that allows the operator to track how fast corrosion is advancing in their pipelines and optimize their long-term field maintenance programs accordingly.