Unbonded flexible pipe has been used offshore for more than 40 years, conveying produced crude and gas from subsea wells to surface platforms; and water, gas, and service fluids for injection into subsea wells. 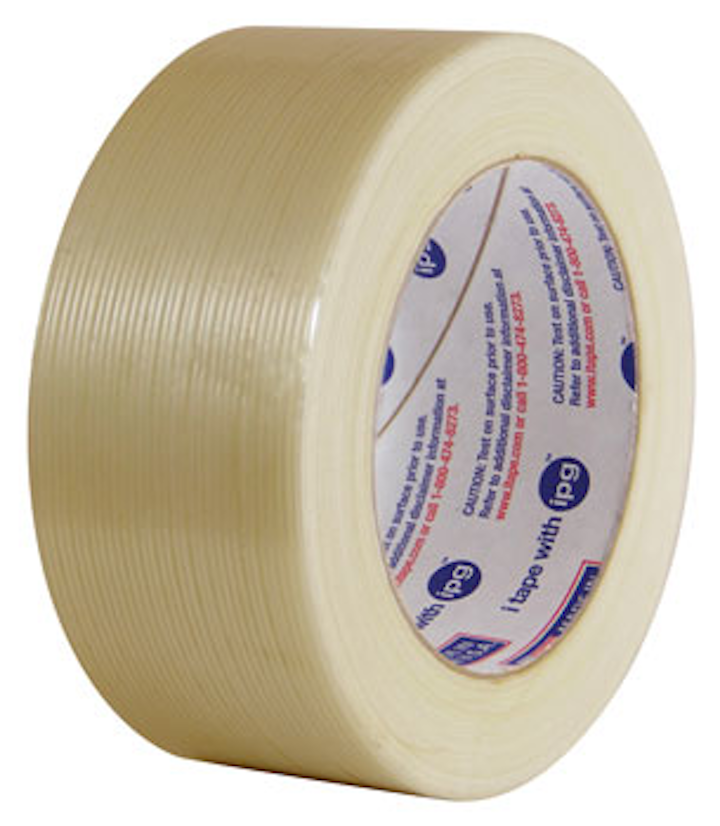 Unbonded flexible pipe has been used offshore for more than 40 years, conveying produced crude and gas from subsea wells to surface platforms; and water, gas, and service fluids for injection into subsea wells. Current applications are in water depths down to 3,000 m, design pressures of 10-15,000 psi, and design temperatures up to 130°C. One major challenge with flexible pipe is birdcaging, or permanent local radial expansion of the tensile armor layers.

Intertape Polymer Group (IPG) says it set out to provide an anti-buckling tape that would maintain tensile properties at 70°C seawater for a 25-year period. The 70°C metric represents the temperature of the pipe wall where the tape layer is applied, with higher bore and ambient seawater temperatures. After extensive review and screening, liquid crystal polymer (LCP) fiber was selected for the fiber reinforcement for its high strength, tensile modulus, creep, abrasion, folding and cut resistance. Polyester was selected for the backing, and synthetic hot melt adhesive was used for the fiber to backing lamination and topcoat. Prototype tape rolls were manufactured and subject to an extensive test program based on API 17J requirements. Comparative tests were conducted with fiberglass reinforced anti-buckling tapes. Other tapes, for more moderate temperatures, were developed and tested to characterize their application envelope.

Two 3.5L glass jars were filled with seawater at 3.5% solids (API Evaporated Seawater Salt). Thirty-two samples each of RG1200 and fiberglass tape were placed in each jar and sealed. One jar was maintained at 40°C, the other at 70°C. Four samples were removed every 120 hours then tensile tested, with split capstan grips to minimize sample slippage.

Tape sections were placed under controlled tension by wrapping the tape ends around capstans and immersing the tape midsection in seawater. Testing is conducted through 10,000 hours to predict the 25-year performance of tapes in up to 70°C seawater.

The static load results for RG1200 are clearly superior to the fiberglass reinforced tape. The slope of the fiberglass regression line increased with each new static load test due to premature failure at the predicted load. The 10,000-hr result was never achieved, so it was extrapolated. 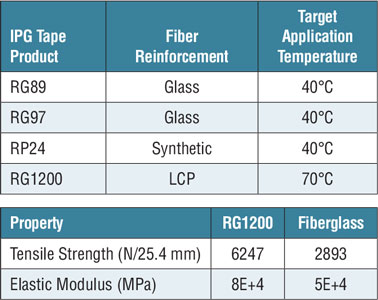 Kink resistance is necessary to maintain tensile strength after the tape is pinched or kinked during handling or installation. To compare kink resistance, samples were folded, then the fold rolled over once in each direction with a 10-lb roller.

Aramid fiber reinforced tape has been employed by some flexible pipe manufacturers for anti-buckling tape applications. Two key properties are tensile strength and creep resistance. If the tape has low tensile strength, birdcaging may result. If the tape creeps, or exhibits high elongation, it could allow the tensile armor to radially expand. Based on published literature, IPG says that LCP fiber compares favorably with Aramid fiber, and has superior performance for initial tensile strength and creep resistance.

IPG says that these tapes have applications in other environments where high temperature aqueous fluids are encountered.