The TurkStream pipeline project is set to begin construction on the first of its dual 32-in. pipeline system later this year. Developed by Gazprom, the project is designed to move Russian natural gas to Turkish markets via the Black Sea. Plans call for the two lines to run some 560 mi each (approx. 900 km each) along the route of the canceled South Stream project, with 155 mi (250 km) of new onshore pipeline to be built toward the European part of Turkey. 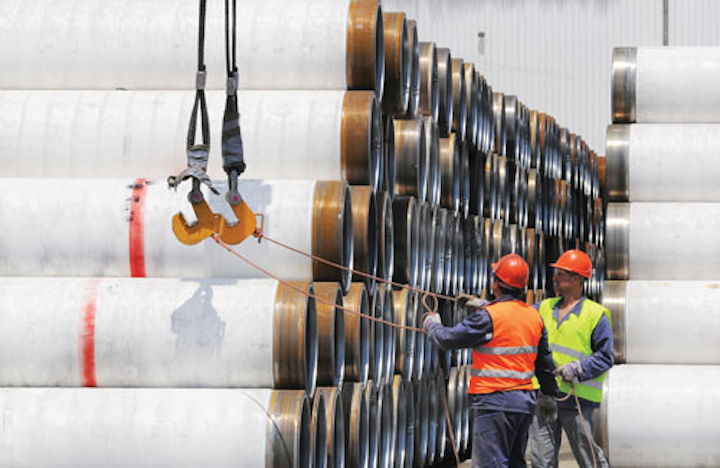 The TurkStream pipeline project is set to begin construction on the first of its dual 32-in. pipeline system later this year. Developed by Gazprom, the project is designed to move Russian natural gas to Turkish and European markets via the Black Sea.

Plans call for the two lines to run some 560 miles each (approx. 900 km each) across the Black Sea along the route of the canceled South Stream project, with 155 mi (250 km) of new onshore pipeline to be built toward the European part of Turkey. Starting from the Russian coast near the town of Anapa, the offshore section of the new pipeline will cross the Black Sea at depths down to 2,200 m (more than 7,200 ft) and emerge onshore near Kikoy in Turkey’s Thrace region.

TurkStream is envisaged to be a transit-free export gas pipeline stretching across the Black Sea from Russia to Turkey and further to Turkey’s border with neighboring countries. The first string of the gas pipeline is intended for Turkish consumers, while the second string will deliver gas to southern and southeastern Europe. These two offshore lines are expected to be in place by December 2019, with each pipeline having a throughput capacity of 15.75 bcm of gas per year. Gazprom subsidiary South Stream Transport B.V. is overseeing the construction of the offshore section.

The project was announced in December 2014 during Russian President Vladimir Putin’s visit to Turkey. It was proposed as an alternative to the canceled South Stream gas pipeline, which would have moved Russian gas through the Black Sea to Bulgaria. The project once again seemed stymied after a Russian fighter jet was shot down over Turkey in November 2015, and Russo-Turkish relations seemed to hit an impasse.

But relations were restored in summer 2016, and the project was revived last September when senior Gazprom management officials met with Berat Albayrak, Turkey’s Minister of Energy and Natural Resources, in Istanbul. Both sides reached an agreement on moving forward with obtaining the authorizations required to launch the project.

The governments of the Russian Federation and the Turkish Republic agreed on a legal framework for the TurkStream gas export project in October. The signed document provides for construction of two strings of the gas pipeline from Russia to Turkey across the Black Sea, as well as an onshore string for gas transit to Turkey’s border with neighboring countries.

Developers say that the TurkStream project will push industry’s technical capacities on a number of fronts. The offshore pipeline, it is claimed, will be the largest-diameter system ever to be laid at water depths as low as 2,200 m. Each of the two offshore pipelines will be comprised of thousands of individual pipe joints that are 12 meters in length, weighing nine metric tons (9.92 tons) each.

Following qualifications, four companies were contracted to manufacture the line pipe: Europipe, a German manufacturer; two Russian producers, Izhora Pipe Mill and Vyksa Steel Works; and a consortium of Marubeni-Itochu & Sumitomo, from Japan. Specifications called for high-quality carbon manganese steel, with a wall thickness of 39 mm (1.5 in.) to improve the mechanical characteristics of the pipe. The portions of the pipeline that will be laid closer to the shore will be coated in concrete for added stability and protection.

With over 150,000 pipe joints, developers say that the entire system will not only be strong enough to withstand the high external water pressure, but also resist an internal design pressure of 300 bar, thus enabling the safe and reliable transport of large volumes of natural gas.

Allseas says it will deploy its multi-purpose construction vesselPioneering Spirit - touted as the world’s largest construction vessel - for the program, starting in the second half of 2017. The vessel has an S-lay tension capacity of 2,000 metric tons (2,204 tons), and six welding stations for double joints and six coating stations.

Engineers have stipulated that thePioneering Spiritcan perform the deepwater installation using the S-lay method. “The vessel has the highest tensioner capacity in the world, and can mobilize sufficient tension to install the TurkStream pipeline safely in 2,200 m water depth,” says Jeroen Hagelstein of Allseas. “In deepwater, the pipe tension is determined by the weight of the pipe as it hangs off the ship; so it is roughly the same in deepwater for the S-lay and J-lay methods.”

Hagelstein notes that the advantage of J-lay in deepwater is that the pipe “can simply be hung off on the ship, whereas in S-lay the pipe must actively be held at the prescribed tension. Also, in S-lay, a large stinger is required that guides the pipe from the horizontal position to the vertical position.” But Hagelstein explains that with S-lay, “more stations are available to work on the pipe in the horizontal firing line than in a vertical tower, so that the method is faster than J-lay. This is the reason whyPioneering Spirit uses S-lay.”