Last fall, an operator in the Gulf of Mexico became the first to successfully launch and retrieve a bidirectional, magnetic flux leakage pig to inspect a platform-to-platform riser. Used as part of Baker Hughes' V-LINE bidirectional tethered inspection service, the high-resolution, wireline-deployed and -retrieved smart pig traversed around 2 mi (3 km), enabling the operator to take advantage of a scheduled platform shutdown to inspect the aging riser. 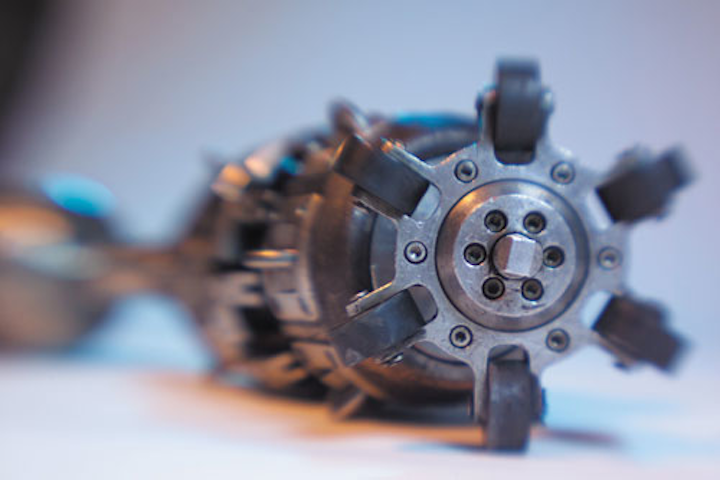 Last fall, an operator in the Gulf of Mexico became the first to successfully launch and retrieve a bidirectional, magnetic flux leakage (MFL) pig to inspect a platform-to-platform riser. Used as part of Baker Hughes’ V-LINE bidirectional tethered inspection service, the high-resolution, wireline-deployed and -retrieved smart pig traversed around 2 mi (3 km), enabling the operator to take advantage of a scheduled platform shutdown to inspect the aging riser.

Although the operator wanted to use the shutdown time for this inspection, it was impossible to do so using a traditional pig because of the pipe configuration. Pigs are typically designed for a single pipe size and cannot travel in a pipe of larger or smaller diameter. In this application, the riser contained a system of valves and different-sized pipes. The smaller line being inspected fed a much larger line, which was more than twice the diameter of the smaller one.

When it became apparent that the riser was unpiggable using traditional methods, the operator and service company began engineering and testing a solution using bidirectional MFL technology. Just eight months later, the service was on location and ready to deploy.

Bidirectional platform-to-platform inspections had previously been conducted offshore using ultrasonic (UT) technology. However, this technology requires the line to be filled with fluid, which was not an option in this case because of the extreme volume of fluid required for the interconnected lines in the platforms and the inability to dry the line after use. Additionally, inspection had been carried out on Gulf of Mexico risers and with MFL previously, but never in combination, and never with bidirectional MFL. Bidirectional MFL provided the option to launch and retrieve the pig from a single point while still reaching the target inspection location.

Among the challenges in developing the service was engineering for the specialized equipment and operational aspects particular to this offshore environment. For example, land-based pipelines are easy to access compared to subsea lines that are buried beneath the seabed and beneath hundreds, if not thousands, of feet of water. The land-based lines are typically out of service when inspection takes place, and don’t have permanent launchers or receivers. Additionally, the average land-based, tethered inspection job is 1,000 to 3,000 ft (305 to 91 m), versus two miles for this application.

In addition to engineering, tool deployment and successful retrieval are more challenging offshore. Rig-up in an offshore environment is much more complicated than on land and subject to additional safety risks, requiring specialized safety procedures. Once the tool is in the line, the forces acting on it can be quite different than those typically encountered when inspecting pipelines onshore. To mitigate these challenges, the service company has developed comprehensive software to better understand the risks to all assets involved.

To extend the bi-directional service offshore, test fixtures were built at an onshore facility in Houston, and modifications were made to adapt the service and prove it would work in the offshore conditions. Because a traditional style of rig-up could not be achieved, a new method was engineered specifically for this operation. This involved removal of a few pieces of pipe and instillation of pressure control equipment. It was also necessary to position a wireline truck on a jackup boat to position the equipment in the best location.

The tool was launched using the service company’s in-house pumping and nitrogen separator services. First, multiple runs were completed with a range of dummy and gauge tools to better determine the feasibility of launching and retrieving the MFL tool. On the final run, the MFL tool was deployed and retrieved on wireline, inspecting just over two miles of pipe. The MFL tool was used to perform a high-resolution inspection of the pipe in both directions, the two data sets guaranteeing that 100% of the pipeline would be covered by the inspection survey should either run suffer some data degradation at an isolated location. The data were downloaded and sent onshore and a data quality assessment performed within 24 hours of the run, confirming that the data were complete and that the offshore operation could be demobilized. The data were subsequently fully analyzed and delivered to the operator in the form of a detailed final report. The outcome of the inspection was that the operator was confident that the pipeline integrity was sufficient to allow the riser to be brought back on-line. By applying the offshore bidirectional inspection process, the operator could avoid riser replacement and realize significant cost savings.

Most pipeline transport systems have a percentage of unpiggable lines. Unfortunately, many of these lines are located in high-consequence areas, where a pipeline failure could have catastrophic consequences to the public, the environment, and the operator. The bidirectional MFL pipeline inspection service uses high-resolution, bidirectional MFL inspection tools on a securely tethered line to inspect for metal loss due to corrosion and other defects in pipelines previously considered unpiggable. The service was developed based on extensive experience using a tethered, or wireline, tool in a vertical wellbore environment, and applying it in a horizontal pipeline. The sensors on the end of the tool are configured to record the length, width, and depth of metal loss defects.

The inspection service can inspect up to 2.5 mi (4 km) of pipeline from a single access point. Being tethered reduces the risk of a stuck tool, controls tool speed, and increases the likelihood of first-run success. Applications in addition to offshore risers include urban areas, refinery and storage terminal lines, short production and distribution lines, and river or road crossings.

The service can operate without a permanent launcher and can be accessed from a single or double entry, depending on the configuration of the line to be tested. In a single-access operation, the line is entered from a single point, and the tool gathers data twice as it traverses both directions in one operation. In double-access operations, the tool is attached to two wireline units. By simply reversing the direction of the two units, the tool can easily and economically be run twice without leaving the line. The bidirectional capability enables the service to acquire two sets of data to compare back-to-back, increasing accuracy in identifying metal loss threats. Data collected during the inspection is delivered with the company’s GEMINIVIEW software, allowing engineers to perform detailed verification and validation of any reported pipeline anomalies.

As the infrastructure in the Gulf of Mexico ages, the need for inspection and assessment of pipelines and risers to extend their lives and mitigate risk increases. The same is true for thousands of similar offshore lines around the world. Vast amounts of data and experience in wireline operations over the last decade have enabled significant advances in safe tool deployment in these complex operating environments, which is increasingly important as offshore pipeline inspection becomes more a necessity than an option.