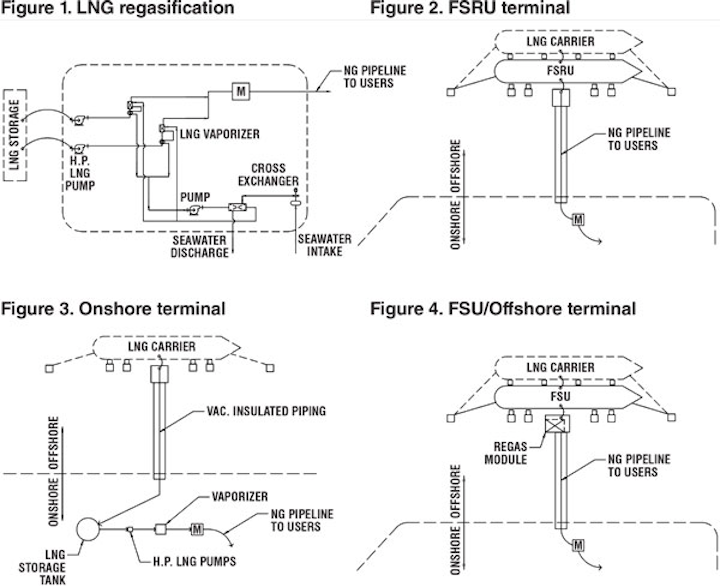 Liquefied natural gas (LNG) regasification marine terminals are being installed in many locations throughout the world where natural gas is needed. The terminals receive, store, and vaporize LNG into natural gas to provide the fuel for power generation and other industrial facilities and distribution to other consumers. The goal here is to compare three development configurations for LNG regasification marine terminals that are located in sheltered waters in terms of capital cost, schedule, and commercial flexibility.

For LNG regasification marine terminals located in harbors or other sheltered mooring locations, any of three configurations may be used. For this comparison, all three cases will have storage for 150,000 cu m of LNG and a regasification rate of 300 MMcf/d. This does not address projects in which the terminal is located in open waters with the possibility of rough seas where a turret mooring of some type is required.

The major concepts for LNG regasification marine terminals in sheltered waters are:

The LNG regasification process system will be very similar for each of these configurations. The LNG will be pumped from storage, delivered to the vaporization facility at the desired NG delivery pressure, and vaporized using an external heat source. For this study, the external heat is provided by using seawater. In cold climate areas, boil-off gas combustion would be used for the vaporization heat source. The vaporized natural gas will be metered and delivered to the gas distribution pipeline.

The marine berth component is similar for all three configurations. It consists of the loading platform, breasting dolphins, mooring dolphins, and a personnel/pipe bridge to shore. Both the FSRU Terminal and FSU/Offshore Terminal configurations receive LNG via an LNG Carrier that will moor to the seaward side of the FSRU or FSU in a ship-to-ship configuration.

The configuration of the FSRU Terminal includes the FSRU and a marine berth for mooring. An FSRU is an LNG Carrier with regasification equipment installed on the vessel, similar in concept to an FPSO facility. The regasification equipment is typically installed in a shipyard and classed by one of the classification societies. The LNG storage is in the hull of the FSRU. The FSRU can be based on a conversion of an existing LNG Carrier or a newbuild unit. The FSRU would be permanently moored at a marine berth facility. The LNG is delivered to the terminal by an LNG Carrier. The LNG Carrier will moor to the seaward side of the FSRU in a ship-to-ship configuration. The LNG will be transferred from the LNG Carrier to the FSRU hull tanks using the cargo pumps of the LNG Carrier. When the cargo transfer is completed the LNG Carrier will demobilize from the terminal. The FSRU cargo pumps will be used to transfer the LNG from the LNG storage tanks to the high-pressure LNG pumps. The high-pressure LNG pumps will provide the energy to transport the LNG to the vaporizer at the desired natural gas discharge pressure. The LNG will be converted to natural gas by the vaporizer, metered, and discharged to the gas distribution pipeline.

The Onshore Terminal configuration includes a marine berth facility for offloading LNG Carriers, vacuum lined piping, onshore LNG storage tanks, and an onshore regasification facility. The storage tanks are built on-site at the onshore facility site. The regasification equipment skids will be installed at the onshore facility site along with the interconnecting piping and control system. The LNG is delivered to the terminal by an LNG Carrier which will moor at the marine berth facility and discharge the LNG using the LNG Carrier’s cargo pumps. The LNG will be transported to the onshore LNG storage tanks via vacuum lined piping and stored until needed. The LNG Carrier will demobilize from the terminal when the cargo transfer is completed. The onshore regasification facility will be located near the LNG storage tanks. As NG is needed, the high-pressure LNG pumps will pressurized the LNG to the desired NG discharge pressure and provide the energy to transport it to the vaporizer. The LNG is then vaporized, metered, and discharged into a gas transmission pipeline. 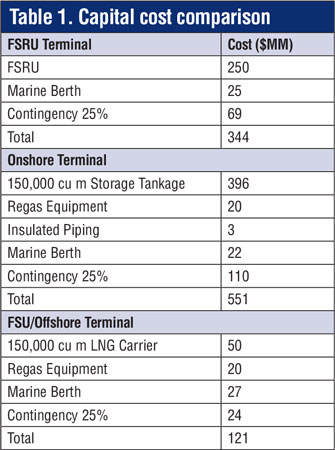 The LNG is delivered to the terminal by an LNG Carrier which will moor to the seaward side of the FSU in a ship-to-ship configuration and discharge the LNG cargo into the storage tanks of the FSU using the LNG Carrier’s cargo pump. The LNG Carrier will demobilize from the terminal when the cargo transfer is completed. As NG is needed, the LNG will be pumped from the FSU using its cargo pumps to the high-pressure LNG pumps that are part of the offshore berth regasification system. The LNG is then transferred to the vaporizer by the high-pressure LNG pumps, vaporized at a rate desired by the user, metered and discharged into a gas transmission pipeline.

The capital costs for each of the three configurations are presented the first table. FSUs and FSRUs can be purchased or leased however, only purchasing is considered for the simplicity of this comparison. Due to the high cost of the onshore storage tankage, the Onshore Terminal configuration is the most expensive.

Commercial flexibility is the ability of the terminal owner to be able to select from a variety of contractors for the provision of primary components of the terminal in order to foster competition and react to market changes during the project life by redeploying the terminal to a secondary location.

The FSRUs are typically deployed with a long-term lease or charter for 10 years or more, partially due to the need to recover the significant capital expense, approximately $250 million, for constructing the FSRU. Typically the terminal owner is bound to a long-term commercial arrangement. The FSRU market is dominated by two or three main players. Newbuild FSRUs require up to three years to construct and FSRUs based on converting existing LNG Carriers can be completed in two years. There are approximately 25 FSRUs operating worldwide and almost all are on long-term charters. Shorter charters are sometime available when a FSRU is between long-term charters but, these are unique situations with the potential for high day rates. The competition in this market is very limited. 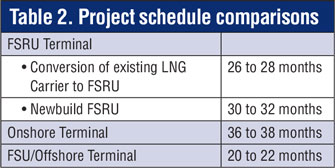 The onshore storage and regasification site is a major facility that requires significant capex. There are several designer/constructor who have built this type of facility. However, due to the basic design of the project components, the facility cost is much higher than the other two options. The payout is a long-term proposition subject to market changes and other uncertainties.

The FSU/Offshore Terminal has a relatively low capital cost and provides significant commercial flexibility compared to the other configurations described. There are many surplus LNG Carriers with inefficient propulsion systems to be used as the FSU. As a result, favorable terms can be negotiated for purchase or lease from one of many ship owners. The regasification module can be fabricated at one of many oil and gas fabrication facilities throughout the world. There are many contractors available to design and construct the marine berth. The marine berth fabrication and installation and the regasification module installation and hookup can be accomplished by many contractors throughout the world, including some in less developed areas, providing host country content, if needed.

The FSU/Offshore Terminal configuration provides a terminal owner the option of developing a LNG regasification terminal with a significantly lower capital cost or lease rate and much greater commercial flexibility compared to the other options. The lower capital cost is due to the use of a surplus LNG Carrier for LNG storage and the simplified installation of the regasification equipment on a fixed platform.

Additionally, this configuration has the shortest project execution schedule. In terms of commercial flexibility, if the market conditions at the primary site change, the FSU and the regasification module can be relocated at a secondary site at a relatively low additional cost.