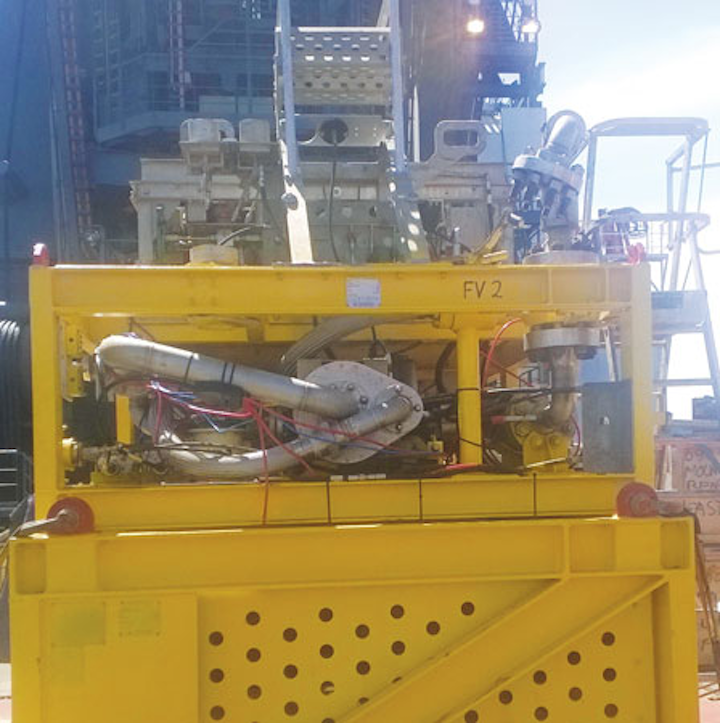 Flooding, cleaning, and gauging 11 production flowlines and nine water injection flowlines at water depths of 1,050-1,410 m (3,445-4,626 ft) presented a wide range of challenges for a predevelopment projectoffshore Angola. In addition to the technical demands of executing the deepwater project, multiple changes in the already-challenging mobilization schedule required matching a pre-commissioning equipment spread capable of providing the contracted flow rate and pressures to the available deck space of the various vessels under consideration. The success of the precommissioning project required a coordinated effort that involved multiple executions of deepwater remote subsea flooding, testing, and dewatering operations, as well as strong in-country assets, planning, and management.

The deepwater development project produces four discoveries from an FPSO. Production began in June 2014, with capacity set at 160,000 b/d and with proven reserves of 500 MMbbl. As of May 2015, the development had produced 2 MMbbl.

The scope of precommissioning responsibilities included subsea pigging of production and water injection flowlines; surface precommissioning on the construction vessel and FPSO; dewatering and monoethylene glycol (MEG) conditioning of the gas export line; and umbilical testing and monitoring from the umbilical installation vessel and FPSO locations.

The FCG operation used seawater to propel single, multipurpose pigs through each of the flowlines. The water was filtered to 50 microns and treated with a standard chemical mix of corrosion inhibitor and fluorescent tracer dye.

FCG operations also were performed on the gas export line prior to hydro-test operations. The line was installed full of air at atmospheric pressure. Two multipurpose pigs were propelled through the line with seawater filtered to 50 microns and chemically treated with the same mixture used in the production and injection lines.

Prior to launching the FCG pig, a slug of filtered seawater (1% of the full line volume) was injected into the gas export line. The pig was launched via the free flooding system, and flooding continued until the flow rate was near zero. The line was then flooded at approximately 99% of full volume. The precommissioning system was isolated, and the receiving FLET valve was opened to vent air trapped in front of the pig to enable cage installation.

The filtered and treated seawater was pumped from the launching FLET to push the pig to the cage. Pig and cage were recovered, and the cap was installed on the receiving FLET. A contingency foam pig was installed in the gas export line, in case the FCG pig required recovery.

To execute these operations, the pumping skid was enhanced with a positive displacement flow meter for high-viscosity chemicals, hydraulic flow and pressure measurement to monitor remotely operated vehicle (ROV) performance, and increased battery capacity and an ROV-operable on/off switch for improved subsea logger run time. The low-pressure filling pump was moved from the pumping skid to the flooding skid to enable one skid to perform both functions. These changes were designed to reduce the number of deployments and improve diagnosis of any performance issues with the unit or ROV, leading to a reduction in vessel time and lower overall costs to the client.

Hydro-testing and MEG spool leak testing for the gas export system was conducted in four stages, as follows:

Barrier leak testing of the live PLEM was performed using MEG to ensure the system was safe for the spool installation, in parallel with new procedures agreed to with the client. Adaption to the changing schedule and methodology was important to efficiency improvements as the project progressed.

The project’s two production loops and four water injection systems were hydro-tested independently after all main system components had been mechanically completed. The production loops and water injection systems were subjected to a 24-hour hydro-test with a test medium of filtered, treated, and dyed seawater. After the hydro-test was accepted, the pressure in the system was reduced to atmospheric pressure in a controlled manner.

Custom manifolds allowed the vessel to perform leak tests with the assistance of a remote logger and ROV. The manifolds allowed three systems to be hydro-tested simultaneously and monitored independently. The approach reduced the number of deployments and freed the vessel from a 24-hour monitoring period, allowing it to be used for other filler works, which optimized total cost. The extended testing period provided more test parameter information, which provided the basis for a faster decision on test results. Detaching the vessel from the testing system enhanced safety.

The dewatering nitrogen spread was located on the dewatering vessel and connected to the MIV via a 2-in. hose, while the support vessel assisted in operations at the receiving end.

Dewatering was accepted with all pigs in the receiver and a MEG concentration above 95%, according to support vessel sampling. When the 12-in. (273-mm) x 13.8-mi (22-km) pipeline was dewatered, it was packed with nitrogen at 13 barg above static head pressure at the receiving end (130 barg).

Key aspects of the dewatering operation (which consisted of MEG swabbing, dewatering, drying, and packing) included producing nitrogen at a purity of 95% or greater and a dew point of -40°C or better at atmospheric pressure.

Equipment used for the dewatering operations was sized to maintain a minimum pig speed of 0.15 m/s at 135 barg. The pigs were steel-bodied and capable of negotiating 5D bends in the pipeline. Three were equipped with electromagnetic transmitters with a battery life of two months. All six were equipped with magnets to confirm passage.

Prior to dewatering operations from the main installation vessel, a pig receiver was installed, and FLET valve positions were aligned. Pig signaling devices were installed at the upstream pig launcher and the MEG sampling tool at the pig launcher 2-in. stab receptacle.

After launching the dewatering pigs, an ROV was deployed from the support vessel at the receiving FLET to confirm receipt of the pigs and to operate the MEG sampling tool. MEG samples were taken from four slugs, with special attention given to the last slug between pigs five and six. The tool was then recovered by the support vessel, and MEG was tested for changes in density. Additional MEG samples were stored in sealed bottles for further analysis by the client. This subsea sampling was able to confirm MEG quality in the field, giving the client assurance of a trouble-free startup.

Umbilical services included pre/post load-out testing before or after transfer to the installation vessel; transpooling monitoring and lay monitoring; predeployment/preinstallation testing; and post installation pull-in and hook-up testing once the final position was reached.

The umbilicals included the following:

Umbilical precommissioning services typically include multiple testing stages. Pre-load-out testing of the umbilical to verify its integrity prior to mobilization is often part of the manufacturer’s factory acceptance test. For this project, any umbilical being deployed from the vessel’s carousel was subject to transpooling monitoring to ensure that the umbilical tubes being transferred were kept within a required pressure window and to verify that no damage occurred to the umbilical throughout the process.

Post load-out testing was conducted once each umbilical had been positioned on-board the vessel to test all hydraulic, electrical, and optical elements of the umbilical against their design specifications. Lay monitoring was carried out as each umbilical was installed to confirm the integrity of the umbilical at this critical stage. Once the end of an umbilical is reached, a final test can be performed from the vessel to confirm the umbilical has been installed without damage and meets all criteria. Once complete, the precommissioning equipment was removed from the umbilical to allow completion of the installation procedure. After connection to the subsea or surface hang-off, a final test from the operations platform/FPSO was undertaken to demonstrate the umbilical’s integrity and readiness for operations.

Equally important was the ability to respond rapidly and effectively to a wide range of project changes. As a result, the precommissioning met all project objectives, including executing critical-path dewatering operations on time and without incident.