Statoil's ambitious goal of launching a subsea factory in deeper and colder environments by 2020 is on track. By making incremental improvements and tapping into innovative technology from other industries, Statoil and a few service companies are redefining the layout of the subsea sector by creating compact separation facilities on the seabed as a new, low-cost way of producing oil from deepwater and remote locations. 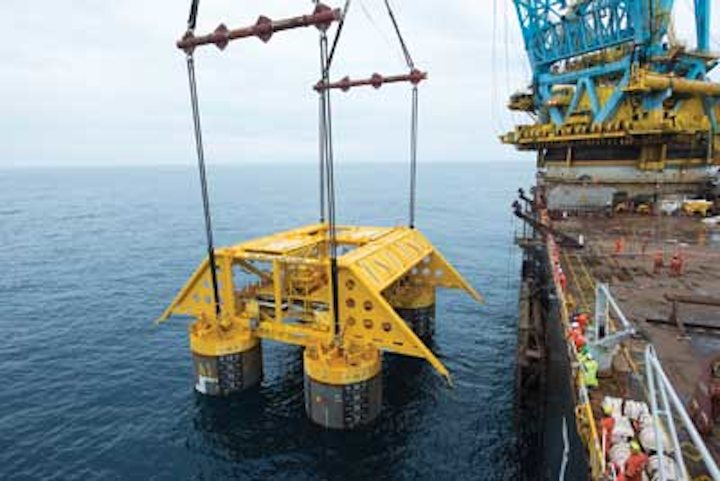 Statoil's ambitious goal of launching a subsea factory in deeper and colder environments by 2020 is on track. Over the course of several years, the company has made several incremental improvements to its existing technology that should make it possible to employ remote-controlled transport of hydrocarbons at any offshore facility.

"The future resources are further from the land, at greater depths and in colder and harsher environments," the company says. "The subsea factory will be vital to realize business opportunities for Statoil in these areas."

By making incremental improvements and tapping into innovative technology from other industries, Statoil and a few service companies are redefining the layout of the subsea sector by creating compact separation facilities on the seabed as a new, low-cost way of producing oil from deepwater and remote locations. While existing subsea production systems usually consist of static components that can remain in place for years, the subsea factory that Statoil is developing involves a standalone subsea production system on the seabed. It will perform tasks that normally are conducted on the surface. For instance, it will employ single- and multi-phase boosting, gas compression, gas-to-liquid and liquid-to-liquid separation, as well as water reinjection.

The recent technological steps in realizing this goal include completion of the first subsea solution for the separation and injection of water and sand from the Tordis wellstream, and the development of the first subsea facility for injection of raw seawater on Tyrihans. Several projects, the company noted, such as the oil-dominated multi-phase transport on Tyrihans and Snohvit's gas condensate transport are a few examples of the major components of the subsea factory development.

One of the biggest hurdles the design has to overcome is bringing power to the factory, which the company is addressing through a step-by-step approach. Statoil started out with 300 KW, then gradually moved up to 11.5 MW on the big compressors, which is a big increase in the power demand for this equipment.

"Along with that, we have qualified the equipment in order to transfer power from shore or from a platform down to the equipment. What we are working on now is instead of just connecting a power cable to each component, like if you have two pumps on, maybe you have one cable to each pump, we are distributing the power subea," stated Statoil's Subsea Technology Chief Engineer Rune Ramberg.

"We have one big power cable brought subsea which will allow the distribution of power to different users," Ramberg continued. "But this initiative is in collaboration with the industry and with other oil and gas companies. We have two big development programs going on now in order to help with realizing this goal."

Statoil partnered with Siemens to help turn subsea factories into a stable and safe power supply by creating the Siemens Subsea Power Grid. It enables subsea processing at a completely different scale than before, said Bjorn Rasch, head of subsea power at Siemens.

Siemens made use of tried and tested air-based components and solutions, which were adapted and qualified for use on the seabed. These components, mainly transformers, switchgears and variable-speed drives (VSDs), together with a comprehensive communication and control system, then were combined to form a complete subsea power grid able to supply and distribute electric power on the seabed.

"Getting components developed in a different environment to function under pressure and in oil have been the most challenging," Rasch noted. "The infrastructure required has been considerable, and we have, in connection with the project, established a unique test lab in Trondheim. This has facilitated testing of areas such as pressure, temperature, current, and voltage."

The project received a go-ahead following a thorough market survey conducted by Siemens, which showed a demand in the market for this type of solution. Chevron was then contacted and informed of the development plans, came on board, and invited Statoil, Petrobras, and ExxonMobil. Seimens led the development, and the four operators contributed to the project with their experience and needs.

"A positive aspect of this collaboration is that the solution is adapted to suit the requirements of all four operators," Rasch said.

In addition to its multi-operator suitability, the solution is standardized for various pressure and depth levels. Standardization was a key component in the design of this technological advancement, the Siemens stated. The Siemens Subsea Power Grid is qualified for up to 9,843 ft (3,000 m) water depth, and it also meets the requirements set by Chevron, Statoil, ExxonMobil, and Petrobras.

The solution can be used for a range of different projects including a variety of water depths, and will have the capability to communicate with other systems over standardized protocols. This entails integration with solutions from alternative suppliers, such as OneSubsea, Aker Solutions, and FMC.

"Collaboration with the operators as well as the other large suppliers is the key to success, and is paramount for future growth. Hence, this is an important area of focus," said Rasch.

"Another important aspect is that the solution does not rely on any active cooling functions, and is entirely based on passive cooling techniques. There are no moving parts susceptible to damage, prolonging the system's lifespan," he noted.

The plan is for the solution to be ready for underwater testing in 2015, and for delivery in 2016.

As for testing of the gas compressors that will be deployed on the Asgard field in 2015, another tasked item Statoil has been working on is testing of this component. The first testing of Asgard began in 2007 when the first prototype was launched. Once it was developed and tested, Statoil ordered four more compressors and the first one, titled a test compressor, was completed and launched last year. Currently, the company is testing the remaining delivery compressors.

"So far, it looks good," Ramberg said. The key thing is, this type of compressor has been operating topside for a long time. Now, we are putting them subsea so we are placing a lot of stuff inside a pressurized container, and then we have penetration in that pressurized container going between different containers. We are testing the connections and the new atmosphere of the equipment. We are testing how to disconnect, how to connect, and how they operate over the long-term in a subsea environment. We are testing that everything works according to how we planned them.

"Before that, we tested the capability of the compressor – was it able to produce the pressure increase we needed and could it produce the amount of gas that we needed," said Ramberg. "Now it's more down to the control system of that."

While constructing this cutting edge technology, Statoil has been mindful of rising offshore costs while ensuring that deployment will be profitable with the goal in mind of launching the subsea factory by the deadline.

"The rising cost is of course limiting our options to deploy this," Ramberg observed. "What we are focusing on now is really the short-term goals -- where we can use part of the subset factory in order to improve the topside functionality that we already have.