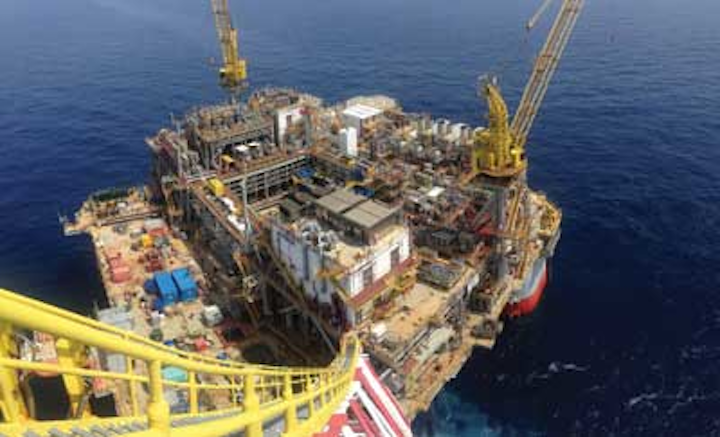 On the drilling front, floating vessels are largely booked for 2015, but the shallow-water jackup market seems to be down. As of late November 2014, the actively marketed US Gulf drillship fleet was almost fully booked for all of 2015, with about 98% of available days already contracted, according to IHS Petrodata. In addition, the semisubmersible fleet is nearly 84% booked for 2015.

In general, those floaters set to roll completely off contract this year are older, less high-spec units. "If they are not able to secure follow-up jobs in the US Gulf, they are likely to be bid on international programs, or be stacked as a last resort," said Cinnamon Odell, Senior Analyst-Rigs for IHS Petrodata. For operators still in need of a floating rig next year, there are also some sublet opportunities available, as well as several rigs currently under construction that are coming up for delivery that do not yet have firm commitments in hand, she added.

The US Gulf jackup market is in a more precarious state than the floater segment for 2015. "As we prepare to enter the new year, only a little over 8% of the days are already booked for actively marketed rigs," Odell noted. While the past couple of years have seen a turn away from the traditional spot market-style contracting toward term contracting, "in 2015 we are likely to see this reverse," Odell observed. She notes that with so much available capacity, operators can be pickier about the conditions to which they agree. "However, as the number of premium rigs in the region continues to decline, the few remaining should expect to see stronger demand," she noted. "Additionally, if rigs stay idle for too long, they are in danger of being cold stacked in order to reduce costs, which would further reduce availability." 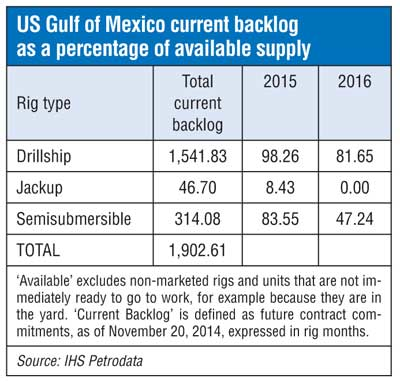 There have been at least a couple of notable discoveries in the Gulf in recent months. In late October, Repsol announced that it had a new oil discovery some 352 km (219 mi) from the Louisiana coast in an ultra-deepwater well named León, located in the Keathley Canyon block 642.

Also in October, Chevron reported an oil discovery at the Guadalupe prospect in the deepwater Gulf. The well encountered significant oil pay in the Lower Tertiary Wilcox sands, the company said. Situated in the Keathley Canyon block 10, Guadalupe lies about 180 mi (290 km) off the Louisiana coast in 3,992 ft (1,217 m) of water. The well reached a depth of 30,173 ft (9,197 m).

Chevron subsidiary Chevron U.S.A., Inc. began drilling the Guadalupe well in June 2014 using Transocean'sDiscoverer India deepwater drillship. More tests are being conducted on the discovery well and additional appraisal wells will be needed to determine the extent of the resource. Chevron U.S.A., with a 42.5% working interest in the prospect, is the operator. Guadalupe co-owners are BP Exploration & Production, Inc. (42.5%) and Venari Resources LLC (15%).

Chevron also announced that it had launched another drilling campaign in the Gulf last fall, when the deepwater drillshipPacific Sharav arrived in the Keathley Canyon area to work under a five-year contract with Pacific Drilling.

ThePacific Sharav is an upgraded dual-load-path, Samsung-12000-design, dynamically positioned drillship, specially modified to accept a dual gradient drilling system, and able to operate in moderate environments and water depths up to 12,000 ft (3,658 m).

"The addition of thePacific Sharav as Chevron's fifth drillship in the deepwater Gulf of Mexico confirms our consistent exploration and development drilling program in the area," said Jeff Shellebarger, president of Chevron North America Exploration and Production Co. "Chevron subsidiaries are among the top lease holders in the Gulf of Mexico, and the area continues to be a key enabler in our growth plans."

For more on deepwater Gulf of Mexico discoveries, see the full survey in this issue starting on page 48.

The Tubular Bells field was discovered in 2003 and sanctioned in October 2011. It is in 4,300 ft (1,310 m) of water, 135 mi (217 km) southeast of New Orleans. The development uses Williams Partners spar-based Gulfstar FPS, which is the first such facility with the major components built on the US Gulf Coast. Hess holds a 57.14% interest in Tubular Bells and is the operator. Chevron U.S.A. Inc. has a 42.86% interest.

In early December, Chevron reported that the Jack/St. Malo project in the deepwater Gulf had come online. The company said that crude oil and natural gas are now flowing from this Lower Tertiary project.

With this phase coming in on time and on budget, Chevron said the facility is expected to ramp up to a total production of 94,000 b/d of oil and 21 MMcf/d of natural gas and that it has a planned production life of 30 years.

The Jack and St. Malo fields are within 25 mi (40 km) of each other in approximately 7,000 ft (2,100 m) of water in the Walker Ridge area, approximately 280 mi (450 km) south of New Orleans. The fields were co-developed with subsea completions flowing back to a single host, semisubmersible floating production unit located between the fields.

Also in December, Stone Energy Corp. announced that production had started from the deepwater Cardona development in Mississippi Canyon block 29. Production began in late November from the Cardona #4 and #5 wells, which were expected to reach a combined gross production volume of 12,000 boe/d over a four-week period.

Cardona is a subsea tieback to the Stone owned and operated Pompano platform about 120 mi (193 km) southeast of New Orleans. First oil was produced from the Pompano field in October 1994 after being discovered by BP and Kerr-McGee in 1985.

A recent report by Wood Mackenzie projects that production in the deepwater GoM is expected to reach a new peak of 1.9 MMboe/d in 2016, but may face challenges thereafter. According to the report, this 2016 peak will be driven by new developments and the expansion of older oil fields, and marks the first time production will surpass the previous production peak set in 2009. Wood Mackenzie says that it expects production from 2014 to 2016 to grow 18% annually.

In 2015, Wood Mackenzie forecasts production to increase 21% from the 2014 level, and the impact will intensify in 2016 when the Heidelberg field comes online and the Jack/St. Malo project ramps up. These three fields combined will produce 115,000 boe/d in 2016, the firm says. In addition to new fields coming onstream, redevelopment and extension of older fields will also augment growth.

Last year marked the start of the next significant growth period for the area, says Wood Mac. The production increase this year and next will be driven by several new developments including Delta House, Lucius, and Big Foot, and the expansion of older fields such as Thunder Horse and Mars. In 2016, these five fields will account for 26% of output, according to the report.

After hitting the new peak in 2016, Wood Mackenzie says it anticipates production to plateau for the remainder of the decade. Due to the depletion from legacy fields and a limited number of new fields coming onstream, a lack of growth is expected. The firm estimates that only eight developments will come online from 2017 through 2020, compared to 15 developments from 2014 through 2016.

Imran Khan, GoM analyst at Wood Mackenzie, explained that although the number of fields coming onstream during the latter part of the decade is limited, these are important fields that are going to define the long-term success of the region. "Stones, Shenandoah, and North Platte are part of the Lower Tertiary, which has garnered attention because of the potential to find large discoveries," Khan observed.

However, the economics are currently challenging because of high costs, technological limitations, and low recovery rates, Khan notes. "Unless these obstacles are overcome, it will be difficult for the region to grow in the next decade," Khan observed. "We forecast that production will start to decline after plateauing at 1.9 MMboe/d in 2021.The current slide in oil prices does not help the long-term outlook either, especially if the downward trend continues for a protracted period."

Wood Mackenzie's outlook emphasizes the need for a sustained level of investment to support increases in production. Recent discoveries have been in deeper waters and in emerging plays which require complex drilling and more advanced technologies that are highly capital intensive. Khan explained: "A typical development well in the Lower Tertiary can cost $300 million, as compared to the shallower, more established well-known plays, such as the Upper/Middle Miocene, where development well costs are closer to $100 million."

Consequently, capital spending is expected to increase in the coming years, especially in the emerging plays, according to Wood Mackenzie. "In order to meet our 2015 production forecast, $17 billion in capex will be required, which is 30% higher than 2013," Khan noted. "The Lower Tertiary will make up 21% of this capex and its share will increase to 53% of the total in 2021."

There will be further challenges ahead as the industry moves into the next decade. By 2021, some of the largest fields such as Mars and Mad Dog will have been producing for 15 to 20 years.

The impact from this depletion will be significant. Those fields currently onstream are expected to produce 4.2 Bboe between now and 2021. Based on the average deepwater GoM discovery size of 77 MMboe, almost 55 discoveries would be required to make up this amount.

Furthermore, Wood Mackenzie's outlook underscores that the GoM will continue to see competition increase globally as regimes around the world try to attract capital and open their borders, such as the recent move by Mexico to open its energy sector to foreign companies. The competition will also continue to stiffen because of a sustained level of increase in costs in the GoM, which continue to escalate 5-10% annually, despite the recent softening of the rig market. Khan concluded: "Unless the technology to improve recovery rates is developed and costs are reduced, the operating environment will only become more challenging and it will be difficult for the region to maintain a long-term production growth trajectory."