Seismic companies steel themselves for a challenging year 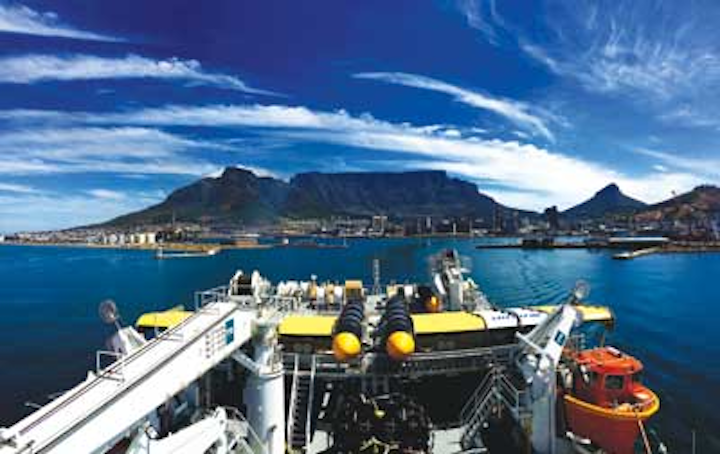 This year's annual global seismic vessels survey was undertaken during one of the greatest periods of uncertainty the oil and gas industry has seen in recent years. Seismic budgets are generally corroborative to exploration and production budgets; in the current climate, the latter may not see a significant share of company budgets. The current fear is that the hesitancy or inability on the part of exploration and production companies to fund or commit to robust exploratory programs will affect money allocated for related seismic surveying. Without new acreage acquired, new data is not necessarily needed.

"With a strong sense that in 2014 the industry was dealing with capacity issues, the drop in oil prices took away the demand side, which makes it difficult for companies to model pricing or vessel utility," International Association of Geophysical Contractors (IAGC) President Ken Wells said.

Tumbling alongside oil prices is confidence in the overall industry. The tight correlation between the two was documented by a February DNV GL report entitled, "A Balancing Act: The outlook for the oil and gas industry in 2015," which surveyed 367 senior international oil and gas executives from all sectors of the industry – operators, suppliers, service companies, and regulators. In fact, DNV GL found that the level at which oil prices and confidence correspond is an astounding 0.96, meaning that they are almost directly linked.

Elisabeth Tørstad, CEO of DNV GL – Oil & Gas, acknowledged this strong correlation, and related the organization's findings to the impact the seismic markets might experience.The dilemma faced is balancing long-term growth or cutting back sharply to respond to short-term pressures, Tørstad said. Historically, seismic budgets are intrinsically tied to exploration and production budgets – depending on the markets, sometimes for better, sometimes for worse.

Without the confidence to proceed with exploration, budgets have been delayed in some cases, causing a ripple affect so that seismic contractors have entered a corresponding period of relative uncertainly. The demand side has become an unknown factor because so many of the oil companies have delayed their own budget processes, Wells explained.

According to the information the company submitted inOffshore's 2015 Global Seismic Vessels Survey, CNOOC-subsidiary China Oilfield Services Ltd. (COSL) put its second seismic vessel, the 12-streamer Hai Yang Shi You 721, into operation in August 2014 and plans to roll out five new vessels over the course of 2015: two survey vessels, one deepwater survey, one 2D seismic acquisition, and one support vessel. Despite the augmented fleet, the company's 2015 guidance echoed in parts the more tempered attitude that is gaining traction in the current seismic vessel market. COSL expressed confidence in its international competitiveness and market adaptability; but said that due to slowed investment resulting from falling crude prices and increased market competition, the company expected a decline in 2015 revenue and operating profit from 2014.

However, Dolphin Geophysical saw a jump in revenues, announcing in its 4Q report that its quarterly revenues rose nearly $92 million over 2014. Revenues for 2014 were $440.2 million, over 2013's $246.5 million. After having expanded its fleet in 2014 with the DNV ICE-1B-classSanco Sword, Dolphin Geophysical will proceed to launch its anticipated purpose-built, high-end 3D Polar Empress during 2Q 2015. Polar Empress will be outfitted with 16 full-length Q-Fin streamers, steering arrangements, and source and control systems from WesternGeco's Q-Marine point-receiver marine seismic system. In its 2015 guidance, the Oslo-listed company said it plans to splash $50- 70 million on multi-client investments and allocate 15-20% of its 3D vessel capacity.

However, it will divest full from the marine 2D and low-end 3D seismic markets in 2015, noting that, in what it described as a challenging market environment, it will focus on positioning 3D seismic vessels, seismic processing, and sales from its multi-client seismic data library.

Fellow survey participant Petroleum Geo-Services (PGS) issued a darker 2015 guidance, noting that the current market has sparked delays in the landing of active tenders. Decreased bidding activity has impacted pricing and led to weaker utilization. It expects nearly a 15-20% decline in square kilometers acquired in 2015 over 2014, and announced that although strong multi-client activity has reduced its earnings volatility, 15% of its capacity will require decommissioning to balance supply with short-term demand. PGS will postpone the deliveries of two newbuilds:Ramform Tethys and Ramform Hyperion.

Although the company elected not to participate inOffshore's survey this year, one of the biggest harbingers for concern was the restructuring of seismic leader WesternGeco. Parent company Schlumberger said in its full-year 2014 earnings release that the downsizing was due to "the expectation of lower exploration spending as a result of lower commodity prices."

Schlumberger said that three older acquisition vessels with lower towing capacity and higher operating costs will be converted to source vessels, allowing for the termination of two third-party leases and the retirement of two owned source vessels. It will also record impairment charges: $806 million.

Electromagnetic Geoservices (EMGS), on the other hand, reported a strongly positive outlook in both the short- and long-terms. The company marked $52.5 million in 4Q revenue, up from $44.9 million in 4Q 2013. It recorded record high multi-client sales, particularly from the Barents Sea.

EMGS expanded into the Alaminos Canyon area of the US Gulf of Mexico, which IAGC Executive Vice President Walt Rosenbush identified as one of the biggest areas for growth.

"Seismic companies as well as E&P companies are looking with great hope as Mexico opens up. There is lot of anticipation in that area," Rosenbush said, noting that the regulations concerned with permitting and licensing are expected to be released soon.

He said that the Gulf of Mexico is the most consistent market for multi-client surveying, due to regular leasing sales held on the US outer continental shelf. In fact, Secretary of the Interior Sally Jewell announced the Draft Proposed Program for 14 potential leasing sales in eight planning areas in late January.

With Mexico open for business following the country's historic energy reforms, Rosenbush said that he facilitated a December 2014 workshop in Mexico City with IAGC member companies and Mexico's regulatory bodies to set up a sustainable plan for seismic investment.

"We are looking for a regulatory process that supports seismic multi-client investment and robust exploration and production investment," he said. "You can understand initially that acquiring data in a frontier area is needed, but what ultimately supports long- term growth are the regulations in place to support long-term licensing and to support multi-client in the future."

Although Brazil is currently considered prime acreage, Rosenbush said that uncertainty surrounding the next licensing round and subsequent permitting has diminished the country's attractiveness to seismic companies. Rosenbush said that he did not anticipate the situation to change in the near future, but noted that IAGC is working with Brazilian regulators to resolve the issues.

"Our role as an association is to remove regulatory roadblocks so that companies can be nimble," Wells agreed.

In order to support seismic data acquisition in the active areas off Australia, New Zealand and elsewhere in the Asia/Pacific region, exploration and production companies will need to express interest in new data.

Although companies might currently shift focus from expanding their asset portfolios to enhancing production from their existing assets, that cannot be the case forever.

Wells warned against companies waiting too long to perform seismic, so that the demand would exceed supply, saying: "Seismic is the way the oil and gas industry finds the oil the world is going to need." He pointed out that companies could even take advantage of the lower prices and day rates defining the current market by carrying out seismic plans now.

Arnstein Eknes, DNV GL Maritime's segment director for Special Ships expressed a similar concern. "If in great need of cutting cost in the short term, stopping or postponing collection of seismic data typically comes first. However, you need good maps to be cost-effective, and there are still vast areas that have not been mapped," Eknes said. In addition, seismic surveys add value to a company at much lower cost than drilling. The coming period will be tough on the market, but access to good data is vital for the industry in the long term."