Growing Asia/Pacific demand for managed pressure drilling (MPD) services along with the associated long lead times for outfitting rigs has spurred industry efforts to integrate MPD systems through retrofitting or with shipyard newbuilds. Three Weatherford MPD drilling applications in the region illustrate the evolution of the technology toward achieving a fully integrated capability on board dynamically positioned vessels. 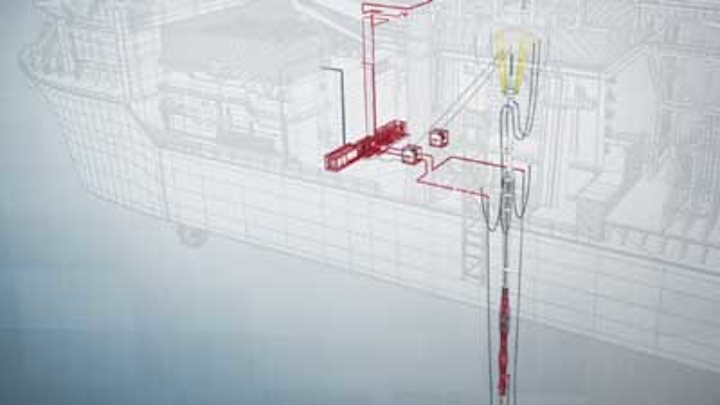 Deepwater drilling is quickly moving toward managed pressure drilling (MPD) methods as a standard, rig-ready capability on floating rigs. This transition is being driven in large part by carbonate drilling in the Asia/Pacific region where MPD provides the only effective means to counter extreme losses of circulation. Over the last decade, pressurized mud cap drilling (PMCD) has made MPD a critical tool for drilling these difficult carbonate formations, especially in offshore settings.

The demand for that capability has fueled an evolution in MPD technology that has grown from basic closed-loop circulation system capabilities on fixed structures to full riser-integrated systems on dynamically positioned drilling vessels. In deepwater venues more than 75 wells have been drilled from floating rigs using MPD, and about 80% of those have been drilled in the Asia/Pacific region.

Growing Asia/Pacific demand for MPD services along with the associated long lead times for outfitting rigs has spurred industry efforts to integrate MPD systems through retrofitting or with shipyard newbuilds. Three Weatherford MPD drilling applications in the region illustrate the evolution of the technology toward achieving a fully integrated capability on board dynamically positioned vessels.

Before MPD was used in Asia/Pacific deepwater applications, it was primarily employed on a contingency basis when conventional drilling methods were ineffective. In 2003, Asia/Pacific operators changed that focus when they began to use MPD on a floating rig to mitigate loss circulation problems when drilling through carbonates. These pioneering applications are some of the earliest uses of MPD. Its continuing success in drilling these wells has played a pivotal role in advancing the technology and its integration on dynamically positioned drilling vessels.

The high use of MPD systems and the prevalence of carbonated systems in the Asia/Pacific region created a strong need to have MPD capabilities already in place on the rigs, instead of waiting for a problem to occur before deployment.

MPD matured as operators gained experience and the technology steadily advanced. Most notably, its application broadened from just tackling the carbonates to increasing the overall efficiency of the drilling process. Operators began to take full advantage of the unique capabilities afforded by a closed-loop circulating system.

In this process, the focus changed from a specific segment of the wellbore (where loss circulation was occurring) to the entire wellbore. With the MPD system in place, there were many opportunities to increase drilling efficiency such as real-time monitoring and managing of wellbore pressures, early kick loss detection, ballooning during connections, and riser gas mitigation.

Broadening the application of MPD to the entire wellbore was also important from the standpoint of fully integrating the system. Integration meant MPD was passive in terms of conducting conventional rig operations, but almost instantly available when needed.

The hallmark of MPD technology and its key differentiator from a conventional circulation system that is open to the atmosphere is the rotating control device (RCD). By diverting annular flow to an automated MPD choke manifold, the RCD effectively creates the closed-loop circulation system necessary for MPD operations. Within this pressurized system, surface backpressure can be monitored and adjusted to respond to small pressure and flow oscillations in the wellbore, and to vary equivalent circulation density (ECD) instantaneously, without changing mud weight, to alter downhole pressure.

For example, the PMCD method of drilling with severe losses uses an under-balanced sacrificial fluid for the drilling fluid, which requires the application of annular pressure on the well while drilling. Doing this requires little more in terms of hardware than an RCD and the MPD choke, which made PMCD a good starting point for developing MPD technology.

The evolution of MPD rig integration is fundamentally the addition of new technologies and experience to this basic PMCD application. This process has produced an entire deepwater MPD system that allows seamless shifting between modes of MPD, from surface monitoring to constant bottomhole pressure and PMCD.

The mechanical core of the RCD is the bearing assembly that seals around the drill pipe while allowing it to rotate. In early marine MPD operations from jackups and platforms, the bearing assembly complicated the rig's conventional operations. Installing or removing it for full bore access or for bearing maintenance required rig-up and rig-down of a bell nipple on top of the BOP. There were also internal diameter restrictions that made changes problematic. In addition, the work took place below the rig floor where it presented risk to personnel and increased the opportunity for spillage.

Adding risers to the mix

The transition from fixed to floating drilling structures introduced a marine riser system to the application of MPD technology. Weatherford performed the first installation of an RCD on a floating rig in 2003. This Riser Cap approach installed a high-pressure Model 7100 RCD on top of the riser.

While the system worked well in dealing with carbonates, it also presented complications and limitations. Among them was the requirement to collapse and fix the riser slip joint to accommodate the RCD riser components, which compromised the heave compensation system. The system was also difficult to switch between MPD and conventional operations. The RCD model does not have an upper flange, which prevents returns through the rig diverter system.

Critically in terms of enabling deepwater applications, the location of the MPD system at the top of the riser above the tension ring also presented an impediment to dynamic positioning because return flow hoses, and choke and kill lines interfered with the tensioner systems. As a result, the system was feasible only with a moored rig.

The key to extending MPD to a dynamically positioned vessel was positioning the RCD system below the tension ring (BTR).

In 2010, the SeaShield Model 7875 BTR RCD became the industry's first RCD to be installed on board a dynamically positioned drillship as an integral part of the marine riser. The objective for deployment on the maiden vessel capable of DP was to drill Indonesian carbonates using PMCD.

The success of the system in this initial application marks a significant point in the extension of MPD safety and operational enhancement into the high-risk, high-cost environment of deepwater drilling. The development of the Model 7875 RCD was a breakthrough in many respects. It contributed to general acceptance of MPD because it was the first to meet the API16 RCD standard. It also helped integration because it provided a standard around which other components could be based. The most notable advance was its integration into the riser system below the tension ring. The step not only removed the conflict with tensioners but also it restored the slip joint and the connection to the rig diverter system and made MPD transparent to conventional drilling.

The system was installed above a termination joint and below a standard slip joint about 140 ft (43 m) below the rig floor and roughly 40 ft (12 m) below sea level. Hydraulic and electrical connections were made below the water line via a subsea-rated hydraulic stab plate. The entire system was installed through the rotary table when the riser and BOP were deployed.

Using this system, the upper part of the carbonate structure was drilled using MPD constant bottomhole pressure (CBHP) methodology. When losses became critical, the MPD mode was changed to PMCD.

The MPD system allowed the well to be drilled safely to its target depth. Since then, the system has been used successfully to drill more than 20 deepwater wells.

Experience led to refinements and additions to the MPD riser kit. In 2013, a full MPD system was deployed on a moored vessel for drilling Indonesia's West Papua carbonate and Makassar Strait's narrow drilling window. For this initial deployment, the MPD system was installed above the tension ring and above sea level.

For the first time, a single service company provided all the MPD components. From top to bottom, the system consisted of a multi-part slip joint, RCD, annular isolation device, and MPD circulating spool.

The 16-well drilling program included 12 carbonate wells. Using MPD achieved a number of objectives. Safety of personnel and environmental protection was paramount in the remote area. MPD provided riser gas mitigation that limited gas ingress and enabled circulation of small volumes of gas out of the riser. It allowed for a synthetic based mud weight of less than 8.5 ppg to be used to drill the reservoir and control formation ballooning.

Managing pressure at + 0.2 ppg over ECD for connections enabled well sections to be drilled more efficiently with less circulating time.

The success of the MPD riser system in a moored application led quickly to its deployment on a dynamically positioned semisubmersible to drill carbonate (and clastic) wells in Malaysia.

The Weatherford MPD riser system used to drill these wells is fully integrated with the riser below the tension ring. The main components of this riser package include an upper adapter spool, a Model 7875 BTR RCD, annular isolation device, MPD flow spool, and a lower adapter spool.

Almost 20 wells have been drilled from dynamically positioned floating rigs. In three of the wells, total loss of circulation was experienced and PMCD was used to manage the conditions.

In another of the wells, PMCD was deployed to drill through severe circulation losses in two hole sections. Two wells were subsequently logged safely through the RCD system despite of total loss of circulation.

Microflux control technology is used to rapidly and accurately apply surface backpressure for immediate detection and control of kicks, and determine the actual pressure profile of the wells while drilling.

In these wells, the system has detected and limited six influxes to less than 3 bbl. MPD is also optimizing operations during tripping, running liner, wireline logging, and perforating.