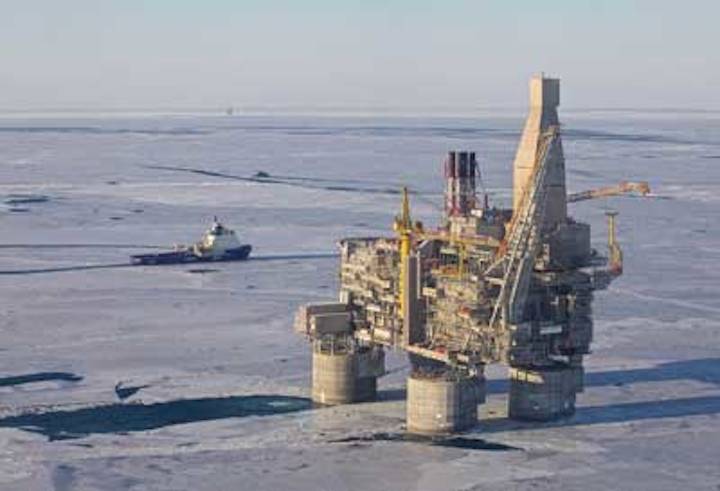 Eni subsidiary IEOC has signed agreements for two offshore blocks in Egypt's deepwater in the Mediterranean Sea. Both are west of the Shorouk block that the company acquired last year. The newly-awarded North Leil and Karawan concessions cover a total area of 9,670 sq km (3,733 sq mi). BP will partner with IEOC in Karawan.

Gazpromneft Sakhalin has been granted sub-soil rights to two license blocks off northern Russia. One is the potentially hydrocarbon-rich Severo-Zapadniy (northeast) block in the Pechora Sea, close to the company's producing Prirazlomnoye field, in water depths close to 200 m (656 ft). The Heysovskiy block is 1,000 km (621 mi) offshore in the Barents Sea, in water depths ranging from 200-500 m (656-1,640 ft). Northern parts of this virtually unexplored block are ice-bound most of the year – the limited data available includes 8,300 km (5,157 mi) of 2D seismic.

ExxonMobil has produced first oil from the Arkutun-Dagi field in the Sakhalin-1 concession, 25 km (15.5 mi) off the northeast coast of Sakhalin Island. The giant Berkut platform can handle production of 90,000 b/d at peak. Partner Rosneft says this is the world's most powerful drilling platform, capable of horizontal well displacements of 7 km (4.3 mi).

McDermott International has completed installation of the 3,086-ton (4,871 metric ton)topsides for the central processing platform (CPP) at the Kepodang gas field offshore Java. The contractor achieved installation via the tight-slot floatover method for Petronas subsidiary PC Muriah. McDermott's scope included construction and installation of the CPP jacket and topsides, a wellhead platform, and a 1.7-mi (2.7-km) 10-in. infield flowline in water depths of up to 230 ft (70 m). The gas will likely head to the Tambak Lorok power plant in Semarang, central Java.

Woodside Petroleum aims to drill an exploratory well this fall offshore South Korea on block 8/6 1N in the deepwater Ulleung basin off the east coast. The block partners have been interpreting data from a 3D seismic survey over the concession.

ConocoPhillips' latest appraisal well proved more gas in the Barossa discovery offshore Australia's Northern Territory, according to partner Santos. Barossa-3, the second of a three-well campaign, was drilled in the Bonaparte basin, 300 km (186 mi) north of Darwin and 9 km (5.6 mi) from the discovery well. Logs confirmed 104 m (341 ft) net pay over the Jurassic Elang formation sands, and analysis indicated an 18-19% carbon dioxide content. Santos said the gas could supply the Darwin LNG scheme. The partners have since spudded a further appraisal well.

Elsewhere in the basin, the first of two new subsea production wells has been completed for the Bayu-Undan Phase 3 development and drilling of the second is under way. Both will be tied into the existing platform facilities, Santos said, with first gas to follow later this year.

Cooper Energy has agreed to acquire a 50% stake from Santos in the VIC/RL3 permit offshore southeast Australia and the associated onshore Orbost gas plant. The $27.5-million transaction is pending regulatory approval.

The concession includes the undeveloped Sole gas field, 65 km (40.4 mi) from the plant, which connects to the Eastern Gas pipeline serving markets in Victoria and New South Wales. Pre-FEED for Sole is expected to be completed next month, with the subsequent full FEED likely to stretch into 1Q 2016, followed by a final investment decision. The partners aim to start gas supplies from late 2018 or early 2019.

New Zealand Oil & Gas and Pan Pacific Petroleum have raised their assessment of recoverable oil in the Tui area in the offshore Taranaki basin by 2.4 MMbbl. This comprises 1.9 MMbbl from the Pateke-4H accumulation and 0.5 MMbbl from other Tui area fields following field life extension reviews. The Pateke-4H well should be tied into the FPSO Umuroa soon, coming onstream during 2Q. AWE is operator of the Tui joint venture.