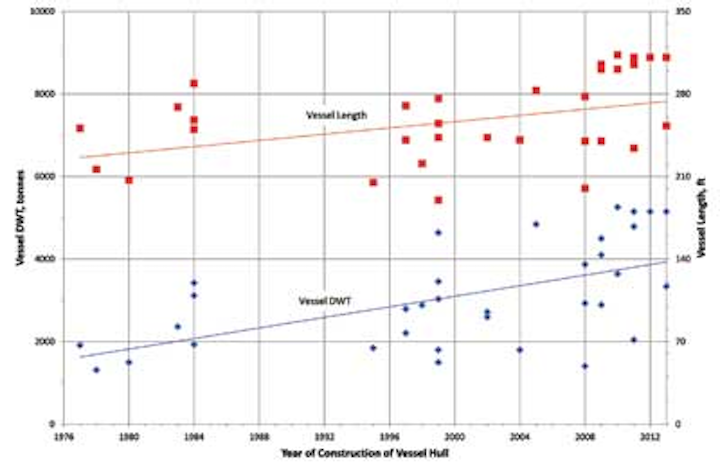 The latest generation vessels incorporate systems that allow acid, water, and additives to be blended without going through an open tub. These closed systems minimize spills and eliminate potentially hazardous fumes. Treatments using the closed automated systems are possible over a wider range of rates than the 1980s generation of vessels, typically from 0.25 to 80 bbl/min. Multiple modes of acid blending are usually available, allowing batch mixing of smaller-volume acid treatments and of specialized stages during larger treatments. Acid strength or percentage usually is confirmed by monitoring with a Coriolis-effect density meter.

New vessels incorporate computer-controlled proppant proportioning systems for accurate and reliable delivery of the proppant. Older vessels have manual or semi-automatic systems (although these have generally been upgraded to fully automatic over the years) fitted to them. The blender tubs are often directly under the proppant silos, to simplify the proppant and eliminate belt-delivery systems used by some of the previous vessels. The proppant bin is usually divided into compartments, with smaller compartments for specialty proppants. The slide gates positioned and the bottom of the proppant silos open and close from the control room, and the entire proppant delivery schedule can be preprogrammed.

Custom-embedded microprocessors control all chemical and proppant additives. The entire stimulation plant is controlled from inside the control room. Touch-sensitive control software allows the operator to switch valves, adjust loadings, and control the high-pressure pumps. Wireless touch-sensitive panels are used. These allow operators and technicians to walk the vessel while operating the equipment, usually during maintenance or commissioning. The heart of the monitoring system is an embedded data acquisition system that gathers and transmits data to the analysis software.

HSE plans ensure that all related issues are addressed during the project cycle. This includes a concept risk assessment (CRA), a build and installation risk assessment (BIRA), and a project risk assessment (PRA). Over the past 30 years, service companies have gained knowledge and experience in stimulation vessel operation. This expertise has been used to develop analysis techniques such as NORSOK S-002 and S-005, from which the HSE plans for the new vessels are derived.

Seawater as a base fluid

The North Sea is the only major area of offshore stimulation activity that regularly uses sea water to mix stimulation fluids. Not having to store fresh water on the vessel means that additional volumes of acid and/or proppant can be stored instead.

The major difficulty using seawater comes during pumping crosslinked fluids for proppant fracturing, especially high-pH systems such as borates. These systems are fairly easy to use with seawater up to around 185°F (82°C), provided specialized buffering and/or sequestrating systems are used. Between approximately 185°F and 220°F (104.4°C) they become increasingly difficult to buffer and to maintain a pH of above 9.2 at bottomhole temperature (required for the borate ions to crosslink the guar-based polymer). Above around 220°F, these systems require enormous volumes of buffering additives to maintain stability and in addition risk the formation of precipitates.

These problems are primarily caused by divalent and trivalent metallic ions such as calcium, magnesium and iron, as well as a few other more complex species. The traditional approaches of simply adding more buffers or using increasingly sophisticated sequestration systems are becoming less and less attractive. Cost, logistics and environmental compliance all affect the choice of whether to use fresh water.