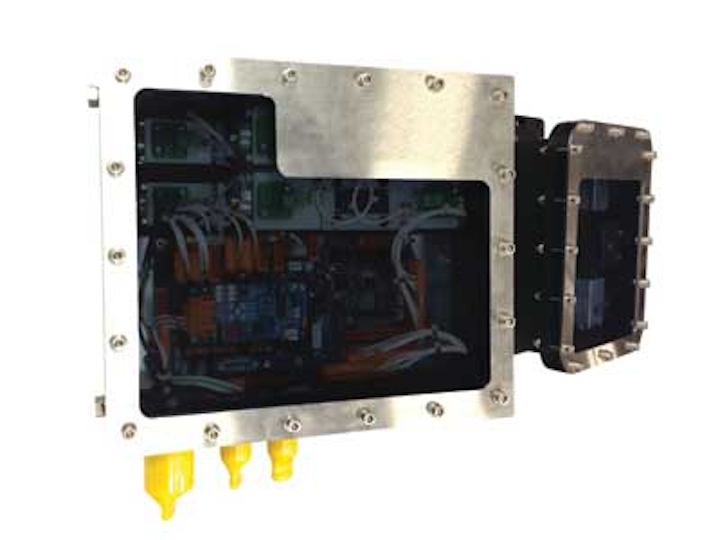 In today's ever expanding deepwater realm, work-class ROVs, the muscle of subsea operations, must perform more than observation and manipulation. The ROV's manipulators are its primary means of operating valves, levers, and mechanical devices on assets without ROV tooling. However, when a valve must be rotated at 1,800 ft-lbs via a torque tool, or when saws are used for decommissioning work, manipulators as standalone devices are insufficient to perform such functions. This also applies when a pipeline must be remediated using an ROV skid.

The commonality of these external kits (skids and ROV tools) is the inseparable linkage to valve packs for actuation to conduct subsea tasks. Categorically, valve packs fall in three subsets: those that are designed exclusively by an ROV manufacturer – with auxiliary valve packs – to enhance its vehicle's intervention capabilities; those built by subsea intervention companies to support their proprietary equipment; and agnostic valve packs designed to be mounted on any ROV.

Agnostic valve packs can benefit and expand the capabilities of ROVs when additional hydraulic lines are required for subsea intervention. Moreover, the trend is toward the use of agnostic systems, while detailing their inner workings and functionality.

To facilitate intensive interventions, today's ROV manufacturers are making greater accommodations to outfit ROVs with sufficient valve packs. Notwithstanding, such projects can quickly deplete the available lines to energize external kits. Similarly, full-fledged ROVs originally manufactured to play a support and/or observational role, but which are later required to play a dynamic intervention role, are limited when fitted with limited valve pack capabilities. This applies as well to older ROV systems whose valve packs are outpaced by current intervention technology and demands.

Many of these scenarios are avoided with the use of agnostic valve packs to ensure an ROV functions in a dynamic role with sufficient hydraulic lines. When it comes to acquiring valve packs for such work, one company may have an abundance of them but do not release them to another company due to the proprietary make up of its valve packs.

The first step to energizing a valve pack is the provision of electrical power and communication. This is achieved by attaching a dry mate connector and whip to a valve pack, and connecting the opposite end to an ROV. The communication protocol used by a valve pack at depth typically comes via RS232 or RS485, which is then converted to fiber-optic data via an ROV's communication infrastructure. This infrastructure equally provides the electrical energy needed by a valve pack. With this in place, the subsea equipment's information can be received by a technician's topside laptop via a purpose-built graphical user interface (GUI), allowing for commands to be sent to a subsea kit while receiving and interpreting data produced by the kit.

Once the valve pack has full power and communication, the hydraulics are addressed. This requires connecting a valve pack to an ROV's pump (output) and tank (return) line. From here, the pressure and tank lines are commonly ported to different valves. The result multiplies an ROV's singular output by 20, when 10 electrically driven, bi-directional valves are employed, which is also referred to as a 10 station valve pack. Moreover, the pressure and tank line can be shared or piggy backed to link additional five station and three station valve packs, to increase an ROV's capabilities.

The bi-directional valves can be proportional or of the "bang bang" type. The former, allows a technician to have full range and control of a valve pack from 0 to 3,500 psi (241 bar). Furthermore, proportional pressure reducing valves can be placed at each bi-directional valve, to regulate the ROV's output pump pressure. The result is full range and control of the pressure and flow output at each independent valve.

In contrast, the bang type valve does not have this range of control. Once engaged it is fully actuated in the intended position. The flow and pressure typically is regulated via cartridges that are preset and installed on the surface. The importance of bang type valves, in spite of this, is that they, too, have 10 station capabilities, with topside controls from a GUI.

In addition, pressure transducers register and relay the incoming and outgoing pressure at all points of interest to a technician's GUI, which ensures that the valve pack and external kits' working pressures are not exceeded. Also, when higher pressures are required that exceed the pressure limitations of a valve pack, high-pressure pumps and/or intensifiers – piloted via a valve pack's hydraulic line – are employed to engage/test a subsea asset.

Compositionally, bi-directional valves on manifold systems are strictly hydro-mechanical, as opposed to being electrically driven. Furthermore, setting the pressure and flow valves on manifold systems via their cartridges are performed manually on the surface. Thus, if flow or pressure adjustments need to be made, an ROV must travel to the surface, which leads to downtime.

Because of the hydro-mechanical design of manifold systems, shifting the bi-directional valves requires external hydraulic pilot lines operated by a valve pack. In a non-intense intervention, this setup is fit for purpose. However, when an ROV must engage multiple external kits, this approach is limited. This is because a four station manifold system requires eight lines since each bi-directional valve employs two pilot lines from a valve pack for actuation (one for each direction). Thus, a manifold system with multiple stations necessitates many external pilot lines. As opposed to transducers that register on a GUI, manifold systems typically use analog gauges that require an ROV camera(s) during operations to monitor that the proper pressure is delivered to points of interest.

From a GUI standpoint, when new ROVs leave production facilities, their auxiliary valve packs cannot meet the global needs of ongoing and future intervention projects. However, agnostic as well as intervention companies with proprietary valve packs are better positioned for this because of their predisposition for such projects. Agnostic valve packs have a greater degree of applicability due to their general market neutrality. Furthermore, valve packs can be outfitted with additional marinized hubs/components that give live feedback – on a GUI – of the components attached to it, such as switches, turns counters, cameras, linear sensors, flow meters, etc.

Moreover, highly complex GUIs are largely designed as a digital extension and representation of the equipment being engaged to facilitate understanding the functionality of a kit at depth. For this reason, an ROV is not required to interpret gauges, as is the case with a manifold system, since all pressure readings register on the topside unit. In addition, GUIs can include a matching flow schematic to further mirror the equipment being employed. This is paramount when remediating blocked pipelines, for example, as it prevents improper valve placement during remediation operations. This, in turn, ensures that a pipeline is not flooded by sea water during operations, which would gravely compound a hydrate.